How to Level Up Fast | Pokemon Sword and Shield 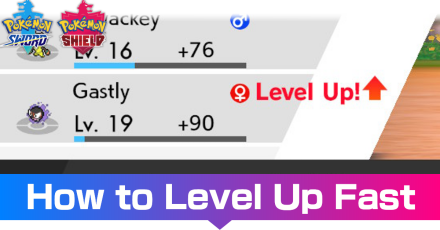 This guide explains how to level up your Pokemon fast in the games Pokemon Sword and Shield. Read on for tips on how to get Exp. Points and Exp. Candy, and other advice for leveling up.

How to Level Up Early in the Game

Raise the Pokemon's Affection stat to 3 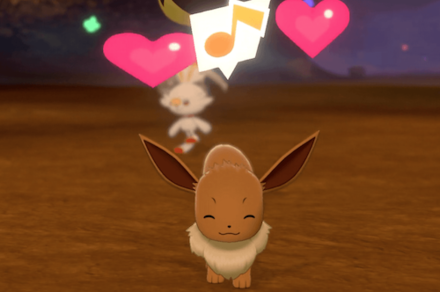 Raising a Pokemon's Affection stat has the side effect of increasing the experience acquired by a Pokemon. Affection can be increased taking a Pokemon with you and walking with it on your adventure, setting up a Pokemon Camp with, making Curry with it, and other activities.

Defeat Trainers around the Map

Trainers found in Routes and Dungeons throughout the game will give comparatively more Exp. Points than wild Pokemon.

How to Level Up in the Middle of the Game

Battle Pokemon on the Map in the Wild Area 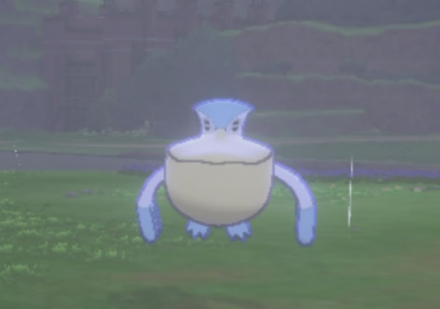 When wandering around the Wild Area, occasionally you will encounter Pokemon which always appear in a fixed spot on the Map. These Pokemon have a higher level than those found in random encounters, so by bringing out a Pokemon with a type advantage, you can bring down these giants and earn a sizable Exp. Point reward for it.

How to Level Up Late in the Game

You can quickly gather huge hauls of Exp. Candy as a reward for Max Raids Battles. Every Exp. Candy gives great Exp. Point boosts to one of your Pokemon, especially the XL Size, granting a whopping 30,000 points of experience.

Types and Effects of Exp. Candy

The Basics of Leveling Up

Leveling Up with Exp. Candy 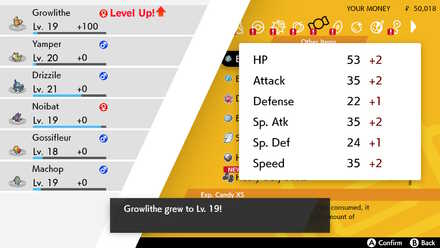 Exp. Candies are items which will instantly grant Exp. Points to Pokemon. This can save lots of time which otherwise would need to be spent grinding, so this is the most recommended way to earn Exp. Points quickly.

Exp. Candies are acquired primarily through Max Raid Battles, so challenging Max Raid Battles is a necessity for those who want to take advantage of this quick and easy method to level up.

Sending your Pokemon on Poke Jobs is an easy way for them to acquire Exp. Points automatically, with the disadvantage that you will not be able to use your Pokemon while they are away on a Poke Job. Your Pokemon can acquire more Exp. Points if their type matches the one requested for the given Poke Job.

Level Up by Playing at Pokemon Camp 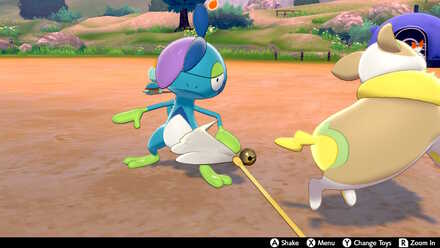 By using toys to play with your Pokemon at Pokemon Camp, and making and eating Curry with them, your Pokemon can acquire a moderate amount of Exp. Points.

Give your Pokemon an Experience-boosting Held Item

When leveling up a Pokemon, giving them a Held Item which increases their earned Exp. Points will take the edge off your daily grind. This can be done automatically simply by playing through the game, as the Exp. points received by a Pokemon holding a Lucky Egg will be boosted even if they did not participate in the battle. Be sure to put this item to use as soon as you obtain it.

How to Train & Breed for Competitive Pokemon

Register as a member and get all the information you want. (It's free!)
Login
Opinions about an article or post go here.
Opinions about an article or post
We at Game8 thank you for your support.
In order for us to make the best articles possible, share your corrections, opinions, and thoughts about "How to Level Up Fast" with us!
When reporting a problem, please be as specific as possible in providing details such as what conditions the problem occurred under and what kind of effects it had.