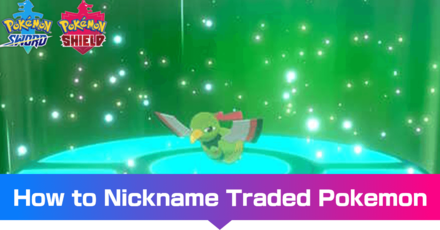 For the first time, trainers can give Nicknames to Pokemon received in trades in the games Pokemon Sword and Shield. Read on to learn how to do it and the restrictions on changing a Nickname.

How to Add a Nickname

In Pokemon Sword and Shield, Name Raters are found in all Pokemon Centers, and they also double as Move Deleters and Move Rememberers. Talk to the Name Rater and ask to change a Traded Pokemon's Nickname. You will be able to do so, but after changing the Nickname once, it will be permanently set.

Keep in mind that you cannot change the Nickname of a Pokemon which was already given a Nickname by its previous trainer.

In order for us to make the best articles possible, share your corrections, opinions, and thoughts about 「Giving Nicknames to Traded Pokemon | Pokemon Sword and Shield」 with us!