How to Beat Champion Leon | Pokemon Sword and Shield 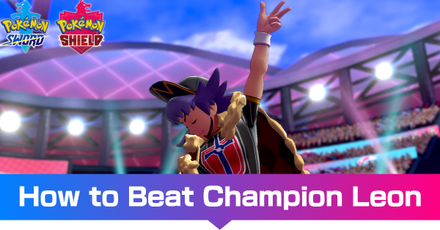 This guide will show you how to beat Champion Leon in both the main Story and in the Battle Tower in the games Pokemon Sword and Shield.

If Starter Pokemon is Grookey

If Starter Pokemon is Scorbunny

If Starter Pokemon is Sobble

Level Up your Pokemon up to 70 or more

Learning the weaknesses of Leon's Pokemon will greatly benefit you as you will be more ready and plan better when making a Pokemon team to battle against Leon. Having a good team with great type coverage will help you get the victory in the battle with Leon.
Type Effectiveness and Damage Output

Stock Up On Items

Before going into battle with Leon, it is recommended to stock up on medicines and Potions, as these will help you in sticky situations during the battle. If you have the money, you should stock up on Full Restore and Max Revive, as having enough of these items can turn the tides of battle in your favor.

This Pokemon will help you greatly in your Pokemon battle with Leon. Leon has 2 Dragon-type pokemon, and you can either use Duraludon or Grimmsnarl to deal with his 2 Dragon-type Pokemon.

If you pick Scorbunny as your starter, Toxtricity is a recommended Pokemon, as he will have a Inteleon and its Electric typing will counter it effectively

If you got Grookey as your starter, be sure to grab a Toxapex, as he will have a Cinderace and its Water typing and high Defense will counter it effectively.

If you have a Sobble as your starter, get Centiskorch, as he will have Rillaboom and you can use this to counter.

These are the Pokemon that are found in Leon's team in the Battle Tower. Take note that Dragapult will only enter the pool of possible Pokemon when you get to Great Ball Tier. Remember that only any 3 of these Pokemon will be used in Leon's team at any one time, so it's best to be ready to deal with a variety of threats.

Train and Learn to Battle

Battle Tower is in a whole new league when it comes to Pokemon Battles, as the opponents will be much stronger and equipped with stronger teams. You won't be able to just spam high-power attacks to win like you can in the main Story. You'll need to use real tactics to win and defeat Leon in the sixth match.

A good place to train is none other than the Battle Tower itself. Battling here will teach you the essence of Pokemon battles, and from this you can learn new techniques for battling strategically. You can observe how the opponents move and you can either learn how to counter, or incorporate their techniques into your own arsenal.
Battle Tower Walkthrough and Recommended Party

If you prefer to make your own team, we'd recommend using some of the Pokemon below, as they can be highly effective for a variety of opponents and are some of the strongest Pokemon in the game.

As you are free to use Legendary Pokemon in the Battle Tower, you can't go wrong with these three, as they have the highest Base Stats of any Pokemon in the game. The mascot legendaries, Zamazenta and Zacian, take some time to obtain after completing the Story, but Eternatus will already be in the player's party by the Battle Tower, so don't hold back on putting it to use.

Congratulations on clearing the Story! But there's still lots more to be done. Keep reading for how to catch Zacian or Zamazenta, how to clear the Battle Tower, and more.

How to Beat Each Trainer

Register as a member and get all the information you want. (It's free!)
Login
Opinions about an article or post go here.
Opinions about an article or post
We at Game8 thank you for your support.
In order for us to make the best articles possible, share your corrections, opinions, and thoughts about "How to Beat Champion Leon" with us!
When reporting a problem, please be as specific as possible in providing details such as what conditions the problem occurred under and what kind of effects it had.