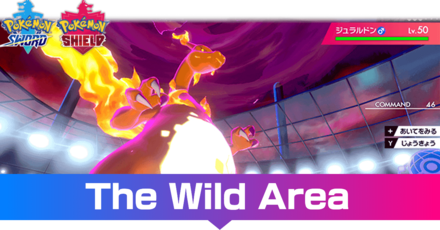 This guide will explain the Wild Area, as well as list maps and show what you can do in the Wild Area. In addition, you will find information on Max Raids, obtainable Pokemon, as well as the different types of weather that occur here.

Today's Weather in the Wild Area

What is the Wild Area?

An area where many wild Pokemon roam freely 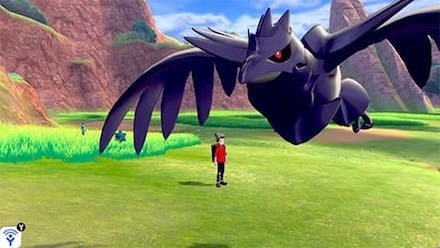 The Wild Area is home to the largest variety of Pokemon in the Galar Region. Since the Wild Area connects to several towns, it bears a resemblance to many of the Routes and Sea Routes of the older games.

Additionally, the weather here is constantly changing, and depending on the weather conditions, the Pokemon that appear here will differ as well. 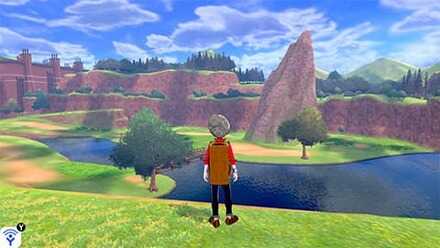 For the first time in the Pokemon series, you can freely control the camera with the right analog stick while in the Wild Area. Pokemon roam freely rather than being encountered randomly in the grass. This means that you can freely look around the large map for nearby obtainable Pokemon.

Communicate with players all over the world 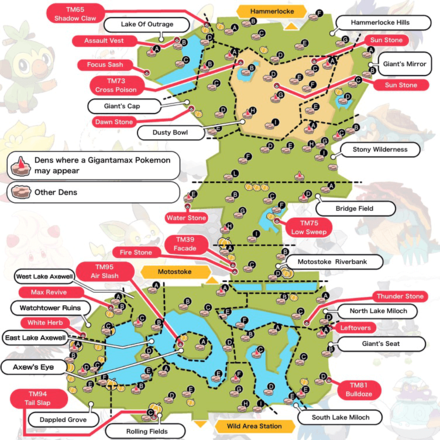 Click the image above for full details on items and Max Raid Dens appearing in the Wild Area!

There are 17 Areas Appearing on the Map

There are 17 areas within the Wild Area, and certain Pokemon are more likely to appear in specific locations there, so use the chart above to check where each Pokemon is found.

The Isle of Armor DLC expands the Wild Area with 16 new areas filled with Max Raid Dens, obtainable items and 150 Alolan Digletts to collect. See our full guide for details on each area!

The Isle of Armor Maps and Pokemon Locations

What Can You Do in the Wild Area? 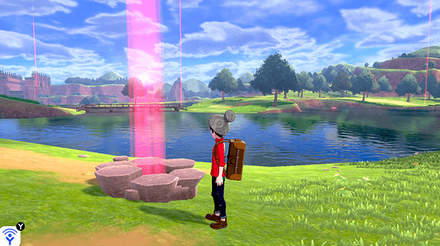 In the Wild Area, you can encounter Dynamax Pokemon. When you see a red beacon of light, called a Pokemon Den, you can approach it to engage in a Max Raid Battle with a Dynamax Pokemon. These massive Pokemon can be defeated and captured to earn lots of great rewards! 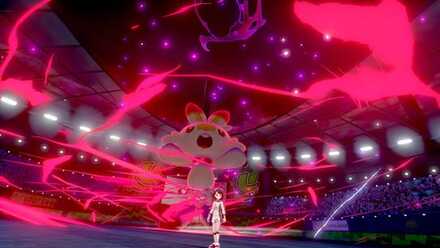 See the link below for more more information on Dynamaxing!
What is Dynamax?

Try your hand at Fishing! 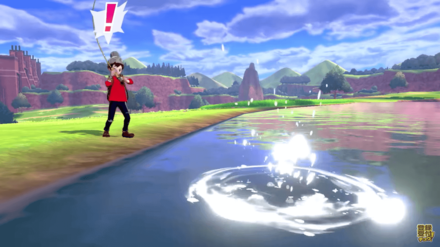 Just like other games in the series, you can fish in bodies of water to catch Pokemon lurking there. Try fishing in the Wild Area after getting a rod! Who know, you might just net a Water-type Pokemon not obtainable elsewhere! 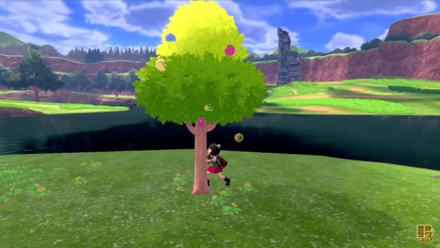 There are many trees with berries within the Wild Area. Harvesting these berries will allow you to use them in battles, and they can also be used as an ingredient for curry! If you see a tree with berries, be sure and give it a shake.

Enjoy Pokemon Camp with other players 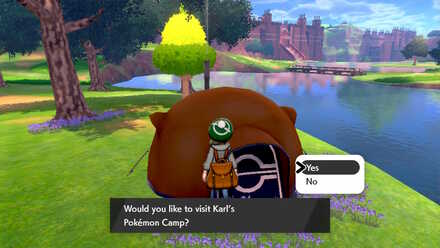 When using Local Connection or Internet Connection in the Wild Area, you may come across other players' tents. By interracting with these tents, you can join the trainers here and camp together.
How to Join Pokemon Camp With Friends 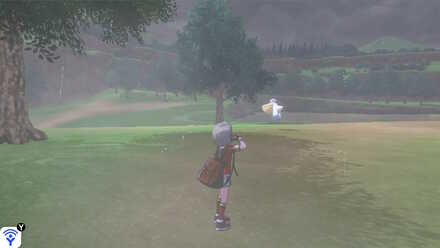 Whistling is a new feature in Sword and Shield, and each Pokemon will react differently to being whistled at. Players can use this feature to attract out-of-reach Flying Pokemon in the Wild Area.

Learn how to whistle and attract Flying Pokemon in the Wild Area by reading our guide below!

How to Whistle and Attract Flying Pokemon

Spend Watts on Items and Upgrades 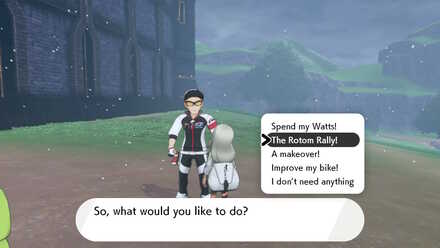 Watts are a currency exclusive to the Wild Area.

When in the Wild Area, you can speak with the people in the area and exchange Watts for items such as a Big Pearl. Learn how to farm Watts quickly by reading our guide below!
How to Farm Watts Quickly 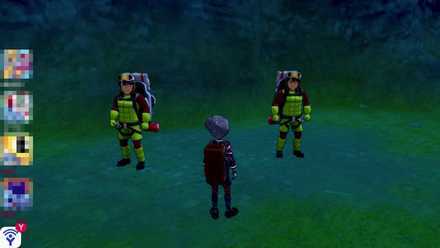 The Digging Duo is two burrowing brothers found standing near the Bridge Field Daycare Center located in the Wild Area. 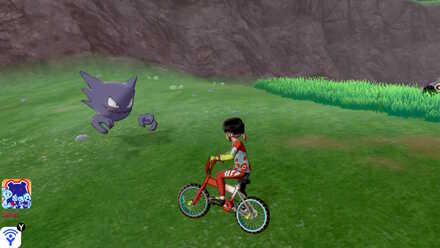 You can try battling against strong-looking pokemon that won't let its guard down. These pokemon roam around the wild area and you can easily spot them as they do not hide behind grasses.

Learn more about the Strong-Looking Pokemon and how will they lower their guards in our guide!

How to Lower a Strong-Looking Pokemon's Guard

How to Join Max Raid Battles 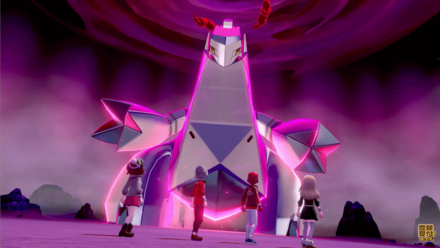 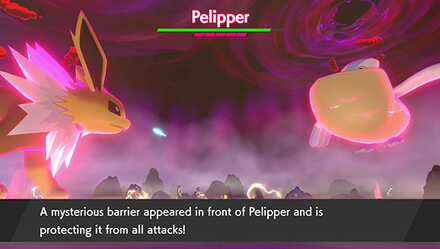 Some rare or Gigantamax Pokemon only appear in specific places, which are called Rare Dens. See the complete list of Raid Bosses and their locations.
List of Boss Raid Locations

How to Beat Max Raid Zeraora 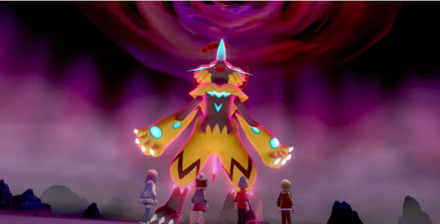 Since 1,000,000 players managed to defeat Zeraora in this limited time, all players were temporarily able to obtain a Shiny Zeraora via Pokemon HOME!

How to Beat Max Raid Zeraora and Item Drops 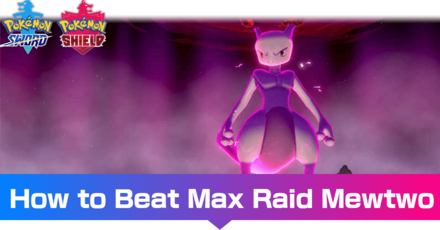 In celebration of Pokemon Day 2020, Mewtwo was available in Max Raid Battles for a limited time. However, it turned out to be far stronger than any Raid Boss ever seen before.

Undoubtedly one of the toughest opponents in the series, we designed the best teams to defeat this Legendary Pokemon. See our guide for strategies and more!
How to Beat Max Raid Mewtwo and Item Drops

There are 9 types of weather

There are a total of nine weather patterns, and the Pokemon that can be found differ depending on the present weather condition. The weather also depends on the particular location of the Wild Area you are in, so experiment with different locations and weather patterns when trying to capture a specific Pokemon.

Types of Weather and List of Pokemon Obtainable There

Register as a member and get all the information you want. (It's free!)
Login
Opinions about an article or post go here.
Opinions about an article or post
We at Game8 thank you for your support.
In order for us to make the best articles possible, share your corrections, opinions, and thoughts about "Wild Area and Raid Strategy | Wild Area Maps" with us!
When reporting a problem, please be as specific as possible in providing details such as what conditions the problem occurred under and what kind of effects it had.