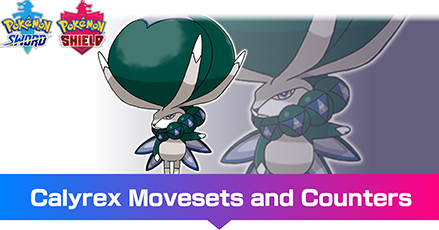 This is a strategy guide for using Calyrex in competitive play for the games Pokemon Sword and Shield. Read on for tips on the best Nature, EV spreads, Movesets, and Held Items to use with Calyrex, as well as its strengths and weak points. 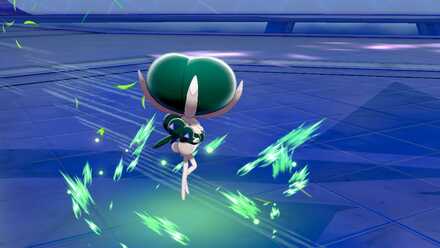 Calyrex's mediocre Special Attack stat can be bolstered by Choice Specs. This Pokemon is host to a good number of Special Move options, making Calyrex a tricky Pokemon to go up against if positioned well.

Psychic is Calyrex's primary STAB move and lets it hit Poison and Fighting-types for super effective damage. Calyrex's most powerful STAB move is Leaf Storm, which reduces its Special Attack by 2 stages after use.

Pollen Puff is Calyrex's coverage move of choice, while Trick is good for choice locking opponents into moves, putting them into disadvantageous situations.

Unnerve is Calyrex's only Ability. This stops opposing Pokemon from consuming held Berries. 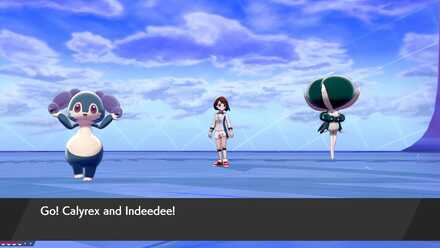 Base Form Calyrex may not be the most powerful restricted Pokemon, but it might be able to find a niche as gimmicky support. With careful move and Pokemon selection, Calyrex can find its place in some teams.

Trick Room is a great form of speed control. Reversing turn order can help Calyrex or other slower teammates attack ahead of quicker foes.

Calm Mind boosts Calyrex's Special Attack and Special Defense, which Calyrex should Baton Pass to a teammate because it cannot take full advantage of the boosts itself due to its lack of a strong Special Attack option.

Lasty, Pollen Puff is the set's only attacking move, which can also replenish a teammate's HP.

Maximizing HP and Special Attack lets Calyrex be as tanky as it can be, and hit sa hard as possible.

The remaining EV's are then put into Special Defense so that Calyrex can better take special moves.

Unnerve is Calyrex's only Ability. This stops opposing Pokemon from consuming held Berries.

Because of its lackluster defenses, Focus Sash gives Calyrex some much needed survivability.

How to Use Calyrex Effectively

Using Calyrex without its steeds requires patience and creativity due to its many weaknesses and meager bulk. With the right team building and redirection support in Doubles however, it can function as a decent offensive and defensive Pokemon that can surprise opposing players.

Use its Other Forms

To use Calyrex effectively, it's best to use one of its other formes. This requires Calyrex to fuse with either Glastrier or Spectrier with the Reins of Unity.

Both formes are a great choice for both balanced and offensive-oriented teams looking for a powerful damage dealer.

How to Build a Team with Calyrex

Redirection support is important for ensuring Calyrex's survival. Bulky special attacking Pokemon at the back of your team is also ideal so that Calyrex can Baton Pass into something that can generate value from the boosts.

Calyrex has access to Trick Room, Calm Mind and Baton Pass which are all decent support choices if Calyrex is allowed to set them up.

Indeedee is a good partner to have because of its ability to redirect attacks into itself with Follow Me. This can allow Calyrex to set up Trick Room. Indeedee can also use Follow Me while Calyrex sets up Calm Mind, which it can then pass to a physically defensive Special Attacker like Torkoal, a Pokemon that can also benefit from Trick Room's speed reversal.

Calyrex can support its teammates by replenshing their HP with Pollen Puff. 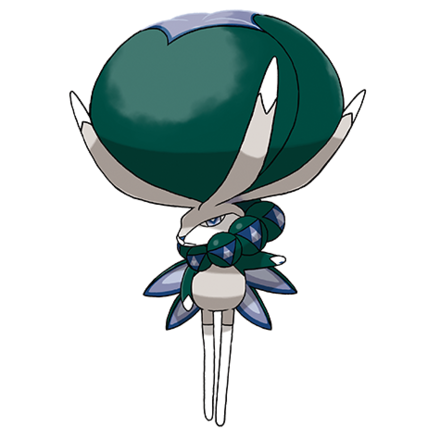 Any super-effective hit should be able to knock Calyrex out with minimal effort. Calyrex's many weaknesses and mediocre defenses stop it from being a viable pick, so teching specifically to counter it may not be the best teambuilding choice. Double-targeting it should easily get rid of a Calyrex with Focus Sash.

In order for us to make the best articles possible, share your corrections, opinions, and thoughts about 「Calyrex - Moveset & Best Build for Ranked Battle | Pokemon Sword and Shield」 with us!