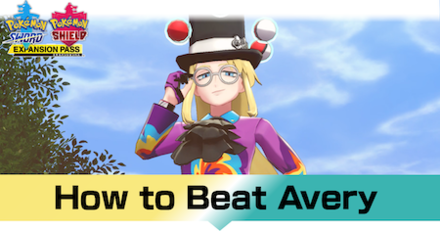 This is a guide to beating Avery, including the Pokemon he uses and how to challenge him, in the Isle of Armor DLC for Pokemon Sword and Shield. Look no further to learn how to handle each of his Pokemon!

How to Beat Avery (First Battle)

How to Beat Avery (Second Battle)

Watch Out For Kadabra

You will fight Avery for the second time in Warm-Up Tunnel. Be sure to heal up your Pokemon before picking the Max Mushroom. Kadabra has high special attack and speed so you should avoid bringing Pokemon weak to Psychic-type attacks.

How to Beat Avery (Third Battle)

In your third fight against Avery, the field will changed to Psychic Terrain. While under the effects of Psychic Terrain, Psychic-type moves will do 1.3 times their normal damage so they will hit much harder than before. Changing the terrain with Grassy Terrain or a dynamax move like Max Lightning can help protect you from this.

During this fight, Avery will dynamax his Galarian Slowbro. It will come out you with Psychic Terrain boosted Max Mindstorm or Max Ooze which boosts its special attack so in order to combat this you should dynamax as well.

How to Beat Avery (Post-Game Battle)

All of the Pokemon that Avery used in the previous match are now fully evolved and he will still dynamax his Galarian Slowbrow. However, since his Pokemon are all the same level as in the previous battle and he won't use Psychic Terrain, as long as you can exploit his Pokemon's weaknesses you should be fine.

How to Rematch Avery

Anytime After Clearing the Story

Once you've cleared the entire Isle of Armor story, speaking to Avery in the Master Dojo will allow you to rematch with him once per day. This is useful for leveling your Pokemon and getting some more money.

Avery appears in the Isle of Armor DLC for Pokemon Shield as your rival. He does not appear in Pokemon Sword.

Levels Vary Based on Story Progress

The Pokemon that Avery uses in battle's level are dependent on how much progress you've made in the Gym Challenge of the main game. This article shows the max levels of the Pokemon after clearing the main story and its post-game scenario.

Post (0 Comments)
Opinions about an article or post go here.
Opinions about an article or post
We at Game8 thank you for your support.
In order for us to make the best articles possible, share your corrections, opinions, and thoughts about "How to Beat Avery" with us!
When reporting a problem, please be as specific as possible in providing details such as what conditions the problem occurred under and what kind of effects it had.