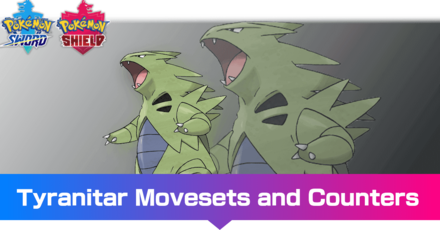 This is a strategy guide for using Tyranitar in competitive play for the games Pokemon Sword and Shield. Read on for tips on the best Nature, EV spreads, Movesets, and Held Items to use with Tyranitar, as well as its strengths and weak points.

Tyranitar's great mixed bulk and boosted special defense in Sandstorm make it one of the better Weakness Policy users in the metagame.

This build works best as a Lead, using Dynamax to boost Tyranitar's natural bulk even further and fire off powerful Max Moves that support the team and weaken the opposition.

Stone Edge is Tyranitar's strongest STAB move thanks to its increased chance to deal a critical hit. Crunch is its secondary STAB and hits Psychic and Ghost-types hard, and can KO frailer sweepers.

Ice Punch is its main coverage move and is Tyranitar's only way to deal with Ground, Dragon, and Grass-types that can easily switch in and counter it. Earthquake is its last coverage move and synergizes well with Stone Edge.

252 HP EVs and 76 Def EVs allow it to survive an Earthquake from Landorus, while 20 Sp.Def EVs let it survive a Hydro Pump from Wash Rotom.

148 Atk EVs let it hit as hard as possible with its attacks, while the remaining 12 Spd EVs let it outrun defensive Pokemon and slower attackers with no speed investment.

This build uses Weakness Policy.. This item that raises the Pokemon's attack and special attack by two stages when hit by a super-effective move. 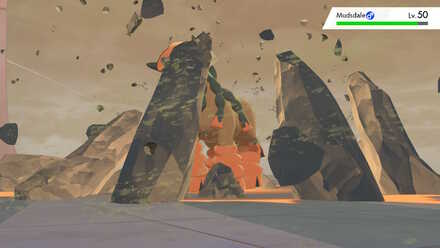 This build further boosts Tyranitar's natural bulk and increased Special Defense in Sandstorm with an Assault Vest, filling the role of a bulky attacker that can easily switch into special attacks targetted at its teammates.

Stone Edge is Tyranitar's strongest STAB move thanks to its increased chance to deal a critical hit. Crunch is its secondary STAB and hits Psychic and Ghost-types hard, and can KO frailer sweepers.

Iron Head is an important coverage move that lets Tyranitar threaten and even KO frail Fairy-types. Earthquake is its last coverage move and synergizes well with Stone Edge.

We're using a straightforward EV Spread with full investment in HP and Attack to boost Tyranitar bulk and ensure it hits as hard as possible. The remaining 4 EVs are placed in Speed so it can outrun slower walls with no speed investment.

This build revolves around the Assault Vest held item, which boosts Tyranitar's Special Defense by 50% but prevents the use of status moves. 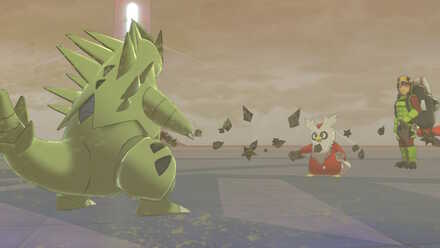 This Tyranitar fills the role of a dedicated lead that supports its team with entry hazards and utility moves that can interrupt the opposing team's strategies.

Taunt is a great utility move that prevents the opposing Pokemon from using Status moves. Since most leads will assume that Tyranitar has an attacking set, you can shut down the opposing lead from using its own entry hazards or prevent setup sweepers from using Swords Dance or Nasty Plot.

Tyranitar can also set up its own entry hazards with Stealth Rock to help its team net important KOs. It also deters Pokemon with 4x weakness to Rock such as Charizard and Talonflame from switchin in.

Rock Tomb is its only STAB move for this build and is more for utility, lowering the opponent's speed stat by 1 stage.

Superpower is this build's last move and is mostly for coverage, hitting the likes of Ferrothorn and opposing Tyranitar. This move lowers Tyranitar's Attack and Defense stat by 1 stage, so it's only used sparingly and if you're planning to switch out Tyranitar later.

We're using a standard physical attacking set for this build, with full investment in Attack and Speed so that Tyranitar can hit hard and as fast as possible. The remaining 4 EVs are placed in Defense to improve its physical bulk. 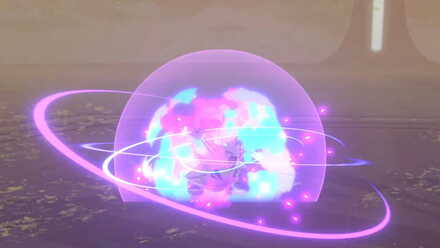 This Tyranitar has enough bulk to shrug off attacks, while still maintaining offensive presence with Dragon Dance and strong coverage moves.

Stone Edge is Tyranitar's strongest STAB move thanks to its increased chance to deal a critical hit.

Fire Punch and Ice Punch are its main coverage moves, allowing it to threaten the likes of Ferrothorn, Garchomp, and Hippowdon, and outright KO frailer sweepers such as Excadrill and Kartana.

It's last move is the most important, Dragon Dance, which boosts Tyranitar's Attack and Speed by 1 stage. Thanks to its natural bulk and ability to force switches, it has plenty of opportunities to set up with the move and boost its offensive presence!

This build uses a more complex EV spread so that Tyranitar has enough bulk and net KOs with its moves.

124 Atk EVs ensure Tyranitar can KO Ferrothorn during Dynamax with Max Flare, while 244 Spd EVs allows it to outrun base 100 Speed Pokemon after a Dragon Dance boost.

The remaining 124 HP EVs, 4 Def EVs, and 12 Sp.Def EVs give this Tyranitar enough mixed bulk to withstand non-super effective moves so that it can get at least one Dragon Dance up.

Focus Sash is the best item for this buld and it ensures Tyranitar can get at least one Dragon Dance up even if the opposing Pokemon uses a strong super effective move.

How to Use Tyranitar Effectively

A Versatile Pokemon that Can Fill Many Roles

Tyranitar is one of the most versatile psuedo-legendary Pokemon in the current metagame. It's a formidable physical attack, can run a specially defensive set effectively in Sandstorm, and can even go with a mixed attacking set to surprise its usual checks and counters.

Capitalize on its Unpredictability

Tyranitar's plethora of builds and role options make it a difficult Pokemon to predict, which is why it's often used as a lead Pokemon.

Leading with Tyranitar and capitalizing on its unpredictability can give you the edge over your opponent in the early game and make battle conditions more favorable for your team!

While Yveltal is one of the stronger Legendaries in the meta, Tyranitar can not only take half damage from its STAB moves, but it can also strike back at Yveltal's weaknesses with STAB moves of its own. Mixed with its 1.5x Special Defense boost during a sandstorm it can reduce that damage even further.

Tyranitar can also target the weaknesses of Shadow Rider Calyrex, Ho-Oh, and Lugia, making it a great choice against Legendary Pokemon.

Best Pokemon to Use With Tyranitar

Tyranitar will likely be targeted by Fighting-type moves, so it is essential to have Pokemon that are strong against Fighting-type Pokemon. It is recommended to use Ghost-types as they are unaffected by these moves, or Flying-types that hit Fighting-types hard.

Pokemon That Goes Well With Sandstorm

Tyranitar's Ability Sand Stream whips up a Sandstorm. Several Pokemon can take advantage of this weather, like those with the Ability Sand Rush which doubles their Speed stat during Sandstorm.

How to Build a Team with Tyranitar

Tyranitar's excellent stats and wide movepool make it a versatile Pokemon that can fit easily in balanced teams, as well as more offensive-oriented ones or a dedicated Weather team.

Great mixed bulk and a 50% Special Defense boost in Sandstorm make Tyranitar an effective Dynamax Lead and has great matchups against opposing Dynamax and Weakness Policy leads in the metagame.

Tyranitar's role in this team is that of a Lead Dynamax user. Thanks to its increased bulk in Dynamax and boosted Special Defense in Sandstorm, it can survive a super effective move and get the boost from Weakness Policy.

Nihilego is a great partner for Tyranitar as it can threaten Tyranitar's Grass and Water-type counters with Sludge Wave and Thunderbolt respectively.

Reuniclus is this team's Defensive Pivot. Its great Defense and Psychic typing gives it resistances to Fighting-type moves that Tyranitar is weak to.

Reuniclus' Magic Guard ability also gives it immunity to Sandstorm's residual damage, allowing it to comfortably switch in between its teammates.

Learn more about building Hyper Offense teams by checking out our full guide below.
How to Build an Offensive Team | Best Hyper Offense Team

A Weather Setter for Sand Teams

Unlike other Sandstorm setters like Hippowdon and Gigalith, Tyranitar isn't restricted to just setting up weather for its team. It can also soften the opposing team with its powerful STAB moves, as well as threaten opposing weather setters with favorable type match-ups.

Assault Vest Tyranitar fills the role of a bulky weather that can still hit hard with its STAB and coverage moves.

Thanks to its held item and the Sandstorm boost, this Tyranitar has an effective 100% Special Defense boost, allowing it to survive super effective Water-type moves from Rain teams!

Excadrill is the best partner for Tyranitar. Its Sand Rush Ability doubles its Speed stat during Sandstorm, allowing it to setup Swords Dance quickly and unleash powerful STAB attacks against the opposing team.

Gastrodon is the team's defensive pivot, filling the role of mixed wall. Its Storm Drain Ability gives it immunity to Water-type moves and also boosts its Special Attack by 1 stage.

Learn more about building Weather teams by checking out our full guide below.
How to Build a Weather Team 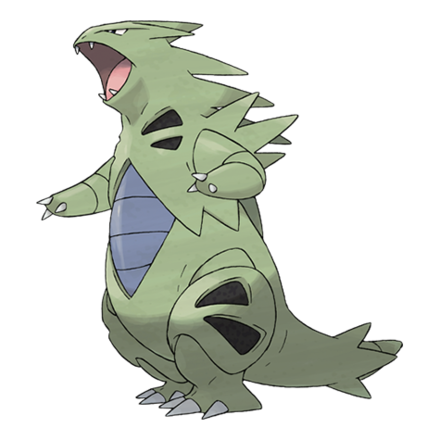 Overpower it with Fighting-type Moves

Cripple it with a Burn

Tyranitar relies on its great Attack stat to hit hard and threaten opposing teams. Inflicting a Burn using moves such as Scald and Will-O-Wisp halves its Attack stat, crippling it for the rest of the match and making it easier for your team to switch in.

Register as a member and get all the information you want. (It's free!)
Login
Opinions about an article or post go here.
Opinions about an article or post
We at Game8 thank you for your support.
In order for us to make the best articles possible, share your corrections, opinions, and thoughts about "Tyranitar - Moveset & Best Build for Ranked Battle" with us!
When reporting a problem, please be as specific as possible in providing details such as what conditions the problem occurred under and what kind of effects it had.