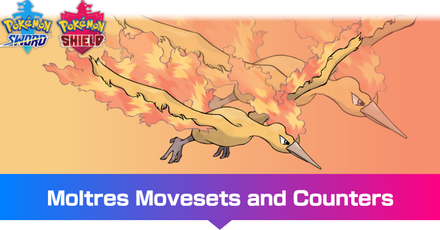 This is a strategy guide for using Moltres in competitive play for the games Pokemon Sword and Shield. Read on for tips on the best Nature, EV spreads, Movesets, and Held Items to use with Moltres, as well as its strengths and weak points. 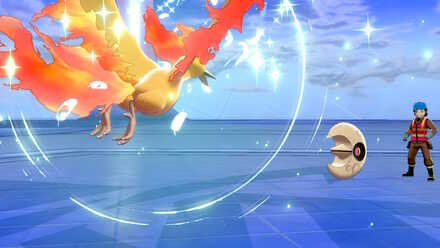 Moltres can fill the role of a special sweeper and is a good choice to round out a team's Fire/Water/Grass offensive core.

Fire Blast serves as this set's primary STAB move. It capitalizes on Moltres' base 125 Sp.Atk to deal as much damage as possible while also offering the chance to burn. It can also be used as Max Flare to set up sunny weather for itself and its team.

Hurricane is its secondary STAB and has a 30% chance to cause flinching. Though harder to use in sunny weather, it does let Moltres increase its speed with Max Airstream.

Scorching Sands is a coverage move that allows Moltres to hit Rock-types, and also has a 30% chance to cause a burn.

Moltres' last move is Solar Beam, another coverage move that allows Moltres to deal with Water and Ground-types. It has fantastic synergy with sunny weather allowing you to fire off the move in one turn instead of two.

This spread maximizes Moltres' Special Attack while also trading out a bit of speed in exchange for a bit of bulk. Thankfully, Max Airstream can give additional speed boosts if needed.

For this build we're choosing to go with Moltres' hidden ability, Flame Body. When Moltres is hit by a contact move, it has a 30% chance to inflict a burn on the attacker.

Partnered with Fire Blast and Scorching Sands, this build aims to spread the burn status across the enemy team. Ideally you should target landing a burn on the enemy's physial attackers to cripple their attack stat.

Life Orb boosts the power of Moltres' moves to give the attacks a little more punch.

Moltres has a niche as a relatively fast stall Pokemon that's best used to counter common defensive Pokemon such as Celesteela and Ferrothorn.

Burn Up has the unique ability of removing Moltres' Fire typing for as long as it stays on the field. When used in conjunction with Roost, its main recovery move, it also gets rid of its Flying-typing for that turn.

This combination essentially removes all of Moltres' weaknesses, leaving behind a surprisingly durable wall with a reliable form of recovery.

Moltres can now even face threats such as Tyranitar or Landorus who would otherwise scare Moltres away with Rock-type attacks. With Will-o-Wisp, Moltres can retaliate by burning these key physical attackers.

We're maximizing the distribution of EVs to HP and Defense to make Moltres as bulky as possible.

This build revolves around its Pressure ability, which causes the opposing Pokemon to lose 2 PP instead of 1.

How to Use Moltres Effectively

The combined boons Moltres gets from its different Max Moves can turn it into a strong attacker. Increase Speed and Special Defense through Max Airstream or Max Quake, while you can empower your Fire-type attacks with the sun from Max Flare.

Use it as a Stall Pokemon

Although it faces competition from Corviknight as a stall Pokemon, Moltres is capable of beating Ferrothorn and Celesteela - two Pokemon that the Raven Pokemon has trouble beating.

How to Build a Team with Moltres

Moltres is a good choice for a team lacking a Fire-type looking to fill out its Fire/Water/Grass core. Its ability to inflict burns through its Ability and moves also make it a great status spreader.

Both Defensive and Offensive Moltres can easily fit in balanced teams that require a Fire Core.

Moltres patches up Rillaboom's lacking coverage while also boasting great synergy with Slowbro. The three form a Fire/Water/Grass core, covering each other's weaknesses and lack of coverage with their typing and moves. 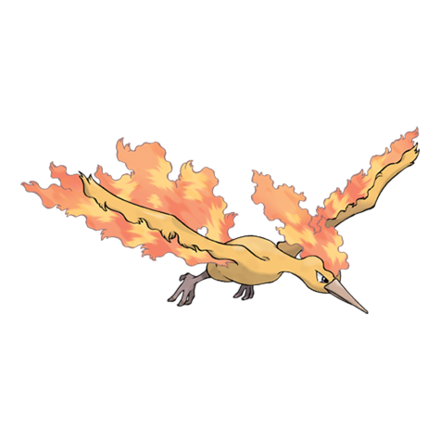 Counter It With Strong Rock-types

Counter It With Special Attacking Water and Electric-types.

Outside of the rare Solar Beam variants, Moltres struggles beating Water-types as they take very little damage from its STAB and coverage moves. Faster Water-types in particular can easily KO Moltres if it doesn't switch.

In order for us to make the best articles possible, share your corrections, opinions, and thoughts about 「Moltres - Moveset & Best Build for Ranked Battle | Pokemon Sword and Shield」 with us!