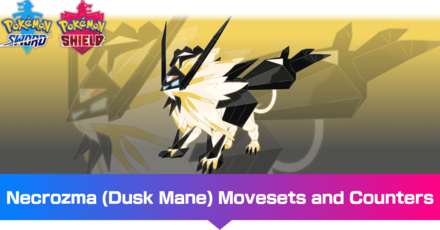 This is a strategy guide for using Necrozma (Dusk Mane) in competitive play for the games Pokemon Sword and Shield. Read on for tips on the best Nature, EV spreads, Movesets, and Held Items to use with Necrozma (Dusk Mane), as well as its strengths and weak points. 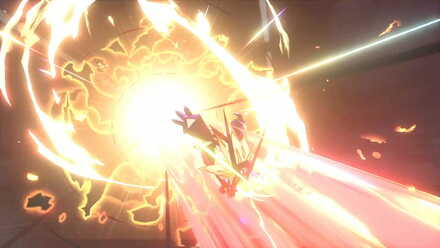 Necrozma's Prism Armor works well with Weakness Policy in that it takes reduced damage from super effective moves, but still benefits from the boost. This makes Necrozma (Dusk Mane) surprisingly durable, and even more so when Dynamaxed.

Rock Blast rounds out your coverage while giving you an attack to deal with Pokemon like Yveltal.

Full investment in HP and Attack helps maximize Necrozma's bulk from attacks on both side of the spectrum, while still garnering enough damage for it to dish out on it's own.

By switching in on a super effective move, Weakness Policy raises Necrozma's offensive stats allowing it to be strong and bulky at the same time. 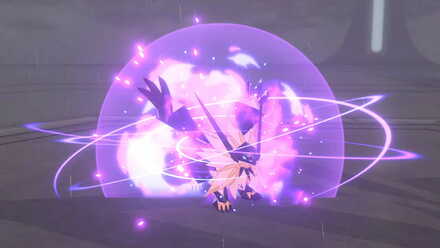 This sets takes boosting into its own hands through the form of Dragon Dance. The increase in Attack and Speed should set Necrozma up for success,

A standard Physical Attacking Sweeper spread suits this particular build. Maximizing Attack and Speed allows you to deal the most damage as fast as possible.

Lum Berry safeguards Necrozma (Dusk Mane) from statuses such as Burn or Paralysis that would otherwise cripple its offensive prowess.

How to Use Necrozma (Dusk Mane) Effectively

Necrozma (Dusk Mane) can take the survivability it gains from Prism Armor and translate it into an advantage by increasing its stats through means such as Weakness Policy or Dragon Dance. There are few Pokemon who can solidly take a hit coming from a boosted base 157 Attack stat.

Can Put Up A Fight Against Other Hot Picks

Necrozma (Dusk Mane) can capitalize on the type advantages it has over other hot picks in the metagame. The Steel-type and Psychic-type moves work well against threats such as Xerneas, Zacian, and Eternatus. It is especially strong against Xerneas as it resists Xerneas' moves, while counter-attacking for super effective damage.

How to Build a Team with Necrozma (Dusk Mane)

As a Fairy-type, Tapu-Fini can be a solid teammate for Necrozma who might struggle facing off against Dark-type Pokemon. Misty Terrain also safeguards Necrozma from status conditions that would otherwise cripple it. Tapu Fini can also hold its own which works well with this offensive team.

Incineroar rounds out the core with useful Dark-type coverage and the ability to lower the physical attacks of enemies thanks to Intimidate. With U-Turn, Incineroar can also scout out the enemy's intention allowing you to switch to a more favorable match up.

Necrozma (Dusk Mane) works well with these two Alolan Pokemon and can also cover their Water and Flying-type weaknesses thanks to its STAB Psychic and Steel-type coverage.

Dark-types benefit from the immunity to the Psychic-type. Be wary though as it will take a few turns to whittle down Necrozma(Dusk Mane)'s HP.

We recommend dealing neutral damage first, before finishing it off with a super effective move to avoid giving Weakness Policy variants a stat boost.

Post (0 Comments)
Opinions about an article or post go here.
Opinions about an article or post
We at Game8 thank you for your support.
In order for us to make the best articles possible, share your corrections, opinions, and thoughts about "Necrozma (Dusk Mane) - Moveset & Best Build for Ranked Battle" with us!
When reporting a problem, please be as specific as possible in providing details such as what conditions the problem occurred under and what kind of effects it had.