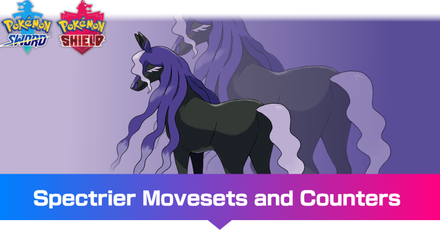 This is a strategy guide for using Spectrier in competitive play for the games Pokemon Sword and Shield. Read on for tips on the best Nature, EV spreads, Movesets, and Held Items to use with Spectrier, as well as its strengths and weak points. 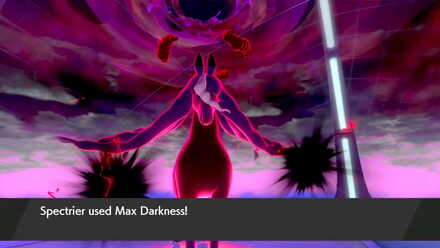 Spectrier's base 130 Speed stat make it an excellent lead in the current metagame and is a good choice for lead Dynamax Pokemon thanks to its ability, which boosts its special attack every time it knocks out an enemy.

Dark Pulse is its secondary attacking move, and while its coverage overlaps with Shadow Ball, allows Spectrier to lower the opposing team's special defense when it becomes Max Darkness during Dynamax.

Hyper Beam is a move that Spectrier should only use during Dynamax to avoid the recharge. It also allows the Swift Horse Pokemon to provide speed control as Max Strike lowers the opposing team's speed by one stage.

It's last move is Will-O-Wisp, which is useful when Spectrier is facing against a Pokemon that can use Sucker Punch, such as Bisharp.

We're using a standard special attacking spread with full investment in Special Attack and Speed so that Spectrier hits hard and as fast as possible. The remaining 4 EVs are placed in Special Defense to further boost its special bulk.

Grim Neigh is Spectrier's only Ability. This Ability boosts the Swift Horse Pokemon's Special Attack by one stage when it knocks out an opposing Pokemon.

Focus Sash ensures it can Dynamax and fire off a powerful Max Move even if it gets hit by an attack taht would otherwise knock it out.

Life Orb, on the other hand, boosts the power of Spectrier's moves by 30% at the cost of some residual damage.

How to Use Spectrier Effectively

Spectrier easily fills the role of a fast special attacker and Dynamax lead. While it can't increase its team's speed with Max Airstream, it can still provide speed control by using Max Strike to lower the opposing team's speed.

Spectrier has excellent Special Attack and Speed, but its shallow movepool means it has low coverage. It's easily walled by Normal or Dark-type Pokemon, with their immunity and resistances negating Spectrier's powerful attacks and boosts.

Spectrier's low move coverage means you need to switch it out often or Dynamax it immediately to ensure it can still support its team with its Max Moves' secondary effects.

How to Build a Team with Spectrier

Spectrier's high Speed and Special Attack but low move coverage limits its usage in most teams, but it has a small niche in Hyper Offense teams.

The following teams show some examples of ways in which Spectrier can be effectively used in a team for Ranked Battle.

Zapdos serves as the Defensive core for the two, using Volt Switch to quickly pivot to its teammates.

Alternatively, you can switch Entei for Cresselia if you prefer a slower approach. Spectrier's Max Strike is useful for this since it lowers the opposing team's speed, letting Cresselia outpace its usual counters and potentially get a Calm Mind boost before the opposing Pokemon.

Vaporeon serves as the defensive core for the two, and it's main role is passing Wish to its teammates to keep them in good condition. 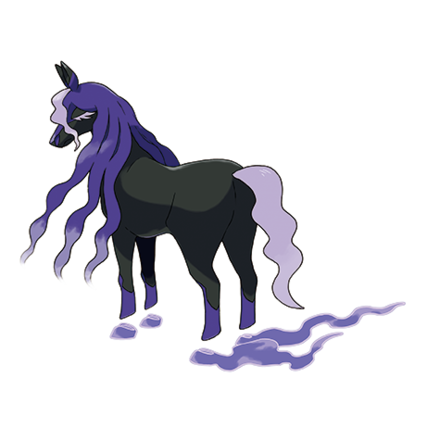 Counter it with a Normal or Dark-type Pokemon

Spectrier's shallow movepool means its easily countered or walled by Normal and Dark-type Pokemon. Many of these counters take little damage from Spectrier's other moves and can even use it as setup fodder.

In order for us to make the best articles possible, share your corrections, opinions, and thoughts about 「Spectrier - Moveset & Best Build for Ranked Battle | Pokemon Sword and Shield」 with us!