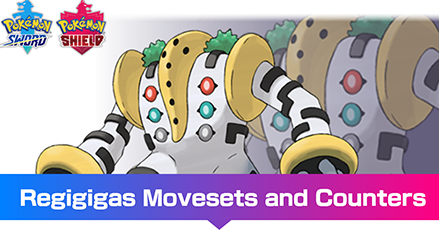 This is a strategy guide for using Regigigas in competitive play for the games Pokemon Sword and Shield. Read on for tips on the best Nature, EV spreads, Movesets, and Held Items to use with Regigigas, as well as its strengths and weak points. 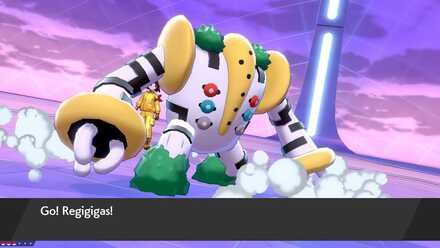 Regigigas is blessed to have impressive stats all around, a really good Normal-typing, and great moves in its movepool. But what sets it back is its horrible Slow Start Ability. with minimal ways to get rid of it in Single battles, Regigigas is forced into a different role than that of 'Attacker'.

Protect is used to stall out a turn of Slow Start. With its relevant stats halved, Regigigas can spread paralysis through Thunder Wave and be disruptive with Knock Off.

The absence of Return and Frustration makes it so Body Slam is Regigigas' most reliable STAB option.

Maxing out HP is a good choice considering it is unaffected by Slow Start. Regigigas' prime objective with this set is to survive as long as it can until Slow Start wears off.

Before that happens, opponents may try to overwhelm Regigigas with offense. Using Protect and Thunder Wave may help let Regigigas survive.

Slow Start is a horrible Ability whose only purpose is to balance out an otherwise amazing Pokemon with amazing stats and moves. Having Slow Start as its ability only serves to impede Regigigas. 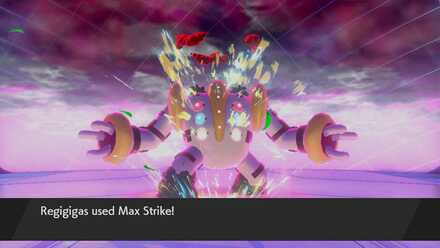 Regigigas aims to Dynamax quickly and gain momentum immediately. Regigigas' Nature, EVs and attack choices all work toward having Regigigas be a Dynamax Sweeper.

Giga Impact ensures that Regigigas' Max Strike is doing the most damage that it can. Ice Punch is great Ice-type coverage. Max Hailstorm is effective at knocking out Pokemon equipped with Focus Sash. A Ground-type move in Stomping Tantrum is also good because it offers good coverage, as well as a powerful Max move in Max Quake.

We maximize Speed and Attack so that Regigigas can attack as quickly as possible. Its base 100 Speed stat is respectable, but what makes Regigigas so powerful is its 160 Attack stat. Even with a Jolly Nature, its Attack stat is still a force to be reckoned with.

Regigigas' awful Slow Start halves its Attack and Speed stats for 5 whole turns. Which is 5 turns too many. Finding ways to remove this Ability is important to Regigigas' success in Double Battles.

Life Orb gives Regigigas a boost to its all-important Attack stat. Because its main purpose is to attack fast and quick, equipping Regigigas with a Life Orb ensures that it can do exactly that.

How to Use Regigigas Effectively

Keeping its partner Weezing (or Galarian Weezing) alive for as long as possible is important for this strategy's success. Make sure to get as much value as possible from Regigigas' Dynamax turns. Score decisive knock outs, deal massive damage.

Reducing your opponent's Speed with a powerful Max Strike is great against Pokemon that are quicker than Regigigas. A Max Hailstorm from its Ice Punch is effective against Pokemon holding Focus Sash.

How to Build a Team with Regigigas

Weezing is an auto-include because of its Neutralizing Gas Ability. Pokemon that have ways of nullifying Regigigas' Slow Start are also welcome.

Lastly, Pokemon that are powerful late-game are also great to have in a Regigigas team because Regigigas aims to go on the offensive immediately.

Regigigas is one of those Pokemon that needs a team to be built around it. Because of its awful Ability, Regigigas needs support in multiple ways.

Being able to remove Slow Start and Dynamaxing Regigigas can spell success for your team because Regigigas has immensely powerful and useful moves that are even more powerful as Max Moves.

Weezing is Regigigas' best friend, being able to turn off Slow Start, provide Will-O-Wisp support and also the occasional Taunt to prevent Trick Room. Keeping it on the field is important for this game plan's success. Alternatively, Durant can use Entrainment unto Regigigas, giving it Hustle and removing Regigigas' reliance on Weezing.

Durant can also function as a back-up Dynamax Attacker should Regigigas fail to set up. 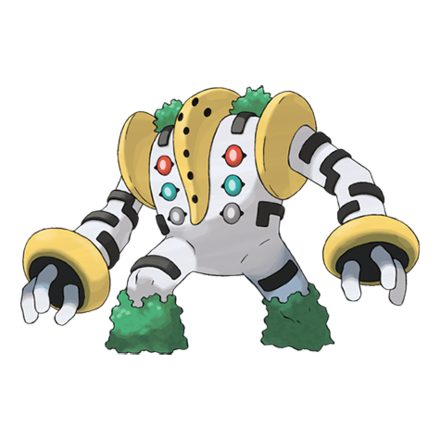 Beat Regigigas by Burning it or Activating Slow Start

Regigigas becomes drastically ineffectual if afflicted with a burn. It loses valuable damage output. In a Double battle, Regigigas player's main game plan would also be to keep Weezing on the battlefield for as long as possible. Knocking out Weezing will reactivate Regigigas' dreaded Slow Start ability.

In order for us to make the best articles possible, share your corrections, opinions, and thoughts about 「Regigigas - Moveset & Best Build for Ranked Battle | Pokemon Sword and Shield」 with us!