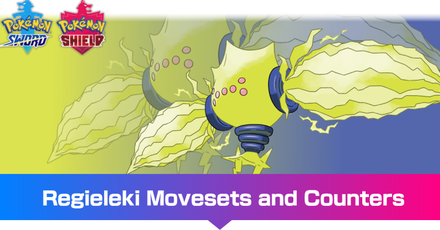 This is a strategy guide for using Regieleki in competitive play for the games Pokemon Sword and Shield. Read on for tips on the best Nature, EV spreads, Movesets, and Held Items to use with Regieleki, as well as its strengths and weak points. 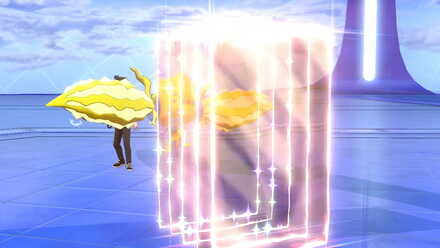 Regieleki is the fastest Pokemon in the metagame, with Ninjask requiring a Choice Scarf to outspeed it. Its lack of coverage moves hinders its role as a sweepr a bit, but it has a place in teams that need a fast special sweeper that can fire off boosted Electric-type moves.

After setting up a wall on the first turn, it can switch into an attack role. It can usually win in a straight-up brawl with opponents who take neutral damage from Electric, making it a wall setter with high offensive potential.

Reflect and Light Screen serve as the bread and butter of this set. Thanks to Regieleki's phenomenal speed, these are the fastest walls that can be put up that aren't from Prankster.

Regieleki's signature move Thunder Cage deals damage and prevents the opponent from switching out. It also deals additional damage at the end of each turn for the next 4 or 5 turns. This is a great move that makes sure you can control the pace of the game.

In the event that you end up in an unfavorable matchup, Volt Switch gives you the opportunity to turn the tides.

The rest of the speed investment is enough to outspeed faster ground types, notably Garchomp with Choice Scarf.

Regieleki's Transistor Ability boosts the power of its Electric-type moves by 50%, allowing it to threaten opposing Pokemon with powerful STAB moves.

Light Clay extends the duration of Reflect and Light Screen letting it last for 8 turns instead of 5. 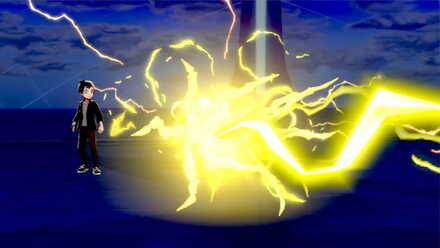 This build puts everything in Speed and Special Attack and pushes Regieleki to its limits as an attacker. Transistor combines with a damage-boosting item to shock the pants off anything in its path, and with max EVs putting the pedal to the medal on Speed, it can even outspeed Pokemon with a base 100 Speed and one Speed stage boost from the get-go.

Thunderbolt serves as Regieleki's main STAB move. It gets boosts from Transistor as well which lets it deal a stronger punch than usual.

Ancient Power is a Rock-type coverage move that may increase all of Regieleki's stats, while Volt Switch gives you an option to switch out of unfavorable matchups.

Hyper Beam can round out the last slot, whereas it may not provide type advantages against enemies, it has some utility when used as Max Strike to lower the opponent's speed.

We're using a straightforward special attacking EV spread with full investment in Special Attack and Speed. The remaining EVs are placed in Special Defense to boost its bulk.

Choice Specs gives a 50% Sp.Atk boost to the user but locks them to only use one move for the time they're on the field. Since Regieleki's movepool isn't so wide anyway, it can easily benefit from this item.

Life Orb gives Regieleki a 1.3x boost to the power of its moves at the expense of 10% of Regieleki's HP. This allows Regieleki the freedom of choice, but at less power and at the cost of it's health.

As one of the fastest support leads in the Doubles battle format, Regieleki has a niche in the current metagame providing unconventional speed support with Electroweb.

Electroweb is Regieleki's main support move and is a multi-target move that lowers the opponent's Speed stat by 1 stage. Protect allows it to scout moves and prevent it from taking damage from its partner's multi-target moves such as Surf or Earthquake.

Rising Voltage is its main attacking move, and becomes a 140 Base Power move when Electric Terrain is present. Regieleki's last move is Volt Switch and allows it to quickly pivot from the battle to another Pokemon if it encounters a check or counter.

We're using a standard Speed spread with full investment in Speed and Special Attack so that Regieleki can hit hard and as fast as possible, with the remaining 4 EVs invested in Special Defense.

As speed control is more prevelant in Doubles, Regieleki needs all the Speed it can get to ensure it can use Electroweb at least once.

Regieleki's Transistor Ability boosts the power of its Electric-type moves by 50%, allowing it to threaten opposing Pokemon with powerful STAB moves.

Focus Sash is a good alternative and allows Regieleki to survive an otherwise fatal hit and use Electroweb again.

How to Use Regieleki Effectively

Regieleki is the fastest Choice Specs sweeper in the metagame, capable of outspeeding even Choice Scarf Pokemon with a Modest Nature. Despite this, its shallow movepool holds it back from dominating the metagame and it has to solely rely on Electric-type moves.

Even with its shallow movepool though, Regieleki should not be underestimated. Its Transistor Ability boosts the power of its Electric type moves and, with a Choice Specs boost, it can heavily damage or even knock out Pokemon that don't resist or are immune to its STAB.

Its speed is especially useful when you consider that you can take down enemy threats who rely on boosting their speed to get ahead, such as Charizard or Gyarados.

Regieleki's high speed allow it to build walls in the face of offensive threats. By reading the opponent's intentions, Regieleki can easily set up the appropriate wall, then proceed to take the enemy out, trap them in, or switch into a favorable match-up.

Many of the threats running around the metagame have Electric-type weaknesses that Regieleki can exploit. Some notable ones include Yveltal, Kyogre, Lugia, and Ho-Oh.

How to Build a Team with Regieleki

Regieleki's shallow movepool holds it back as a sweeper in Singles, and it constantly needs to switch out if it faces a resist. In Doubles, it has a niche as the fastest Rising Voltage sweeper - so long as it's partnered with a Pokemon that can instantly set up Electric Terrain.

Use it in an Electric Terrain Team

To use Regieleki effectively, it needs to be partnered with Pokemon that can provide it some coverage with its moves on top of providing Electric Terrain Support.

Tapu Koko not only sets Electric Terrain with its Electric Surge ability, it threatens Ground-types with Grass Knot that can freely switch into Regieleki.

Use Soak in Doubles

In Doubles, you can patch up Regieleki's abyssmal move coverage by partnering it with a Pokemon that can learn the move Soak. This move hits both targets in Doubles and changes their existing type to Water-type.

On the first turn, Tapu Fini will use Soak to turn the opposing team's Pokemon into Water-types while Regieleki uses Protect. If the opposing Pokemon doesn't switch out, they risk getting KO'd by Regieleki's Transistor-boosted Thunder Cage.

Alternatively, Regieleki can use Electroweb if you're predicting a switch.

Soak is also a good setup sweeper deterent as most attackers rely on their STAB moves to deal boosted damage. 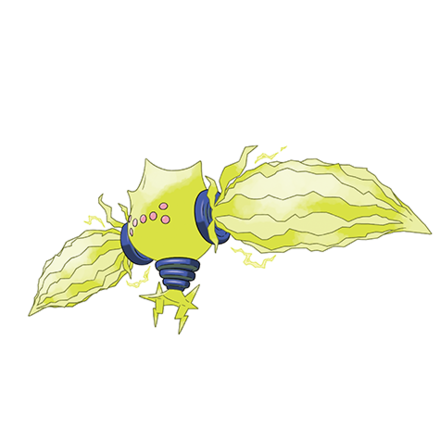 Counter it with a Ground-type

Regieleki is helpless against Ground-types. Not only can they freely switch into all of Regieleki's moves, these counters can set up in front Regieleki without fear of retalation.

Check it with Volt Absorb or Lightning Rod

As Regieleki lacks any notable coverage moves, it's easily shut down by Pokemon with the Abilities Volt Absorb and Lightning Rod.

In order for us to make the best articles possible, share your corrections, opinions, and thoughts about 「Regieleki - Moveset & Best Build for Ranked Battle | Pokemon Sword and Shield」 with us!