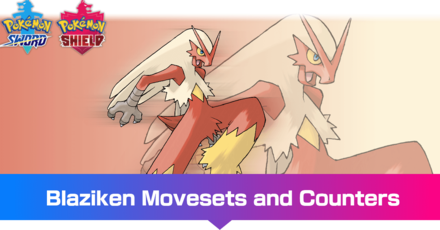 This is a strategy guide for using Blaziken in competitive play for the games Pokemon Sword and Shield. Read on for tips on the best Nature, EV spreads, Movesets, and Held Items to use with Blaziken, as well as its strengths and weak points. 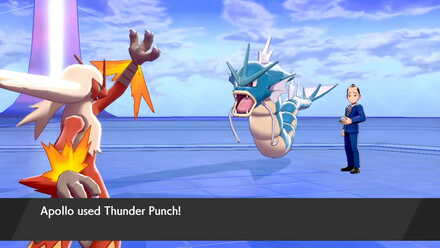 Blaziken is a fast and powerful lead that has the potential to outrun opposing leads thanks to its Ability. Access to both Fighting and Fire-type STAB also make it a great Dynamax Lead that can boost the offenses of its team or change the weather.

Close Combat is Blaziken's main Fighting-type STAB but lowers its Defense and Special Defense by 1 stage after attacking. It becomes Max Knuckle during Dynamax, boosting it and its team's Attack by 1 stage and preventing the defense drops from activating.

Thunder Punch is its main coverage move, hitting Water and Flying-types for super effective damage. Its last move is Protect, which allows Blaziken to get a safe Speed boost from its Ability.

We're using a standard physical attacking EV spread with full investment in Attack and Speed so that Blaziken can hit as hard and as fast as possible. The remaining 4 EVs are invested in Special Defense to round off its bulk.

Speed Boost is Blaziken's best Ability, boosting its Speed by 1 stage at the end of every turn.

Life Orb is the held item for this build. This item boosts the power of Blaziken's moves by 30% at the cost of some recoil damage. 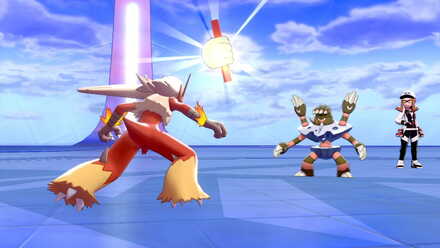 Blaziken remains the most effective Baton Passer in the current offensive-oriented metagame. Unlike other Baton Passers, who are restricted to just support roles, Blaziken can still fill the role of a physical attacker.

Close Combat is Blaziken's main Fighting-type STAB that prevents it from getting shut down by Taunt. Its remaining moves focus on its support role as a Baton Passer.

We're using a standard physical attacking EV spread with full investment in Attack and Speed so that Blaziken can hit as hard and as fast as possible. The remaining 4 EVs are invested in Special Defense to round off its bulk.

Speed Boost is Blaziken's best Ability, boosting its Speed by 1 stage at the end of every turn.

Focus Sash ensures that Blaziken can get at least one Swords Dance and Speed boost and Baton Pass the next turn even if it gets hit by an attack that would otherwise KO it.

How to Use Blaziken Effectively

Blaziken Speed Boost Ability sets itself apart from other physical attackers by being one of the few Pokemon that can potentially outrun the entire metagame if it accumulates enough boost.

As a result, it's one of the most popular leads and finds a place in both Offensive and Balanced teams. Its Fire typing also means it can't get shut down by Will-O-Wisp users.

Blaziken is one of the few and true offensive Baton Passers in the metagame. This means that although its main role is that of a support Pokemon, it can still deal significant damage with its STAB moves - especially if manages to get several Swords Dance boosts!

How to Build a Team with Blaziken

Blaziken's ability to support its team, either through Max Moves or as a Baton Passer means it's easy to fit into many teams. Both offensive and balanced teams appreciate the Swords Dance boosts it provides, and Defensive teams can benefit from the Speed Boost it provides.

A Lead Dynamax for Offensive Teams

Blaziken makes a great lead for offensive-oriented teams due to a combination of great Max Moves and its Speed Boost Ability.

Blaziken serves as this team's Dynamax Lead, firing off powerful Max Knuckles and Max Flares - with the latter boosting the team's Attack stat by 1 stage.

Dragonite appreciates these boosts as although it has its own boosting move, the extra Attack increase lets it threaten even more Pokemon that may think of switching in. Blaziken's Max Flare also sets up Sunny Day, which boosts the power of its Fire Punch.

Landorus Therian serves as this team's offensive pivot, and as a defensive Pokemon, greatly appreciates the Attack boost it gets from Blaziken's Max Knuckle. Max Flare also reduces the power of Water-types moves that it's weak to.

Check out our article below to learn more about building a Hyper Offense team:
How to Build an Offensive Team | Best Hyper Offense Team

A Baton Passer for Defensive Teams

Blaziken fills the role of an offensive Baton Passer in this team, with Ferrothorn being the recepient.

Although Ferrothorn is usually a defensive Pokemon, it has a nice combination of Grass and Steel STAB that allows it to threaten many Pokemon in the current metagame.

Even though it only has 94 Base Attack, Ferrothorn hits surprisingly hard with full Attack investment and can surprise its usual switch-ins once it receives several Swords Dance and Speed Boosts.

Vaporeon serves as the team's defensive pivot, providing Wish and Scald support. It can also Baton Pass its bulky Substitutes to Ferrothorn, although this requires you to Baton Pass twice starting from Blaziken. 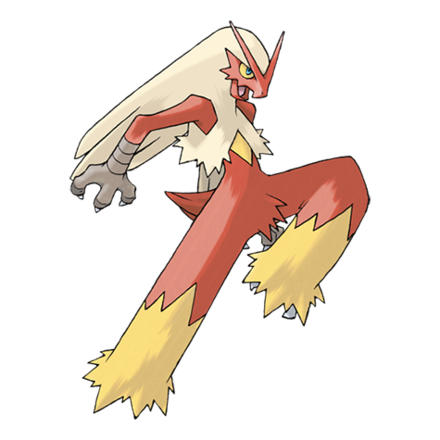 Check it With a Resistant Pokemon

Although Blaziken has the ability to outspeed and potentially overpower the entire metagame, it struggles against Pokemon that take little damage from its STAB and coverage moves.

In particular, it struggles against defensive Pokemon that can cripple it before it has the chance to set up.

Hit it With Priority Moves

Pokemon that have priority moves can bypass Blaziken's Speed Boosts, damaging it heavily and even potentially dealing a KO!

Use a Pokemon with the Unaware Ability

Pokemon with the Unaware Ability can completely ignore all of Blaziken's stat boosts, essentially preventing it from Baton Passing or boosting its team's Attack with its Max Moves.

In order for us to make the best articles possible, share your corrections, opinions, and thoughts about 「Blaziken - Moveset & Best Build for Ranked Battle | Pokemon Sword and Shield」 with us!