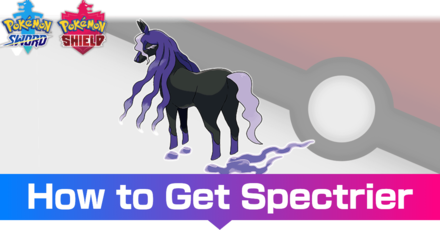 This is a page on the Pokemon Spectrier, including its learnable moves and where it can be found in The Crown Tundra DLC for Pokemon Sword and Shield. Read on for information on its evolutions, abilities, type advantages, and location.

How to Get Spectrier

Spectrier only appears in The Crown Tundra, which is included in the Expansion Pass DLC for Pokemon Sword and Shield.

Spectrier can be caught together with Calyrex at the end of the King of Bountiful Harvest Chapter of the Crown Tundra story.

Choose Between Glastrier and Spectrier

During the events of this chapter, you'll have to choose whether you want to catch Spectrier or Glastrier, so choose wisely during this step of the chapter, as you won't be able to undo your decision later on.

Base Stats of Spectrier

Register as a member and get all the information you want. (It's free!)
Login
Opinions about an article or post go here.
Opinions about an article or post
We at Game8 thank you for your support.
In order for us to make the best articles possible, share your corrections, opinions, and thoughts about "Spectrier - Evolutions, Location, and Learnset | Crown Tundra DLC" with us!
When reporting a problem, please be as specific as possible in providing details such as what conditions the problem occurred under and what kind of effects it had.