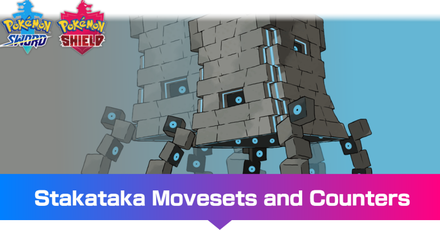 This is a strategy guide for using Stakataka in competitive play for the games Pokemon Sword and Shield. Read on for tips on the best Nature, EV spreads, Movesets, and Held Items to use with Stakataka, as well as its strengths and weak points. 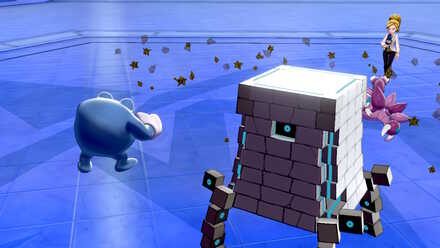 Stealth Rock sets up pointed stones that provide great chip damage to the opposing team. Gyro Ball is Stakataka's main STAB move and will often hit the maximum of 150 Base Power due to the Rampart Pokemon's low speed stat.

Rock Blast is its secondary STAB. While weak, it can hit multiple times, allowing Stakataka to threaten opposing leads that use Focus Sash such as Thundurus.

Protect is its last move. Since Stakataka lacks a viable recovery move, Protect ensures it gets some residual recovery from its held item.

We're using a specially defensive EV spread with full investment in HP and Special Defense, with the remaining 4 EVs placed in Defense.

Stakataka already has a naturally high defense, so boosting its Special Defense ensures it can survive special attacks as well.

Stakataka's only ability is Beast Boost, which increases Stakataka's highest stat when it knocks out an enemy.

Even with a Sassy Nature, Stakataka's Defense stat is still its highest. If it manages to knock out an opposing Pokemon, it will get a +1 Defense Boost.

We're giving Stakataka Leftovers. As it lacks any reliable recovery move, the residual healing this held item provides is invaluable at keeping the Rampart Pokemon healthy throughout the battle. 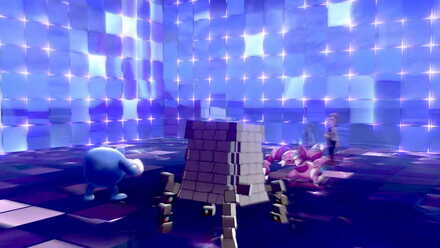 Stakataka is a formidable sweeper under Trick Room, effectively becoming a fast and bulky sweeper once the move orders are reversed.

Trick Room reverses the move order, making slower Pokemon move first instead of faster Pokemon. With an effective 16 Speed at Level 50, there are only a few Pokemon that can outspeed Stakataka under the effects of Trick Room.

Heavy Slam is Stakataka's main STAB, and deals significant damage against lighter Pokemon. Stone Edge is its secondary STAB move and has great neutral coverage with its other move, Earthquake.

We're using a basic physical attacking EV Spread with full investment in HP and Attack, and the remaining 4 EVs placed in Defense.

Stakataka's only ability is Beast Boost, which increases Stakataka's highest stat when it knocks out an enemy.

Even with a BRave Nature, Stakataka's Defense stat is still its highest. If it manages to knock out an opposing Pokemon, it will get a +1 Defense Boost.

Sitrus Berry provides immediate healing as opposed to the gradual healing Leftovers provides, making it the better option in Doubles.

How to Use Stakataka Effectively

Stakataka is an effective sweeper under Trick Room, with its naturally high defenses letting it safely set up Trick Room. Despite this, it's best used in Doubles so that it has adequate support as even with its great defenses, there are Pokemon that can knock it out in one hit.

How to Build a Team with Stakataka

It does have a small niche in Doubles as its great mixed bulk allows it to withstand both physical and special attacks better than other Trick Room sweepers.

Stakataka is a good choice for Trick Room setter in Doubles. Even with little defensive EV investment, Stakataka still has enough bulk to withstand attacks from both its physical and special side.

Indeedee (Female) is a great partner for Stakataka. Not only does it provide Redirection support with Follow Me, it also instantly sets up Psychic Terrain with its ability. This protects Stakaka from Prankster-boosted Taunt from Whimsicott and Grimmsnarl.

Stakataka, in turn, sets up Trick Room which benefits the slow Indeedee as it can then provide some chip damage with Expanding Force. 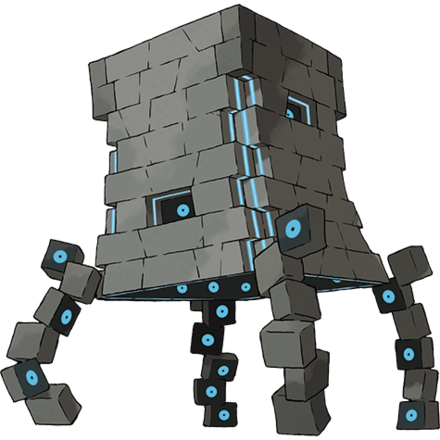 Counter it with a Fighting-Type

Despite its massive bulk, Stakataka can be worn down by Fighting-types.

Oustall it with a Defensive Pokemon

Lack of recovery outside of Leftovers means Stakataka is easily outstalled by other defensive Pokemon - especially those that have Leech Seed.

In order for us to make the best articles possible, share your corrections, opinions, and thoughts about 「Stakataka - Moveset & Best Build for Ranked Battle | Pokemon Sword and Shield」 with us!