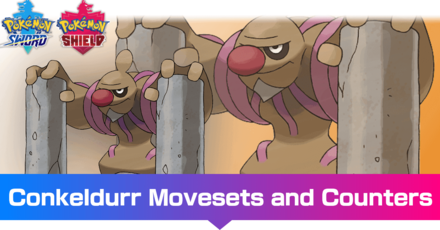 This is a strategy guide for using Conkeldurr in competitive play for the games Pokemon Sword and Shield. Read on for tips on the best Nature, EV spreads, Movesets, and Held Items to use with Conkeldurr, as well as its strengths and weak points.

How to Learn Conkeldurr's Egg Moves 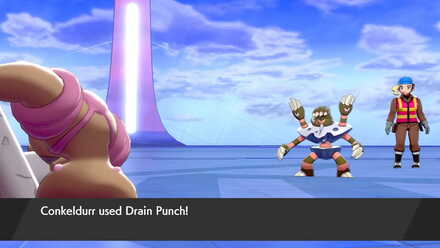 Its Hidden Ability Iron Fist increases the power of its punching moves. This build focuses on this bonus by stacking Conkeldurr with 4 square punches. Starting with the priority punching move Mach Punch, Conkeldurr's ability to learn a variety of useful punches combined with its high Attack makes this a great set for heavy hitting.

When holding the Expert Belt, it can faint a Galarian Darmanitan with no EVs in HP in a single hit with Mach Punch.

This set utilizes the Ability Guts which increases the Attack stat when inflicted by status conditions. By holding Flame Orb and getting burned, Conkeldurr's power is increased while also preventing other status conditions.

HP lost due to the effects of being burned can be recovered by using Drain Punch.

Sheer Force boosts the power of attacks but ignores any additional effects like status conditions. Additionally, attacking with Life Orb does not reduce HP, so this moveset can deal more damage than the previous one.

Drain Punch's power is not increased by Sheer Force, but this also means that HP recovery per hit is retained.

How to Use Conkeldurr Effectively

A heavyweight hitter with an Ability that comes out swinging

Conkeldurr has a massively high Base Attack, and its Ability is also made to further boost its attacking power. As its HP and Defense are also on the high end, there are many situations where it can handle its opponents' attacks with ease.

It can also use the HP-recovery attack Drain Punch, as well as the priority attack Mach Punch, which allow it to survive an opponent's attack and heal the lost HP with Drain Punch, and deal a final blow when on its last legs by getting in a Mach Punch before its opponent can move. 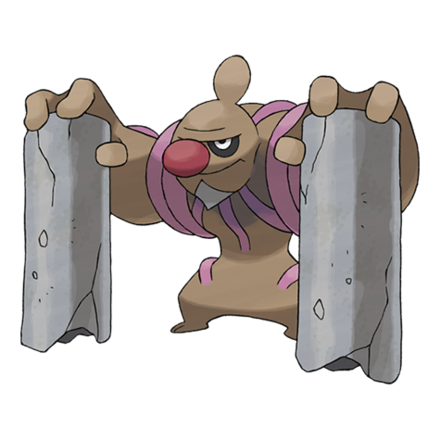 Compared to its high Defense and ability to handle Physical attackers, Conkeldurr doesn't fare so well against Special attacks, which can swiftly take it out.

Weather its attacks with a type-advantageous Physical defender

A strong type matchup can be enough to nullify the power of Conkeldurr's massive Attack. An immunity or resistence to its main weapon of Fighting-type moves can make or break a Pokemon's success against Conkeldurr.

In order for us to make the best articles possible, share your corrections, opinions, and thoughts about 「Conkeldurr - Moveset & Best Build for Ranked Battle | Pokemon Sword and Shield」 with us!