This is a page on the Pokemon Calyrex (Shadow Rider), including its learnable moves and where it can be found in The Crown Tundra DLC for Pokemon Sword and Shield. Read on for information on its evolutions, abilities, type advantages, and more.

How to Get Calyrex (Shadow Rider)

Calyrex only appears in The Crown Tundra, which is included in the Expansion Pass DLC for Pokemon Sword and Shield.

Calyrex appears in its Shadow Rider form when the player has chosen to capture Spectrier by planting the Shaderoot Carrot during the King of Bountiful Harvest Chapter of the Crown Tundra story.

At the end of the storyline, the player will have the opportunity to capture Calyrex in its Shadow Rider form, allowing the player to simultaneously catch Calyrex and Spectrier with a single Poke Ball.

How to Separate Calyrex and Spectrier

Use the Reins of Unity 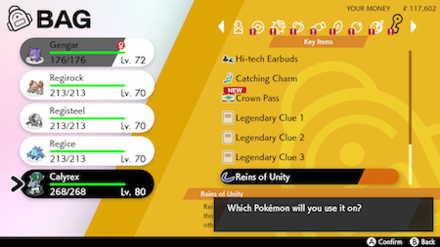 When you originally catch Calyrex, it will be combined with Spectrier into its Shadow Rider form. To separate the two Pokemon, leave at least one open space in your party, then use the Reins of Unity on Calyrex to return the two Pokemon to their individual forms.

Base Stats of Calyrex (Shadow Rider)

In order for us to make the best articles possible, share your corrections, opinions, and thoughts about 「Calyrex (Shadow Rider) - Evolutions, Location, and Learnset | Crown Tundra DLC | Pokemon Sword and Shield」 with us!