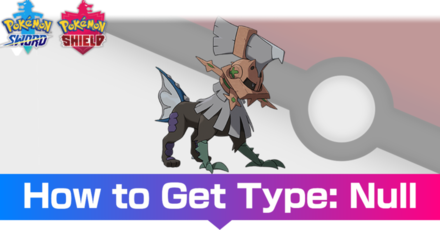 This is a guide to the Pokemon Type: Null, including its Learnset and where it can be found in Pokemon Sword and Shield. Read on for information on its evolutions, abilities, type advantages, and location.

Base Stats of Type: Null

Receive in Battle Tower after Completing the Game

After Completing the Game, the building formerly known as the Rose Tower will have become the Battle Tower. Inside the Battle Tower, on the left side, there is a woman who will give Type: Null to the player.

Like all Pokemon in the Undiscovered Egg Group, Type: Null automatically has at least 3 out of 6 IVs at the maximum value, so it should not take so many tries to get a Type: Null with high IVs and a good Nature.

Things to do after Completing the Game

In order for us to make the best articles possible, share your corrections, opinions, and thoughts about 「Type: Null - Evolutions, Location, and Learnset| Pokemon Sword and Shield」 with us!