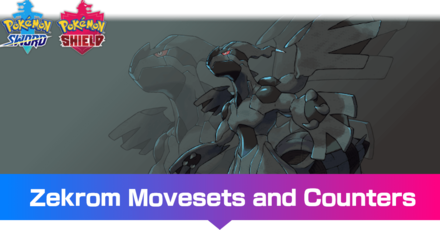 This is a strategy guide for using Zekrom in competitive play for the games Pokemon Sword and Shield. Read on for tips on the best Nature, EV spreads, Movesets, and Held Items to use with Zekrom, as well as its strengths and weak points. 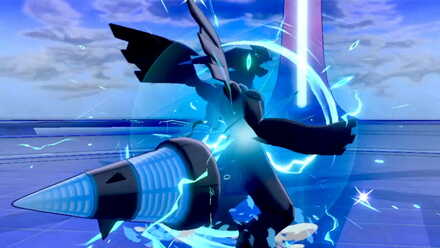 Zekrom's unique dual typing makes it one of the more formidable physical attackers in Ranked Battle Series 8, and is one of the few that can threaten Lugia thanks to its Teravolt Ability.

Bolt Strike is Zekrom's strongest STAB move and has a 20% chance to paralyze the target. It also becomes a base 140 Power Max Lightning during Dynamax, allowing the Deep Black Pokemon to KO Pokemon that don't resist it.

Outrage is its secondary STAB move and provides great neutral coverage, although it locks Zekrom into the move for 2-3 turns before it inflicts confusion. It's best used during Dynamax, where it becomes a powerful Max Wyrmwind.

Dual Wingbeat is a great coverage move, and since it hits twice, allows Zekrom to beat Substitute and Focus Sash users. It also becomes Max Airstream during Dynamax.

Dragon Dance is its last move and allows Zekrom to boost its Attack and Speed by 1 stage. Thanks to Zekrom's overwhelming offensive presence, it has plenty of chances to set up with this move.

We're using a simple physical attacking EV spread with full investment in Attack and Speed so that Zekrom hits hard and as fast as possible, with the remaining 4 EVs invested in Defense to slightly boost its great physical defense.

Teravolt is Zekrom's only Ability and is what makes it a very formidable physical attacker. This Ability ignores Abilities such as Lugia and Dragonite's Multiscale, Mimikyu's Disguise, or Sturdy, allowing Zekrom to attack them directly.

The first is a Life Orb which boosts the power of its moves by 30% at the cost of recoil damage.

The second is a Weakness Policy that raises its Attack and Special Attack by two stages when hit with a super effective move. Thanks to Zekrom's great physical bulk, it can survive a super effective physical move during Dynamax and get the boost.

How to Use Zekrom Effectively

Zekrom is one of the best candidates for main Dynamax Pokemon or even Dynamax Lead for all kinds of teams. Its great dual typing gives it unique coverage with its powerful moves, and its respectable bulk means it doesn't go down easily - even if hit by a super effective attack!

Access to Max Airstream through its Flying-type coverage moves sets it apart from other bulky attackers, making it an even more attractive Dynamax Pokemon.

Zekrom is one of two Pokemon that has access to the Teravolt Ability, which gives it a niche over other physical attackers as it ignores opposing Pokemon's Abilities, such as Lugia and Dragonite's Multiscale and Mimikyu's Disguise.

Despite this, there are some Pokemon whose Abilities ignore Zekrom's Teravolt. These include Necrozma and its two formes who all have Prism Armor.

How to Build a Team with Zekrom

Zekrom is easy to fit into both offensive and defensive teams, although its great mixed bulk means it often finds itself into more defensive-oriented teams.

Use it as a Lead Dynamax for Defensive Teams

Zekrom provides valuable offensive presence for defensive teams, and with the right team building, can stay healthy throughout the match.

Zekrom gives this defensive team some much needed offensive presence, firing off powerful Max Lightnings and Max Wyrmwinds at the start of the battle. Alternatively, it can set up with Dragon Dance if it faces with an opposing Pokemon that can't harm it and then Dynamax afterwards.

Heatran synergizes well with both Zekrom and Clefable, with its dual typing giving it 4x resistance to Fairy-type moves and immunity to Poison-type moves. It can also switch into an opposing Pokemon that's looking to burn Zekrom with Will-O-Wisp or Fire-type moves thanks to its Flash Fire Ability. 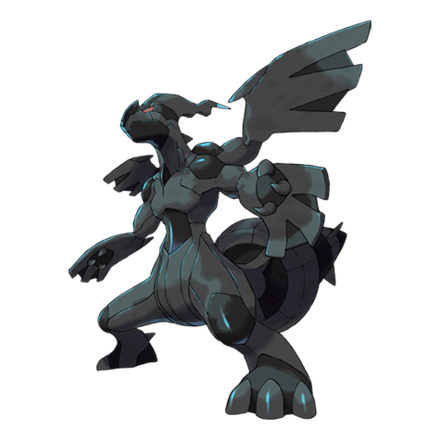 Outspeed it with a Faster Attacker

Zekrom is powerful but it has a rather mediocre 90 Base Speed stat, leaving it outsped by faster Pokemon or those holding Choice Scarf. As such, faster attackers can force it out or threaten the Deep Black Pokemon with their super effective coverage moves.

Post (0 Comments)
Opinions about an article or post go here.
Opinions about an article or post
We at Game8 thank you for your support.
In order for us to make the best articles possible, share your corrections, opinions, and thoughts about "Zekrom - Moveset & Best Build for Ranked Battle" with us!
When reporting a problem, please be as specific as possible in providing details such as what conditions the problem occurred under and what kind of effects it had.