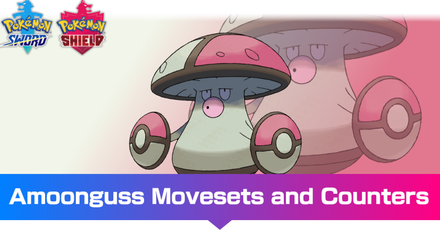 This is a strategy guide for using Amoonguss in competitive play for the games Pokemon Sword and Shield. Read on for tips on the best Nature, EV spreads, Movesets, and Held Items to use with Amoonguss, as well as its strengths and weak points. 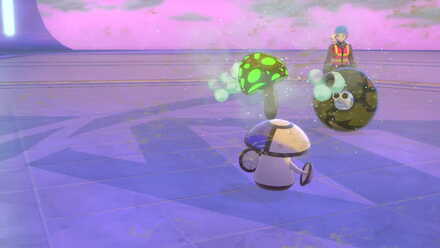 This is the standard defensive set that made Amoonguss famous ever since its introduction in Generation V. It's excellent Grass/Poison dual typing gives it key resistances to some of the Metagame's most common sweepers such as Azumarill, Rillaboom, and Urshifu Rapid-Strike - just to name a few.

Amoonguss' moves allow it to function as a multi-purpose wall. It can put sweepers to sleep with Spore or cripple opposing walls with Toxic, while Clear Smog stops set-up sweepers by nullifying their stat changes.

The remaining EVs go to HP to ensure it makes the most out of the passive recovery from Black Sludge.

Regenerator is the best ability for this defensive set. Upon switching out, Amoonguss recovers 1/3 of its maximum HP!

We're using the Black Sludge ability. When held by a Poison-type Pokemon like Amoonguss, it restores 1/6 of the Pokemon's maximum HP - similar to Leftovers. 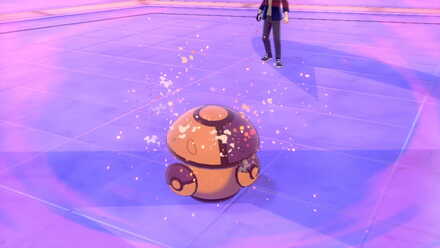 Amoonguss' functions as redirection support in the Doubles Metagame, and can easily find itself in all kinds of teams - from Hyper Offense to more balanced or weather-centered teams. It's unique Grass/Poison typing makes it a great answer to the common Water, Fighting, Fairy, and Grass-type sweepers in the format.

Rage Powder is the most important move for this build, allowing Amoonguss to redirect attacks to it. While similar to Follow Me, it has certain limitations.

Grass-type Pokemon are immune to this move, as well as Pokemon holding the Safety Goggles Item. Pokemon with the ability Stalwart, Overcoat, and Propeller Tail are also immune to Rage Powder's effects.

Check out our article below to learn more about Redirection in the Doubles battle format.

Spore shuts down opposing walls and set-up sweepers while Protect shields Amoonguss from multi-target moves from its ally.

We're using a Calm nature but are investing more EVs on the Defense stat. This is due to the fast-paced and offensive-oriented nature of the Doubles format where defensive Pokemon need to withstand hits from both defensive stats.

Regenerator is the best ability for this defensive set. Upon switching out, Amoonguss recovers 1/3 of its maximum HP!

We're using the Black Sludge ability. When held by a Poison-type Pokemon like Amoonguss, it restores 1/6 of the Pokemon's maximum HP - similar to Leftovers.

How to Use Amoonguss Effectively

Amoonguss' claim to fame is access to the move Spore - a perfect accuracy move that puts the opposing Pokemon to sleep. Opposing Pokemon have a hard time switching in to Amoonguss as it can easily put them to sleep, nullifying their threat for the rest of the battle.

How to Build a Team with Amoonguss

Amoonguss is a versatile Pokemon in both the Singles and Doubles format. It's dual Grass/Poison typing, great bulk allow, and a wide support movepool allows it to easily fit into a variety of teams and synergize with the rest of its teammates.

Thanks to its unique dual typing, Amoonguss has plenty of chances to switch in and function as a sturdy mixed wall. It's best to switch it in on defensive Pokemon like Toxapex or sweepers it completely walls such as Rillaboom and both types of Urshifu.

Amoonguss is especially popular in Weather Teams as it's a great answer to Rain sweepers. Check out our article below to learn more about how to build a Weather Team.

In a Doubles Metagame dominated by Follow Me users such as Togekiss, Clefable, and Indeedee, Amoonguss sets itself apart as a sturdier redirection support Pokemon with better typing.

Though Rage Powder has its limitations, Amoonguss' superior typing allows it to withstand moves from opposing Pokemon that would otherwise KO its competitors.

Check out our article blow to learn how to build a Doubles Team with Amoonguss. 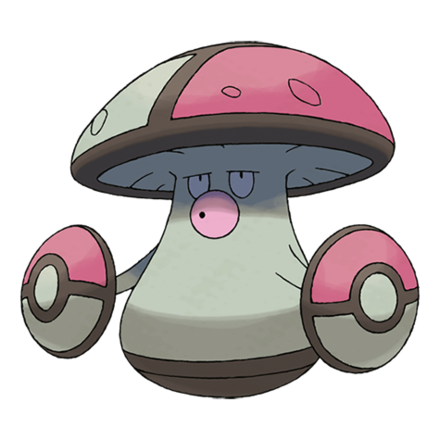 Overpower it with a Strong Super Effective Move

Though Amoonguss' boast great defensive bulk, certain sweepers can overcome its sturdiness and even outright KO it!

Counter it with a Grass-type Pokemon

Grass-type Pokemon make great checks to Amoonguss, especially in Doubles as they are immune to the effects of Rage Powder. Be wary though as Amoonguss may carry Clear Smog or Sludge Bomb!

Ferrothorn is an excellent check to Amoonguss in both battle formats. Not only is it immune to Rage Powder and Spore, its also immune to Poison-type moves and is 4x resistant to Grass-type moves.

In order for us to make the best articles possible, share your corrections, opinions, and thoughts about 「 Amoonguss - Moveset & Best Build for Ranked Battle | Pokemon Sword and Shield」 with us!