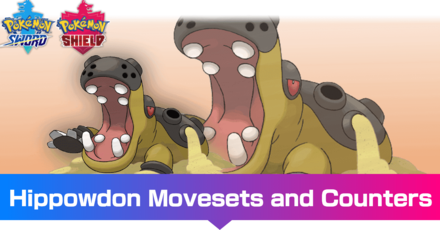 This is a strategy guide for using Hippowdon in competitive play for the games Pokemon Sword and Shield. Read on for tips on the best Nature, EV spreads, Movesets, and Held Items to use with Hippowdon, as well as its strengths and weak points. 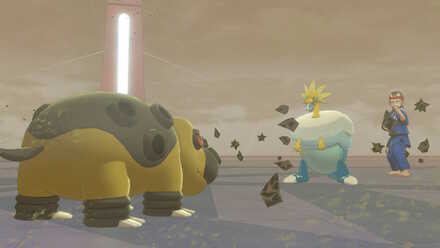 Hippowdon makes an effective lead for Sand-based teams thanks to its Sand Stream Ability, and its excellent Defense stat and access to many support moves let it fill the role of a Entry Hazard setter and phazer.

Yawn and Stealth Rock synergize well and are Hippowdon's main support moves. After setting up rocks, Hippowdon should force switches with Yawn so that the opposing team accrues entry hazard damage.

Whirlwind forcibly switches out the opposing Pokemon and is mostly used against setup sweepers and Sleep Talk users that don't care about Yawn.

Earthquake is its main STAB move and still hits hard depsite no Attack investment. It also allows Hippowdon to do something when it gets hit by Taunt.

Although this build uses an Impish Nature, we're investing 252 EVs in Special Defense to round off Hippowdon's bulk and allow it to better withstand Water and Grass-type moves on its relatively weaker Special Defense.

Hippowdon has several options when it comes to held item.

Figy Berry restores Hippowdon's HP when it drops down to 1/3 of its maximum HP. Since it has an Impish Nature, it won't get confused if it eats it.

Sitrus Berry is another option for more immediate healing when Hippowdon's drops down to half of its maximum HP. 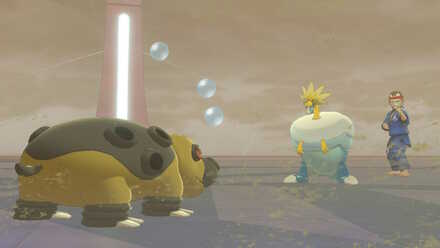 Hippowdon competes with Landorus for the title as Bulky Ground and answer to the metagame's plethora of powerful attackers.

Unlike Landorus, which relies on careful pivoting, Hippowdon has reliable recovery and utility moves which allow it to stay in battles longer.

Slack Off is Hippowdon's most important move and is what separates it from Landorus as a defensive Ground-type.

With a reliable recovery move and Yawn, the Heavyweight Pokemon can stay for longer in battle and phaze out setup sweepers attempting to boost their offensive stats.

Its last two moves are Earthquake and Rock Tomb. The former is a strong Ground-type STAB that still hits hard even without Attack investment. Rock Tomb provides utility, lowering the opposing Pokemon's Speed stat by 1 stage.

This build has a simple defensive EV spread with full HP and Defense investment to make Hippowdon as bulky as possible. The remaining 4 EVs are placed in Sp. Defense to slightly boost its special bulk.

Rocky Helmet is the best held item for this build. Opposing Pokemon that hit Hippowdon with contact moves will get damaged by 1/6th of its maximum HP. 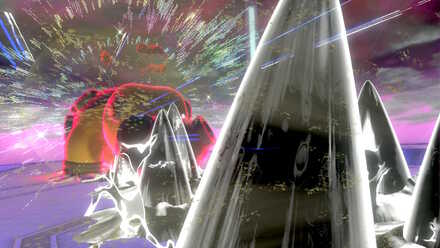 Although better known as a defensive Pokemon, Hippowdon's Base 112 Attack stat makes it a capable physical attacker as well.

Japanese competitive player Oniyan used such a build on their team to reach 3rd Place in Ranked Battles Season 13!

Earthquake is its main STAB move, allowing Hippowdon to threaten or even outright KO Fire, Electric, and Steel-type Pokemon such as Cinderace, Regieleki, and Heatran.

Heavy Slam is a strong coverage move that hits Fairy-types like Mimikyu, as well as Ice-types like Glastrier. Since Hippowdon is heavy, it has increased base power - especially when used against lighter Pokemon.

This move also becomes Max Steelspike during Dynamax, which boosts Hippowdon and the rest of its team's Defense stat by 1 stage.

Its last two moves are to round off its coverage.

Fire Fang, on the other hand is Hippowdon's only way to hit Ferrothron and Grass-types for super effective damage.

236 HP EVs give it great bulky while the remaining 8 EVs are split between Defense and Sp.Defense - with 4 Defense EVs and 4 Sp.Def EVs.

This build uses Expert Belt, which boosts the power of Hippowdon's super effective moves by 20%.

How to Use Hippowdon Effectively

Hippowdon's great stat distribution makes it one of the most reliable physical walls in the current metagame, with the added bonus of having a reliable recovery move.

Access to utility moves, entry hazards, as well as Sand Stream allow Hippowdon to fill a variety of defensive roles as well - from phazer, lead, to weather setter for Sand-based teams.

Despite commonly used as a defensive Pokemon, Hippowdon is no slouch when it comes to dealing damage.

With full investment in Attack, it can fire off powerful Earthquakes and surprise its usual switch-ins with its coverage moves.

How to Build a Team with Hippowdon

Although a quintessential Pokemon in the current metagame, Hippowdon often finds itself in specific teams where its teammates can take advantage of its Sand Stream ability.

As a result, it's often found in Sand-based Weather Teams or those that include a lot of Rock, Ground, and Steel-type Pokemon.

Hippowdon is a great weather setter and lead for Sand-based teams, using a combination of Stealth Rock and Yawn to help its team net KOs by phazing and accruing damage.

Excadrill is the best choice for physical attacker in this team thanks to its Sand Rush Ability doubling its speed during Sandstorm. It can also use Rapid Spin to remove opposing entry hazards.

Since Hippowdon is physically defensive, Gastrodon fills the role of a Special Wall in this team. It's the best answer to Rain teams since its Storm Drain Ability absorbs Water-type moves directed at Hippowdon and Excadrill, boosting its Sp.Atk by 1 stage in the process.

Check out our article below to learn more about building a Weather team.
How to Build a Weather Team

A Defensive Wall for Balanced Teams

Hippowdon is a great choice for defensive Pokemon in balanced teams, with its massive bulk and reliable recovery allowing it to take repeated hits from the metagame's hard-hitting attackers.

The Heavyweight Pokemon serves as the team's Defensive Pivot; both Nihilego and Metagross are weak to Ground-type moves, which Hippowdon can comfortabley withstand while it sets up hazards.

Check out our article below to learn more about building a defensive team.
How to Build a Defensive Team

A Lead Dynamax for Offensive Teams

Hippowdon can surprise its usual counters and switch-ins by filling the role of an offensive, lead Dynamax user that uses Max Moves to support its team.

Both Kartana and Nidoking greatly appreciate these boosts as they are relatively frail, and are often enough to allow them a safe switch into battle.

Hippowdon struggles against Grass and Water-types even with its coverage moves, and that's where Kartana and Nidoking step in.

Check out our article below to learn more about building an offensive-oriented team.
How to Build an Offensive Team | Best Hyper Offense Team 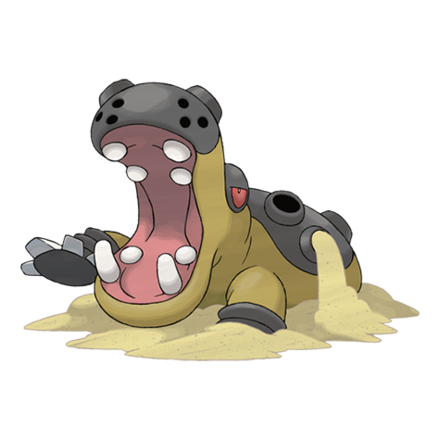 Although Hippowdon has massive defenses, it can get worn down by powerful Water and Grass-type moves - especially if they target the Heavyweight Pokemon's weaker Sp.Defense stat!

Despite Hippowdon's bulk, there are still plenty of outrageously strong physical attackers that can break through Hippowdon's defenses.

Take Advantage of its Low Speed

Hippowdon has a very low Speed stat, which means attackers and even some defensive Pokemon can take distrupt the Heavyweight Pokemon's strategies before it has a chance to act!

In order for us to make the best articles possible, share your corrections, opinions, and thoughts about 「Hippowdon - Moveset & Best Build for Ranked Battle | Pokemon Sword and Shield」 with us!