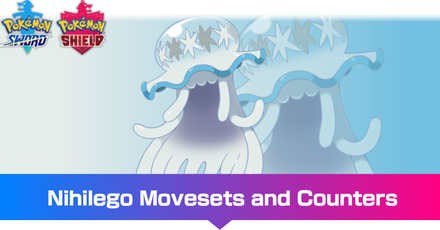 This is a strategy guide for using Nihilego in competitive play for the games Pokemon Sword and Shield. Read on for tips on the best Nature, EV spreads, Movesets, and Held Items to use with Nihilego, as well as its strengths and weak points. 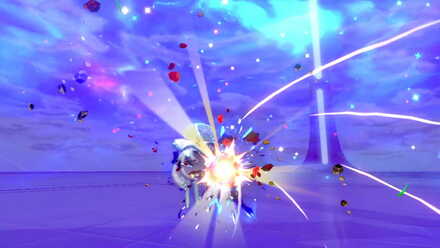 Nihilego is a glass cannon that boasts unique coverage with its Rock/Poison dual STAB. Access to Meteor Beam now gives it a way to boost its Special Attack, as well as a stronger Rock-type STAB.

Meteor Beam is a powerful special Rock-type move that boosts Nihilego's Special Attack by one stage on the first turn, and then attacking on the second turn. With Power Herb, Nihilego boosts its special attack and then attacks immediately afterwards.

It's last two moves are for coverage. Thunderbolt hits Flying-types like Corviknight while Grass Knot lets it threaten Ground-types like Hippowdon.

84 HP EVs lets it take some hits to allow it to set up with Meteor Beam. 252 Speed EVs make it as fast as possible, while the remaining EVs are placed in Special Attack.

Beast Boost is Nihilego's only ability, raising its highest stat every time it knocks out an opposing Pokemon.

Power Herb ensures Nihilego can use Meteor Beam on the same turn. 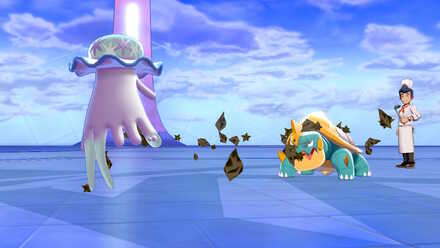 Nihilego can also function as a lead entry hazard setter. Unlike similar leads, it can still attack with its powerful special moves.

Stealth Rock sets up entry hazard, providing great chip damage to the rest of the team while the rest of its moves allow Nihilego to hit at common entry hazard counters. Sludge Bomb and Power Gem are its main STAB moves while Grass Knot hits Ground-types for super effective damage.

We're using a straightforward EV spread with full investment in Special Attack and Speed, with the remaining 4 EVs placed in HP.

Beast Boost is Nihilego's only ability, raising its highest stat every time it knocks out an opposing Pokemon.

Focus Sash ensures Nihilego can set up with Stealth Rock.

How to Use Nihilego Effectively

Use it as a Lead Sweeper

Nihilego's high special attack and speed make it a great, if a bit frail, lead sweeper. Due to the threat of Beast Boost and its main STAB moves, Nihilego is good at forcing switches - allowing it to set up with entry hazards like Toxic Spikes and Stealth Rock or simply firing off powerful Meteor Beams or Sludge Waves.

How to Build a Team with Nihilego

Nihilego faces stiff competition from faster and sturdier leads, especially the likes of Gengar and Dragapult that boast better coverage.

It has a niche in Monotype teams, especially Mono Rock-type teams as these usually lack fast special sweepers.

Nihilego is a great adddition to a Mono Rock-type teams, and will often be the only fast special sweeper in the team. It's Poison-typing STAB also allows it to threaten Grass-types that have no trouble walling its Rock-type teammates.

Nihilego functions fills the role of a much-needed special sweeper that can threaten teams off the bat. While it faces some competition from Omaster, it doesn't need to set up (especially when using Power Herb), and has unique coverage with its two STAB moves.

How to Build a Monotype Team 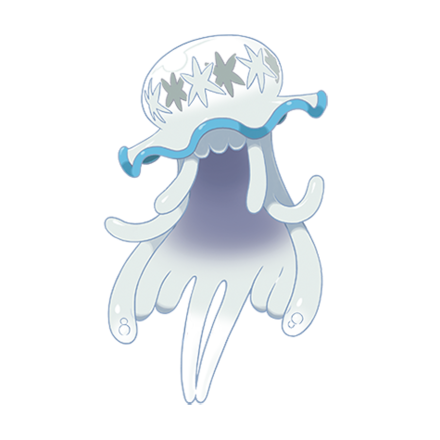 Counter it with Steel-types

Nihilego struggles to do much against Steel-types. Even non-defensive Steel-types can comfortably switch into Nihilego and threaten it with their STAB moves.

Post (0 Comments)
Opinions about an article or post go here.
Opinions about an article or post
We at Game8 thank you for your support.
In order for us to make the best articles possible, share your corrections, opinions, and thoughts about "Nihilego - Moveset & Best Build for Ranked Battle" with us!
When reporting a problem, please be as specific as possible in providing details such as what conditions the problem occurred under and what kind of effects it had.