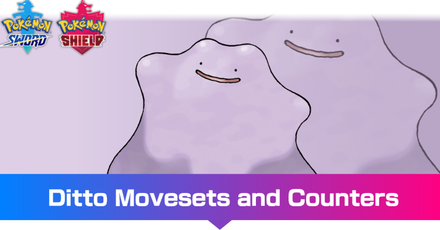 This is a strategy guide for using Ditto in competitive play for the games Pokemon Sword and Shield. Read on for tips on the best Nature, EV spreads, Movesets, and Held Items to use with Ditto, as well as its strengths and weak points. 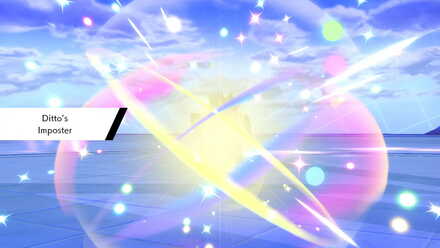 These values are from base stats with 0 Speed IVs, excluding external factors.

Ditto is a versatile Pokemon that is used as a clutch teammate, allowing you to copy an opposing sweeper and potentially turn the tide of the battle in your favor. As a result, it enjoys widespread usage in both offensive and defensive-oriented teams.

Transform is Ditto's only move, and is only available to use when facing against an opposing Ditto. Otherwise, Ditto will copy the opposing Pokemon's moves.

Ditto copies all of the Pokemon's base stats, EV spread, and IVs except HP, which is why Ditto needs full investment in HP.

The remaining 4 ATK and 252 Def EVs with a Relaxed Nature ensure that Ditto loses the speed tie with an opposing Ditto.

Imposter is Ditto's best Ability and immediately transforms it into the opposing Pokemon as soon as it switches in.

Note: Imposter cannot copy a Pokemon that's behind a Substitute or if it's disguised with its Illusion Ability.

A Choice Scarf is integral to Ditto's role as a clutch teammate, allowing it to outspeed the copied Pokemon and potentially knock it out before it can move.

Ditto cannot learn any other moves by leveling up, through breeding or tutoring, or by TM or TR.

How to Use Ditto Effectively

Ditto is arguably one of the best revenge killers in the current metagame due to its ability to instantly copy an opposing Pokemon and turn the tables on the opposing team.

As a result, it's often used in balanced and defensive teams as a way to copy an opposing team's main attacker.

Ditto is best used when copying a powerful attacker from an opposing team. With Series 8 now allowing the use of Legendary Pokemon, it's best to copy powerful setup sweepers such as Zacian, Xerneas, and Mewtwo.

How to Build a Team with Ditto

Due to how simple it is to use and its important role of turning the tables against the opposing Pokemon, Ditto can fit into any team - from Hyper Offense teams in need of a revenge killer or defensive teams that need a deterrent against setup sweepers.

Use it as an Anti-Legendary Revenge Killer

With Series 8 now allowing Legendary Pokemon in Ranked Battle, there's a greater need to safeguard teams with a Pokemon that can go toe-to-toe with these powerful Pokemon.

Ditto's Imposter Ability makes it the best anti-Legendary revenge killer, copying a Legendary Pokemon and turning the tables against the opposing team.

This balanced team relies on Ditto to turn the tables on the opposing team by copying a rampaging Legendary - preferably after it's set up.

Grimmsnarl is this team's lead, setting up Prankster-boosted Reflect and Light Screen to soften incoming blows.

Quagsire is this team's physically defensive pivot, and with its Unaware Ability, can switch into an opposing setup sweeper without getting knocked out by boosted attacks.

Ditto should come in when the opposing Pokemon is setting up with its boosting moves, preferably while Quagsire is recovering and phasing with Yawn, so that it can copy its boost, and eventually outspeed and knock it out afterwards.
How to Build a Defensive Team 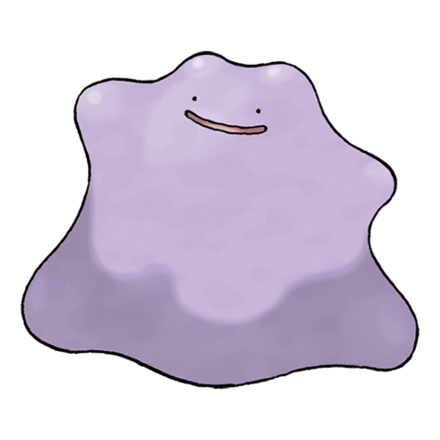 Use a Substitute to Nullify Imposter

Ditto's Imposter Ability fails when the opposing Pokemon is behind a Substitute. As a result, setup sweepers that can spare a move slot with Substitute have nothing to fear from Ditto.

Check it with Defensive Pokemon

Ditto's effectiveness revolves around copying a powerful attacker with its Imposter Ability, but this strategy fails when it manages to copy a defensive Pokemon instead.

Since Ditto doesn't copy a Pokemon's HP stat and is restricted to using a Choice Scarf, you can effectively stop it from messing up your team's momentum if you anticipate and switch into a Defensive Pokemon just as the opposing Ditto is about to switch in!

Since Ditto relies on Choice Scarf, it struggles against setup sweepers even if it manages to copy their immediate stats. These Pokemon are usually bulky and can simply set up with their moves to boost their offense or defenses even further while Ditto is locked into a weaker attacking move.

Outspeed it with Support Moves

Although Ditto usually attacks first due to its Choice Scarf, you can oustpeed it by using a support move that boosts your team's speed. Using this strategy leaves opposing Ditto in a difficult situation and will often result in it switching out!

In order for us to make the best articles possible, share your corrections, opinions, and thoughts about 「Ditto - Moveset & Best Build for Ranked Battle | Pokemon Sword and Shield」 with us!