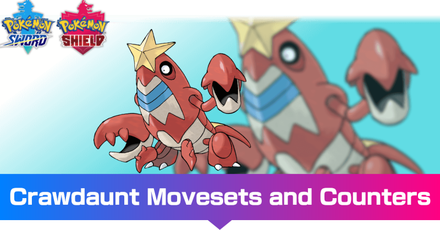 This is a strategy guide for using Crawdaunt in competitive play for the games Pokemon Sword and Shield. Read on for tips on the best Nature, EV spreads, Movesets, and Held Items to use with Crawdaunt, as well as its strengths and weak points. 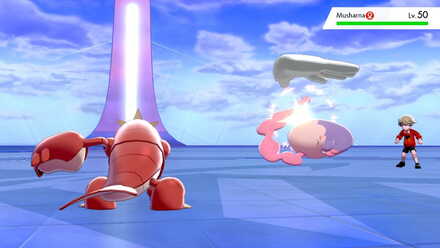 This build guarantees that you'll get at least one strong attack due to Focus Sash and Adaptability. Also, putting EVs in Speed should allow you to outspeed Pokemon like Rotom-Heat.

On top of that, the Focus Sash helps Crawdaunt survive attacks from faster Pokemon, which allows it to strike first with the priority move Aqua Jet on the next turn and deliver the finishing blow. 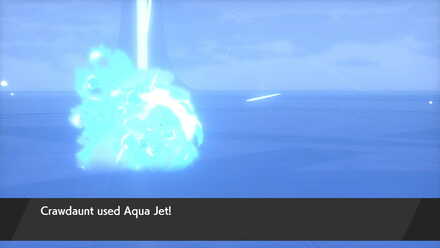 The Life Orb makes Crawdaunt's attacks much more powerful, to the point that it can defeat a non-Defense EV-trained Excadrill in one shot with Aqua Jet.

The EVs in Speed will also allow Crawdaunt to not only outspeed a Tyranitar but to also defeat one with 252 EVs in HP with Close Combat.

Crawdaunt can also outspeed Hydreigon with EVs and Nature maximized for Speed when paralysis is inflicted. However, note that you still might not outspeed a paralyzed Pokemon if it's holding a Choice Scarf.

How to Use Crawdaunt Effectively

Crawdaunt is also one of the few Pokemon that takes half damage from Water-type and Dark-type moves. 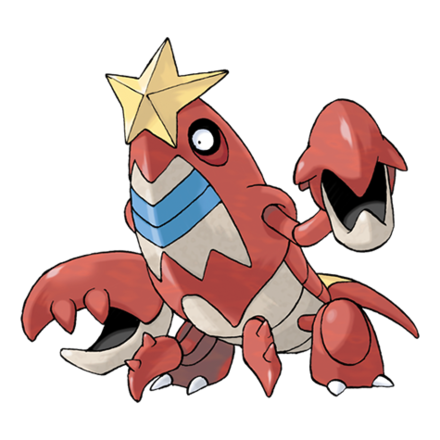 Take advantage of Crawdaunt's weaknesses by using Pokemon that are faster than it and that have good type compatibilty as these will be able to counterattack while taking damage from Crawdaunt.

Mimikyu in particular is a good counter against Crawdaunt as its Disguise ability allows it to resist an attack.

Pokemon with high defenses can beat Crawdaunt even with its powerful attacks. In particular, Pokemon that can resist Water-type moves can more easily defeat Crawdaunt.

In order for us to make the best articles possible, share your corrections, opinions, and thoughts about 「Crawdaunt - Moveset & Best Build for Ranked Battle | Pokemon Sword and Shield」 with us!