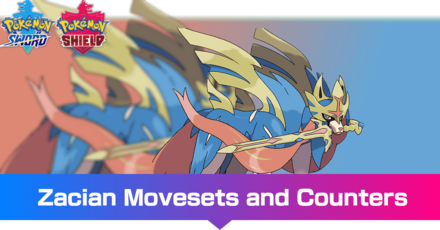 This is a strategy guide for using Zacian in competitive play for the games Pokemon Sword and Shield. Read on for tips on the best Nature, EV spreads, Movesets, and Held Items to use with Zacian, as well as its strengths and weak points. 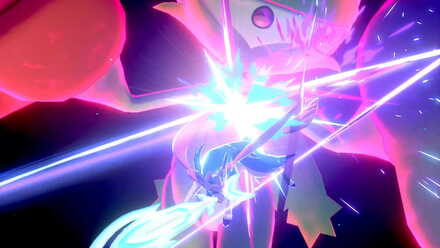 Zacian is one of the most powerful physical attackers in the game and is an oppresive force in competitive battle that pushed the metagame into its current state of hyper offense.

Iron Head is Zacian's main STAB move, and turns into Behemoth Blade when it transforms into its Crowned Sword form. The latter's base power doubles to 200 when used against Dynamax or Gigantamax Pokemon.

Swords Dance boosts Zacian's Attack by 2 stages, making it even more difficult to switch into. Its last move is Play Rough and is its secondary STAB move, and alows the Warrior Pokemon to take on and easily KO Dragon-types.

We're using a standard physical attacking set with full investment in Attack and Speed to ensure Zacian hits as hard and as fast as possible. The remaining 4 EVs are invested in Defense to boost its natural bulk.

Intrepid Sword is Zacian's only Ability, which boosts its Attack by 1 stage upon entering the battle.

Zacian's best held item is the Rusted Sword since this is what transforms it into its Crowned Sword form. This item also turns Iron Head into Behemoth Blade.

Zacian's great typing allows it to run a bulkier build while still having enough raw attack to threaten opposing teams. This bulky Zacian was used by Japanese competitive player Chihaya to reach first place in the current Ranked Battle Season.

This bulkier Zacian is great at surprising its usual checks and counters, and has the ability to survive powerful and staple moves in the current generation such as Choice Scarf Kyogre's Water Spout. As a result, it's a good choice for more balanced teams.

Iron Head is Zacian's main STAB move, and turns into Behemoth Blade when it transforms into its Crowned Sword form. The latter's base power doubles to 200 when used against Dynamax or Gigantamax Pokemon.

Psychic Fangs is both a coverage move and used for utility as it allows Zacian to break Light Screen, Reflect, and Aurora Veil.

Quick Attack is its last move and allows Zacian to hit faster and frailer attackers and is very useful against Focus Sash leads.

We're using a bulkier EV spread for this Zacian focusing more on survivability than straightforward attack. 252 HP, 20 Def, and 132 Sp.Def EVs make it as bulky as possible while 92 Atk and 12 Spd allow it to hit reasonably hard and as fast as possible.

Intrepid Sword is Zacian's only Ability, which boosts its Attack by 1 stage upon entering the battle.

Zacian's best held item is the Rusted Sword since this is what transforms it into its Crowned Sword form. This item also turns Iron Head into Behemoth Blade.

How to Use Zacian Effectively

Zacian is one of the most powerful physical attackers in the current metagame, with its Ability boosting its Attack by 1 stage simply by switching in.

A combination of great dual STAB, powerful moves, and excellent Attack and Speed make it an exceedingly powerful sweeper that's hard to check and even more difficult to counter - especially if it accumulates even more boosts!

This move makes Zacian one of the best Dynamax counters in the game, and is often used as an Anti-Dynamax Lead to instantly turn the tide of battle as soon as the match starts.

How to Build a Team with Zacian

Zacian is easy to fit into many teams whether on a Defensive or Offensive Team, providing great utility and offensive presence thanks to its ability to directly take on Dynamax Pokemon.

Use it as an Anti-Dynamax Lead

Zacian is best used as a lead to take on opposing Dynamax Leads, cutting them down with Behemoth Blade before they can boost their teammates stats with Max Moves.

Zacian is this team's anti-Dynamax Lead, overpowering opposing Dynamax Leads with its Behemoth Blade. It's best used as a set up sweeper, taking advantage of the switches by setting up with Swords Dance.

Heat Rotom serves as this team's offensive pivot, detering opposing Steel-types that Zacian has trouble with.

Latios fills the role of a special attacker, providing great neutral coverage with its STAB and coverage moves. It's also this team's Dynamax Pokemon, setting up Psychic Terrain with Max Mindstorm to prevent priority moves that can threaten its teammates.

Counter it with Ditto

One of the best ways to counter Zacian is by using a Ditto, with its Imposter Ability instantly transforming it into a direct copy of Zacian - right down to the stats and EV investment (minus the HP).

Outspeed it with Faster Pokemon

Few Pokemon are naturally faster than Zacian, but there are many Pokemon that can outrun the Warrior Pokemon with a Choice Scarf and KO it with their super effective moves.

Check it with a Fire-type Pokemon

Zacian lacks a strong coverage move to hand Fire-types and is often forced to switch out when it faces one. These Fire-types, in turn, can easily KO Zacian with their super effective attacks.

Ignore its Stat Boosts with Unaware

Pokemon with the Unaware Ability ignore Zacian's stat boosts, including the Intrepid Sword boost it gets at the start of the battle. This makes Zacian less of a threat and vulnerable to getting worn down or crippled by status effects.

Register as a member and get all the information you want. (It's free!)
Login
Opinions about an article or post go here.
Opinions about an article or post
We at Game8 thank you for your support.
In order for us to make the best articles possible, share your corrections, opinions, and thoughts about "Zacian - Moveset & Best Build for Ranked Battle" with us!
When reporting a problem, please be as specific as possible in providing details such as what conditions the problem occurred under and what kind of effects it had.