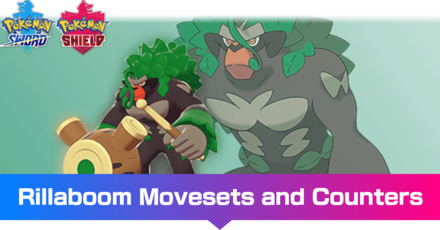 This is a strategy guide for using Rillaboom in competitive play for the games Pokemon Sword and Shield. Read on for tips on the best Nature, EV spreads, Movesets, Builds, and Held Items to use with Rillaboom, as well as its strengths and weak points.

How to Learn Rillaboom's Egg Moves 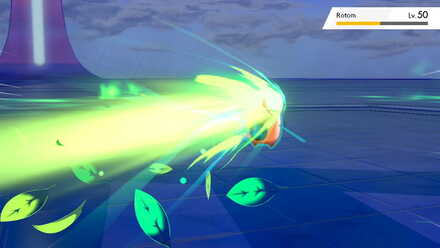 This set focuses on taking advantage of Rillaboom's high Defense and Speed, while escaping from difficult matchups with U-turn. Even if the opponents outspeeds Rillaboom, it can use Drum Beating to decrease its opponent's Speed and gain the upper hand.

With its Hidden Ability Grassy Surge, Rillaboom will automatically set up Grassy Terrain to power up all Grass-type moves to 1.3x power. This allows it to take out Wash Rotom with 252 EVs placed in HP with a single Drum Beating, and handle a variety of opponents that it could not have before with its newfound power boost.

How to Get Grassy Surge Rillaboom

A free Grookey with the Grassy Surge Ability is available via Pokemon HOME. Learn how to get all three Galar Starters with Hidden Abilities and transfer them to Pokemon Sword and Shield with our guide below:
How to Get & Transfer Hidden Ability Starters from Pokemon HOME 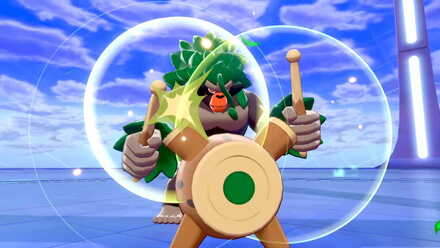 This build is a better for handling opponents like Primarina, Excadrill and Wash Rotom. These Pokemon rarely have an attack which can hit Rillaboom effectively, so use Drum Beating on whatever switches and Grassy Glide on Pokemon that can outspeed you.

Its EVs are placed here to allow it to outspeed a Mimikyu with its Speed decreased by one stage, so it can take the upper hand when Mimikyu comes out on a switch-in. When Mimikyu hasn't used Swords Dance yet, Rillaboom can handle its hits with no problem, and it can beat back to net a KO.

How to Use Rillaboom Effectively

An attacker who combines Attack and Defense

Rillaboom is able to hit hard with its high Attack. It also has high Speed, so arming it with a Choice Scarf can allow it to take advantage of this to move faster and defeat many opponents.

Must watch out for its many weaknesses

As a Grass-type Pokemon, Rillaboom is cursed with weaknesses to Fire, Flying and others which are frequently held even by non-STAB opponents. Don't send it up against opponents who it can't handle.

Take advantage of its weaknesses

As Rillaboom is a Grass-type Pokemon, a type with several weaknesses, and since it can only learn Moves of a few types, it's easy to exploit these weaknesses with an advantageously-typed Pokemon.

>>1 You’re telling me. I’m all in for powerhouses, but rejecting Brick Break is abysmal from my understanding.

Hi why do you choose superpower instead of brick break. Cause superpower decreases attack and defense. And brick break allows you to hit through screens Just doesn't make sense.

Register as a member and get all the information you want. (It's free!)
Login
Opinions about an article or post go here.
Opinions about an article or post
We at Game8 thank you for your support.
In order for us to make the best articles possible, share your corrections, opinions, and thoughts about "Rillaboom - Moveset & Best Build for Ranked Battle | Grassy Surge Hidden Ability Moveset" with us!
When reporting a problem, please be as specific as possible in providing details such as what conditions the problem occurred under and what kind of effects it had.