How to Get Mew | Pokemon Sword and Shield 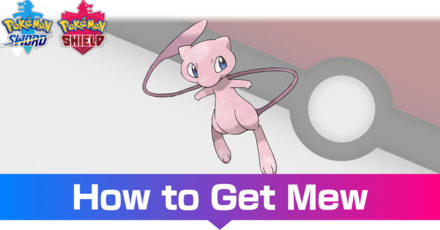 This is a page on the Pokemon Mew, including its learnable moves and where it can be found in Pokemon Sword and Shield. Read on for information on its evolutions, abilities, type advantages, and location.

Base Stats of Mew

How to Get Mew

Mew in Pokemon Sword and Shield will be only available to those who have the Poke Ball Plus which was released last year.

What is a Poke Ball Plus?

Poke Ball Plus is basically a controller, similar to a Poke Ball in appearance.

The controller was released at the same year along with the Pokemon game, Pokemon: Let's Go Pikachu and Let's Go Eevee. You may still buy it online or at store.

Do note that one Poke Ball Plus only contains one Mew. In other words, you can only obtain Mew from a brand new Poke Ball Plus you have bought, or one from which Mew has not be redeemed in any other Pokemon game.

When the Pokemon Home paid service is released in 2020, players will most likely be able to transfer Mew from other Pokemon games. So if you redeemed your Mew in Let's Go, Pikachu! or Let's Go, Eevee!, you should be able to transfer it to Pokemon Sword and Shield using Pokemon Home. However, at the present time, there is still no way to transfer a Mew to or from previous Pokemon games. Be careful before redeeming your Poke Ball Plus when deciding which game you want to have Mew in.

Get Mew via Mystery Gift Option

If you already have the necessary item, proceed and check the guideline below to obtain Mew.

You can't Reset for a better Mew

A Mew obtained from the Poke Ball Plus is one of a kind. There's currently no known method available to reset your game to try again for a Mew with a better Nature or IVs. However, players can make up for these by improving IVs with Bottle Caps and changing Mew's Nature with Mints.

Mew in Other Pokemon Games

In order for us to make the best articles possible, share your corrections, opinions, and thoughts about 「How to Get Mew | Pokemon Sword and Shield」 with us!