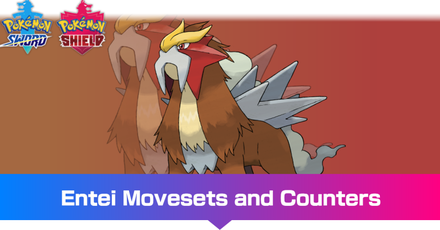 This is a strategy guide for using Entei in competitive play for the games Pokemon Sword and Shield. Read on for tips on the best Nature, EV spreads, Movesets, and Held Items to use with Entei, as well as its strengths and weak points. 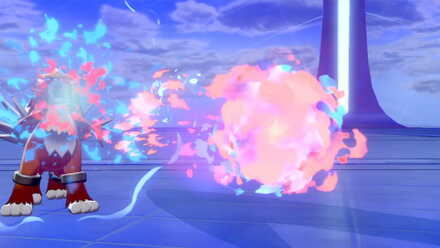 Although it faces some competition with other Choice Band users, Entei has a niche as a sweeper that threatens opposing physical sweepers thanks Sacred Fire.

Sacred Fire is Entei's main STAB move, and has a 50% to burn the target. This allows Entei to check and threaten opposing physical sweepers as they risk getting burned and getting their Attack cut in half if they stay in battle with the Volcano Pokemon.

Extreme Speed is its other main attacking move and, thanks to its +2 priority, allows Entei to attack and potentially KO faster but frailer sweepers like Cinderace and Mienshao.

We're using a straigthforward physical attacking EV spread with full investment in Attack and Speed so that Entei hits as hard and as fast as possible. The remaining EVs are placed in Defense to further boost its natural bulk, and works well with Sacred Fire's high burn rate.

Inner Focus is the recommended Ability for this Entei. Apart from giving it immunity to flinching attacks, Inner Focus also blocks Intimidate.

Choice Band boosts Entei's attack by 50%, but restricts it to using only the initial move it used for that turn. 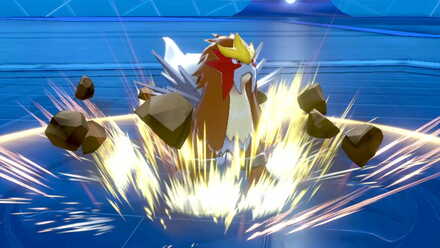 Entei is also an effective Assault Vest user thanks to its great HP stat and respectable bulk.

Sacred Fire is Entei's main STAB move, and has a 50% to burn the target. Stone Edge is its secondary attack, and gives great neutral coverage - especially against opposing Fire-types.

Stomping Tantrum is its secondary coverage move. This move becomes a 150 Base Power Ground-type move if Entei's previous move misses or is blocked by the opposing Pokemon's Ability. Both Sacred Fire and Stone Edge have a chance to miss, meaning Entei can potentially deal out powerful Stomping Tantrums against the opposing team.

Extreme Speed is its last attacking move and, thanks to its +2 priority, allows Entei to attack and potentially KO faster but frailer sweepers.

We're using a modified physical attacking EV spread for this build. While we're still giving Entei full EV investment in Attack, we're also giving it split 52 EVs between Defense and Special Defense, as well as 132 HP EVs to give it some bulk. The remaining 20 EVs are invested in Speed to slightly boost its respectable speed stat.

Inner Focus is the recommended Ability for this Entei. Apart from giving it immunity to flinching attacks, Inner Focus also blocks Intimidate.

This build relies on Assault Vest. This item boosts Entei's Special Defense by 50%, but it can't use any status moves.

How to Use Entei Effectively

Entei separates itself from other Choice Band sweepers with its ability to spread the Burn status with its Sacred Fire attack. While other Choice Band users will switch against a Check, Entei can risk staying in battle and potentially inflicting a Burn.

The Assault Vest build is especially good at threatening its usual checks, as it can potentially withstand a super effective attack and burn the opposing Pokemon with Sacred Fire.

How to Build a Team with Entei

Entei needs to compete with stronger and faster Choice Band users for a slot in most Singles teams, but it has a niche in Doubles as a lead status spreader.

Lead with Entei in Doubles

Immunity to flincing and Intimidate courtesy of Inner Focus allows Entei to function as a good offensive lead in Doubles. It's Sacred Fire move, with its 50% to inflict a burn, allows it to threaten Hyper Offense teams. A lucky burn from Sacred Fire can turn the tide of battle to your favor, especially if you manage to land it on an opposing setup sweeper! 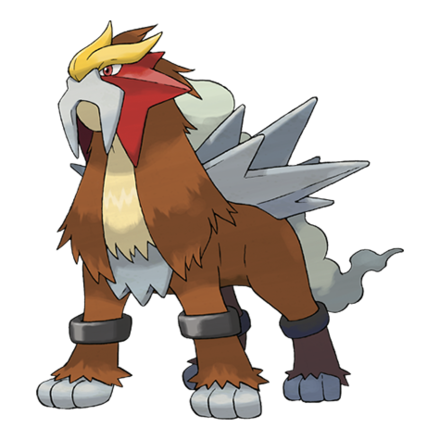 Check it With a Guts Pokemon

Entei's threat is mostly from the 50% burn rate from Sacred Fire, but there are Pokemon that actually benefit from this status effect. These Pokemon can freely switch into Entei and even KO it if it decides to stay.

Counter it With a Defensive Water-Type

Entei can't do much against Bulky Waters due to its lack of coverage. Many defensive Water-types can freely switch into Entei, not caring about burns, and force it to switch out with their Water-type moves.

In order for us to make the best articles possible, share your corrections, opinions, and thoughts about 「Entei - Movesets & Best Build for Ranked Battle | Pokemon Sword and Shield」 with us!