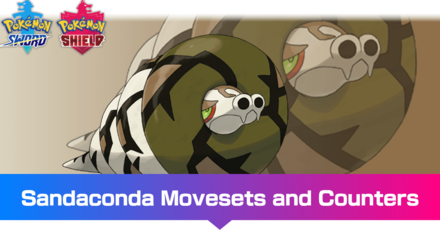 This is a strategy guide for using Sandaconda in competitive play for the games Pokemon Sword and Shield. Read on for tips on the best Nature, EV spreads, Movesets, and Held Items to use with Sandaconda, as well as its strengths and weak points.

This build allows Sandaconda to fill the role of lead support with the goal of creating an advantageous starting point for the rest of the team with its support moves.

Sandaconda's moves are intended to create as much disadvantage as possible to your opponent's team.

Glare is its primary support move that you should use at the very start of the battle except when you are facing an Electric-type lead.

Rock Tomb is used to lower an opponent's Speed stat even more, and is useful if you think that the foe can still outspeed your main attacker. Mud-Slap on the other hand lowers accuracy which is very effective against Pokemon that rely on high power, low accuracy moves such as Blizzard or Hydro Cannon.

Stealth Rock can be used when you're in favorable conditions to deal residual damage in case your opponent switches Pokemon.

This build uses a straightforward EV spread with full investment in Attack and Speed so that it hits hard and as fast as possible, with the remaining 4 HP to give it some bulk.

Sandaconda's signature Ability Sand Spit lets it whip up a Sandstorm for five turns when it is hit by a damaging move.

Letting Sandaconda hold Focus Sash ensures that it can use Glare or set up Stealth Rock before it gets knocked out.

How to Use Sandaconda Effectively

An Excellent Lead against Fast Attackers

Sandaconda has access to Glare, Mud-Slap, Rock Tomb, and other stat-decreasing moves which are good moves to use against speedy, offensive Pokemon.

Letting it hold Focus Sash also guarantees that you can use at least one move to lower your opponent's stat before Sandaconda is knocked out.

How to Build a Team with Sandaconda

This team mostly relies on Glalie's Moody Ability. The majority of Glalie's stat changes may be out of your control, but you can definitely help it by afflicting disadvantages at your opponents with Sandaconda.

The following team shows an example of how Sandaconda can be effectively used in a party for Ranked Battle.

Sandaconda leads the team and uses Glare to slow down your opponent. This is followed by either Mud-Slap to lower their accuracy or Rock Tomb to lower their Speed even more. This allows Glalie to have more breathing room with its random stat changes thanks to its Ability.

Sandaconda's Stealth Rock softens up any opposing Pokemon that Glalie or Mimikyu may face. As these two are built offensively, it will be easier to clean up the opposing team, especially with Mimikyu who may not be able to hit as hard as Glalie. 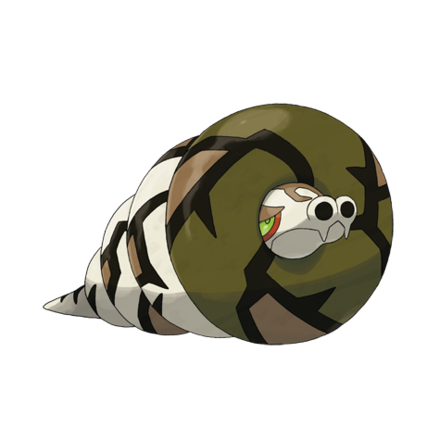 Sandaconda has a low Special Defense stat, which makes it very vulnerable to powerful Water and Grass-type moves as long as they can outspeed it.

Post (0 Comments)
Opinions about an article or post go here.
Opinions about an article or post
We at Game8 thank you for your support.
In order for us to make the best articles possible, share your corrections, opinions, and thoughts about "Sandaconda - Moveset & Best Build for Ranked Battle" with us!
When reporting a problem, please be as specific as possible in providing details such as what conditions the problem occurred under and what kind of effects it had.