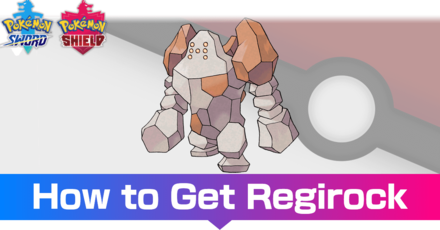 This is a page on the Pokemon Regirock, including its learnable moves and where it can be found in Pokemon Sword and Shield. Read on for information on its evolutions, abilities, type advantages, and location.

Base Stats of Regirock

How to Get Regirock

Regirock can be encountered as part of the Legendary Titans storyline in The Crown Tundra DLC.

Where to Find Rock Peak Ruins

To reach the location of the Rock Peak Ruins, you'll need to get to the entrance of Giant's Foot – you'll find the Ruins directly to the right. To get there, you'll need to start descending down the hill in Giant's Bed, so look for the slope down to reach the right side of the map.

How to Open Rock Peak Ruins

Post (0 Comments)
Opinions about an article or post go here.
Opinions about an article or post
We at Game8 thank you for your support.
In order for us to make the best articles possible, share your corrections, opinions, and thoughts about "Regirock - Evolutions, Location, and Learnset" with us!
When reporting a problem, please be as specific as possible in providing details such as what conditions the problem occurred under and what kind of effects it had.