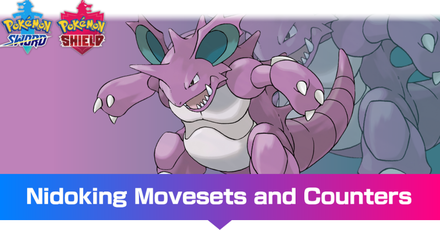 This is a strategy guide for using Nidoking in competitive play for the games Pokemon Sword and Shield. Read on for tips on the best Nature, EV spreads, Movesets, and Held Items to use with Nidoking, as well as its strengths and weak points. 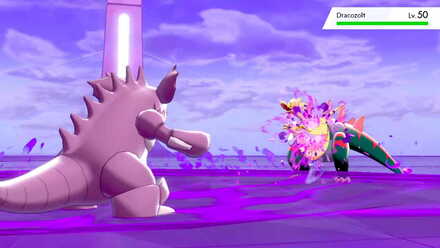 Despite its immediate stats will tell you, Nidoking works best as a special sweeper thanks to its plethora of special moves that get a boost from its Sheer Force ability.

Sludge Wave is Nidoking's strongest STAB move, hitting Fairy-types and Grass-types hard and even potentially KOing them. Earth Power is its secondary STAB move, and provides great coverage alongside its other STAB move.

Nidoking's remaining two moves are Thunderbolt and Ice Beam, giving it the fabled "BoltBeam" coverage. This allows Nidoking to hit a variety of different Pokemon for super effective damage!

We're using a basic special attacking EV spread with full investment in Speed and Special Attack. The remaining EVs are placed in Special Defense to round off its bulk.

Note: Sheer Force doesn't work when the Pokemon is in a Gigantamax state.

We're giving Nidoking Life Orb for this build. This item boosts the power of Nidoking's attacks by 30% at the cost of some recoil damage.

How to Use Nidoking Effectively

Make the Most Out of its Coverage

Nidoking's advantage over other special sweepers is its unmatched coverage thanks to its wide special movepool. It's main STAB moves alone hit the very common Fairy, Grass, Steel, and Fire-types that dominate the metagame, while its BoltBeam coverage give it great neutral coverage.

As a result, Nidoking is played not as a straigtforward wallbreaker but as a check that can threaten certain Pokemon and force switches.

How to Build a Team with Nidoking

Nidoking faces stiff competition from stronger special sweepers, but its unmatched coverage alone is enough to give it a spot in most teams - especially Monotype Teams that are in need of good coverage.

A Monotype Sweeper with Excellent Coverage

Nidoking excels in Monotype teams where it provides valuable team support thanks to its impressive coverage. Since Nidoking is a dual-type Poison/Ground Pokemon, it can fit in either Monotype Poison or Monotype Ground teams! 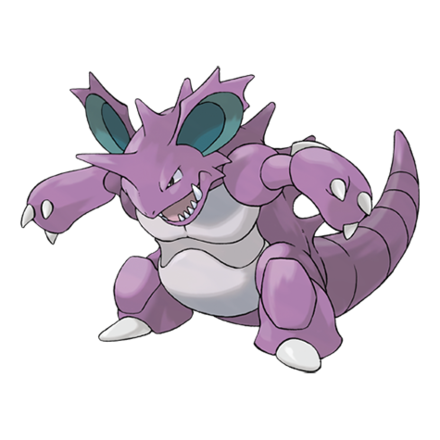 Outspeed and KO with a Faster Sweeper

Despite its great move coverage, Nidoking has one glaring weakness: it's rather lackluster speed for a sweeper. Even with full investment, it is still outsped by faster sweepers in the Metagame and some can outright KO Nidoking if given the chance!

In order for us to make the best articles possible, share your corrections, opinions, and thoughts about 「Nidoking - Moveset & Best Build for Ranked Battle | Pokemon Sword and Shield」 with us!