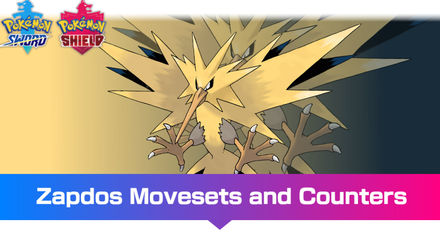 This is a strategy guide for using Zapdos in competitive play for the games Pokemon Sword and Shield. Read on for tips on the best Nature, EV spreads, Movesets, and Held Items to use with Zapdos, as well as its strengths and weak points.

With its potential to use Max Airstream with STAB, it can deal high damage while simultaneously setting up. Its Flying typing unfortunately deprives it of the boost from Electric Terrain, but after its Dynamax has ended, it can use Rising Voltage to deal damage essentially equivalent to Max Lightning.

As Zapdos can get STAB on both Electric and Flying moves, and possesses Fire moves as well, it's difficult to wall it effectively, making Zapdos effective even when compared to other Dynamax sweepers.

Zapdos' flagship defensive set makes a return in Sword & Shield. A combination of good dual typing granting only 2 weaknesses in Ice and Rock, excellent support moves, and great abilities make it an excellent check to Fighting-type Pokemon and physical sweepers in general.

Its powerful Ability Static allows it to switch into moves like Rapid-Strike Urshifu's Surging Strikes and Landorus-Therian's U-Turn and inflict Paralysis on the user.

How to Use Zapdos Effectively

A Great Check to Physical Sweepers

Zapdos is best used as a defensive Pokemon that can easily wall physical sweepers - especially Fighting-types that rely on contact moves. Due to its role as a paralysis spreader, Zapdos is a great answer to Hyper Offense teams that rely on speed.

A Powerful Sweeper in Rain

Although it's best known as a defensive Pokemon, Zapdos can also function as a powerful sweeper in rain thanks to Thunder and Hurricane. The fact that it has Volt Switch means it can pivot in and out of battle with ease - a feat that other rain sweepers can't do.

How to Build a Team with Zapdos

Despite its great defensive prowess, Zapdos faces stiff competition from other defensive Pokemon such as Toxapex and Ferrothorn. To differentiate it from the plethora of defensive Pokemon, it's best used in a team that needs active speed control through paralysis.

Zapdos threatens Hyper Offense teams as they risk getting paralyzed by either Discharge or Static. As a result, this Legendary Bird is a popular choice for defensive teams that need a paralysis spreader as part of their defensive core.

Despite its defensive prowess, Zapdos can be whittled down by using Rock-type and Ice-type moves against it.

Register as a member and get all the information you want. (It's free!)
Login
Opinions about an article or post go here.
Opinions about an article or post
We at Game8 thank you for your support.
In order for us to make the best articles possible, share your corrections, opinions, and thoughts about "Zapdos - Moveset & Best Build for Ranked Battle" with us!
When reporting a problem, please be as specific as possible in providing details such as what conditions the problem occurred under and what kind of effects it had.