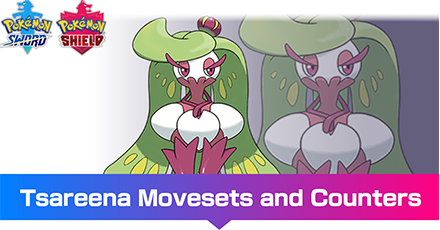 This is a strategy guide for using Tsareena in competitive play for the games Pokemon Sword and Shield. Read on for tips on the best Nature, EV spreads, Movesets, and Held Items to use with Tsareena, as well as its strengths and weak points. 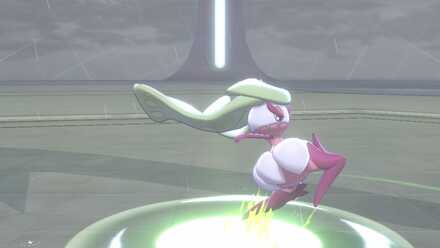 Tsareena's high Attack stat makes it a valuable attacker. It is very uncommon for a Grass-type to have Ice and Fighting-type coverage, both of which Tsareena has. Its high Attack stat coupled with its move coverage options make it a great attacker for your team.

Power Whip is Tsareena's strongest STAB move which must always be run despite its chance of missing. The same can be said about High Jump Kick and Triple Axel, all of which benefit from the Accuracy boost from Wide Lens.

Triple Axel is great for knocking out Dragon-types like Dragapult, even being able to deal massive damage to Dragonite through Multiscale's resistance.

Rapid Spin is great for removing Hazards that may give Tsareena's teammates difficulty switching in. As such, Pokemon like Charizard enjoy the Rapid Spin assist from Tsareena.

We should maximize Tsareena's Attack stat so that it can deal as much damage as it can. Maximizing its Speed stat lets us consistently outspeed Tyranitar (with no Choice Scarf), Butterfree, and Rotom Formes that are uninvested in Speed.

Queenly Majesty is as useful in Singles as it is in Doubles because of the immunity that it grants Tsareena from Priority Moves. This means that Pokemon with Prankster are ineffectual on Tsareena, but they can still use moves that do not affect Tsareena directly. It is also immune to super-effective Ice Shard or a super-effective Flying-type attack from a Gale Wings Talonflame. 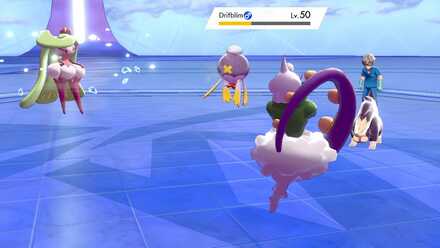 Tsareena's impressive attack stat and coverage options allow it to be an incredible Attacker if positioned correctly. Tsareena appreciates a team that synergizes with it, and a team where it can offer its Ability and coverage effectively.

Alternatively, High Jump Kick can be replaced with Bounce if your team really needs Flying-type coverage. Otherwise, High Jump Kick is good to keep in Tsareena's moveset because it allows Tsareena to deal huge neutral damage on most Pokemon.

A more offensive spread is recommended for Tsareena in doubles with more focus on its Attack and an Adamant Nature. Tailwind lets Tsareena attack sooner than it usually would, and its Adamant Nature and maximum Attack EVs lets it attack as hard as possible.

Queenly Majesty is a valuable asset to have for your team, especially in Double Battles where Fake Out is used more rampantly.

Wide Lens ensures that our low accuracy moves get to connect more consistently. It also ensures that all three hits of Triple Axel all hit for maximum damage and efficiency.

How to Use Tsareena Effectively

Using Tsareena as a switch in to a Fake Out is often a good idea. It is good to have Tsareena in the back of your team while its teammates take care of Pokemon that can resist it.

How to Build a Team with Tsareena

Tsareena is more than just a substitute for Rillaboom. While it does not have access to Fake Out itself, it gives its partner and itself immunity to it with Queenly Majesty. It also has access to a valuable move in Triple Axel, which it can use to threaten opposing Grass-types and other Ice-weak Pokemon. Tsareena offers coverage with its wide variety of moves and a pseudo-Psychic Surge with its Ability that grants it immunity from Priority Moves.

Consider what Tsareena can offer your team and if your team needs its coverage and Queenly Majesty support, otherwise Rillaboom's consistency may be a better fit.

Physical Attacker in a Rain Team

Tsareena fits perfectly in a Rain Team where it enjoys a damage reduction to its Fire-type weakness. Its middling speed stat is also helped by Tailwind support. Screens support is also appreciated in the form of Light Screen and Reflect. These are all great ways to aid Tsareena which can help it be effective in matches.

Tsareena is able to support its teammates with its Queenly Majesty Ability, protecting itself and a partnered Prankster Pokemon like Tornadus from Fake Outs. Tornadus can cleanly set up Tailwind for its team. While in Tailwind, Kyogre can dish out powerful Water Spouts. Rillaboom is a check against Kyogre, and Tsareena can handily take care of Rillaboom with a fast Triple Axel in Tailwind as well as making Kyogre immune to Grassy Glide.

Tsareena is also able to threaten opposing Groudon and Kyogre with a powerful Power Whip. 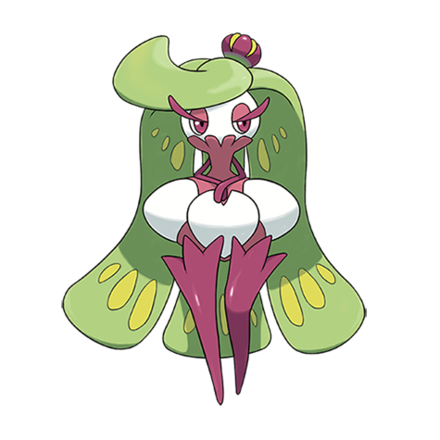 While Tsareena has a great Attack stat, its defenses and speed are not spectacular at all. Tsareena can easily get KO'd with a Fire-type move outside of Rain.

In order for us to make the best articles possible, share your corrections, opinions, and thoughts about 「Tsareena - Moveset & Best Build for Ranked Battle | Pokemon Sword and Shield」 with us!