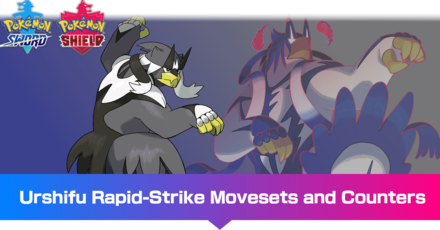 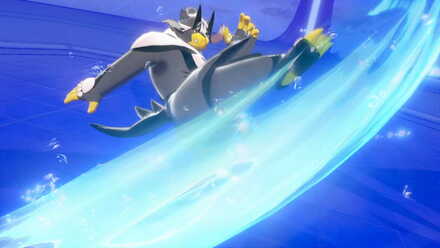 This build seeks to enhance Urshifu's already incredibly high base attack of 130 even more by giving it a Choice Band. With a whopping 7 resistances and a large pool of moves to choose from, Urshifu makes for a great counter to many Pokemon in the meta.

To take full advantage of Unseen Fist, all of Urshifu's moves should ideally be contact moves. Surging Strikes and Close Combat will be your main STAB moves that deal tremendous amounts of damage.

Thunder Punch will be a coverage move against bulky water types and Aqua Jet can be a useful priority move to finish off low-health enemies.

This set utilizes a standard physical attacking spread with maximum investment in Attack and Speed. The remaining EVs can be placed in Defense.

Unseen Fist allows Urshifu to make sure that contact moves will always hit, even when the opponent uses Protect.

Focus Sash allows Urshifu to survive a killing blow at 1 HP, provided that it was at full HP.

This build allows Urshifu to take hits while Dynamaxed, get an attack boost when hit by its weaknesses, and increase its speed with Max Airstream. With 5 type-weaknesses, outfitting it with a Weakness Policy has a high chance of activating and its high durability helps protect it from being KO'd by move it's weak to.

To take full advantage of Unseen Fist, all of Urshifu's moves should ideally be contact moves. Surging Strikes and Close Combat will be your main STAB moves that deal tremendous amounts of damage.

Thunder Punch will be a coverage move against bulky water types and
Acrobatics deals increased damage once Weakness Policy has been consumed.

This build uses a modified distribution of the standard physical attacking set. Since we expect Urshifu to receive some damage, we will want a bit more bulk on it. We leave just enough speed to make sure that one use of Max Airstream will boost its speed just enough to surpass the incredibly fast Cinderace as well as many others.

We're relying on a Weakness Policy to turn Urshifu's weakness into a boon. When hit by a super effective move, the Weakness Policy will be consumed and give Urshifu boosts to its offensive stats. Once consumed, it also ups the power of Acrobatics.

Urshifu Rapid-Strike Style is a great option for lead Dynamax user in Doubles thanks to its great dual Water/Fighting STAB, as well as the offensive utility of its moves.

Surging Strikes is Urshifu's main STAB move and is a multi-hit move that always hit three times, with each individual hit always dealing a critical hit.

This makes Urshifu a great anti-lead Pokemon since it easily breaks the Substitute, Sturdy, or Focus Sash of opposing sweepers, and also allows it to directly take on Landorus (Therian Forme) since critical hits bypass Attack drops from Intimidate.

It's last move is Aerial Ace which allows Urshifu to take on Grass-types and opposing Fighting-types. This move also becomes Max Airstream during Dynamax, allowing Urshifu to boost it and its partner's Speed by 1 stage.

This set utilizes a standard physically offensive spread with maximum investment in Attack and Speed, with the remaining 4 EVs placed in HP to give it some bulk.

Unseen Fist is Urshifu's only Ability and allows it to bypass protection moves such as Protect and Detect, as well as the held item Protective Pads.

Urshifu has two options for held items. Focus Sash allows Urshifu to survive a killing blow at 1 HP, provided that it was at full HP.

Life Orb, on the other hand, boosts the power of its moves at the cost of some residual damage.

How to Use Urshifu Rapid-Strike Style Effectively

Is Faster Than Mimikyu

Urshifu's speed stat is a single point higher than the often used Mimikyu, and when given a Choice Band, can one shot Mimikyu with Surging Strikes that can break through Mimikyu's Disguise.

When Gigantamaxed, Urshifu gains access to G-Max Rapid Flow which ignores moves like Max Guard or Protect and hits its target directly, which is incredibly useful.

How to Build a Team with Urshifu Rapid-Strike Style

Physical Attacker in an Offensive Team

This core relies on dealing a lot of damage while also protecting its sweepers. Lapras' access to G-Max Resonance can provide unparalleled utility for the team.

Access to Freeze-Dry also allows Lapras to take care of Fairy-type threats like Primarina or Tapu Fini. On the other hand, its Water-type moves can take care of Fire-types that Mimikyu may have trouble with.

The support Mimikyu will receive from Aurora Veil should help with its survivability and lets it fill the role of a secondary Physical Attacker for the team.

Urshifu Rapid-Strike can easily cover the Steel-type weaknesses of its teammates, while blowing away most other threats with its guaranteed Critical Hits.

Lead Attacker in a Doubles Team

Urshifu's main role is to Gigantamax and deal as much damage as possible with its moves, while also providing utility with Max Airstream. Indeedee functions as both lead, setting up Psychic Terrain to block priority moves such as Grassy Glide and redirecting attacks with Follow Me.

Lunala is the team's backup sweeper and benefits from Indeedee's Psychic Terrain to power up its Expanding Force. Clefairy fills the role of both backup support and cleric, boosting its partner's bulky with its Friend Guard Ability while healing it with Life Dew. 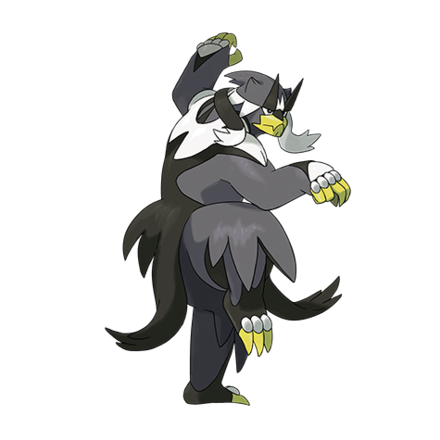 Counter With Pokemon With Good Resistances

Urshifu's Water/Fighting typing is actually quite easy to resist. It's likely that Urshifu with a water and fighting type move, a non-STAB move, and Aerial Ace will become fairly common in the meta so as long as you can resist the STAB moves Urshifu uses, you should be able to take it down.

As Urshifu's signature move, Surging Strikes, hits its target 3 times and makes contact, abilities like Iron Barbs or held items like the Rocky Helmet can help to cripple it. Even with Pokemon that have no type advantages against Urshifu, with the right timing, you can switch Pokemon in with either of these to take it down.

Post (0 Comments)
Opinions about an article or post go here.
Opinions about an article or post
We at Game8 thank you for your support.
In order for us to make the best articles possible, share your corrections, opinions, and thoughts about "Urshifu Rapid-Strike Style - Moveset & Best Build for Ranked Battle" with us!
When reporting a problem, please be as specific as possible in providing details such as what conditions the problem occurred under and what kind of effects it had.