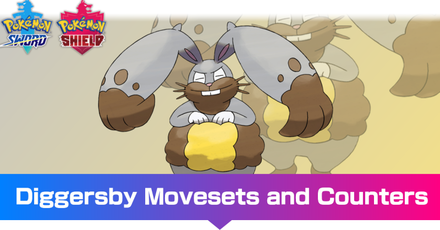 This is a strategy guide for using Diggersby in competitive play for the games Pokemon Sword and Shield. Read on for tips on the best Nature, EV spreads, Movesets, and Held Items to use with Diggersby, as well as its strengths and weak points.

Diggersby is easily one of the most underrated sweepers in the metagame. It's unimposing appearance masks the fact that it's an effective set-up sweepers that can decimate teams that underestimate it.

Swords Dance boosts Diggersby's attack to respectable levels, allowing it to punch holes into walls and even outright KO other Pokemon with its two STAB moves - Earthquake and Body Slam, with latter having great utility with its 30% paralysis chance.

Quick Attack is its last move, patching up Diggersby's rather mediocre speed stat and allowing it to threaten faster sweepers. With one Swords Dance, Diggersby can easily KO Alakazam even at full health!

We're using a straighforward EV spread with full investment on Attack and Speed to ensure Diggersby hits hard and manages to outrun slower walls and support Pokemon. The remaining 4 EVs go to Special Defense to round up its bulk.

Huge Power is Diggersby's best ability and should always be the one used competitively. This ability doubles Diggersby's attack, allowing it to hit hard despite its rather low base attack stat.

At level 50 with the given EV spreads, Diggersby has an effective attack stat of 236!

We're giving Diggersby Life Orb to further boost the power of its moves. Few Pokemon can switch into Diggersby once it's accumulated enough boosts and is holding a Life Orb!

How to Use Diggersby Effectively

Get a Swords Dance Up ASAP!

What makes Diggersby so formidable is the stat boosts it gets from Swords Dance, so make sure you get at least one up as soon as possible! Once you're facing a Pokemon that can't do anything to Diggersby, switch it in and set up a Swords Dance!

Diggersby is an excellent late-game sweeper and can easily turn the tide of the battle after its checks and counters are take care of by its teammates!

How to Build a Team with Diggersby

Diggersby faces stiff competition from other late-game and set-up sweepers, but its unique dual-typing and coveted ability allow it to fit into many teams!

Diggersby is an excellent candidate for late-game sweeper in offensive-oriented teams. The fact that it has an immunity to Electric-type moves make it a great teammate as it can absorb Thunder Wave - a move that can easily stop the momentum of hyper offense sweepers.

Check out our guide below to learn how to use Diggersby in an Offensive team.

Use an Unaware Defensive Wall

As with all set-up sweepers, Diggersby is easily countered by walls that have the ability Unaware. Although this ability doesn't ignore Huge Power, it does ignore Diggersby's Swords Dance attempts!

Register as a member and get all the information you want. (It's free!)
Login
Opinions about an article or post go here.
Opinions about an article or post
We at Game8 thank you for your support.
In order for us to make the best articles possible, share your corrections, opinions, and thoughts about "Diggersby - Moveset & Best Build for Ranked Battle" with us!
When reporting a problem, please be as specific as possible in providing details such as what conditions the problem occurred under and what kind of effects it had.