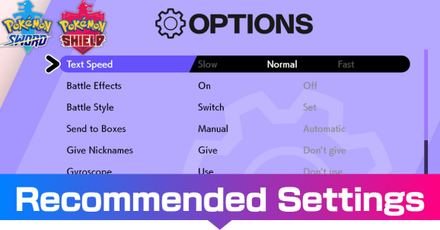 In-game settings lets you customize how quickly or slowly you progress Pokemon Sword and Shield, Isle of Armor, and the Crown Tundra DLC. Learn the best settings for both fast and casual gameplay.

Turning off Battle Effects and Skipping Movies let's you quickly progress through battles and important plot points in the game, letting you finish the game at record time!

These settings are best for players looking to enjoy the game's story at a steady pace and immerse themselves with story elements, such as giving each Pokemon they catch nicknames and experiencing the battle animations!

This setting toggles whether you want to give a newly caught Pokemon a nickname.

This setting toggles whether the game autosaves or requires manual saving. Generally, it's best to turn off the autosave as there are several points of no return in the game, such as when challenging a Gym or the Elite Four.

It's also best to turn off Autosave if you plan to soft reset certain special Pokemon for the right natures and effort values, such as Starters and Legendary Pokemon.

Enabling Casual Controls lets players easily play the game with one hand, with both left and right sticks allowing you to move the character.

Keep in mind that enabling casual controls also disables the D-Pad and also prevents you from rotating the camera in specific areas such as the Wild Area.

This toggles whether you want to see the nicknames other players gave their Pokemon when camping or battling with them. This setting has no impact on gameplay speed or efficiency.

Adjust Volume with the Hi-tech Earbuds

Volume Settngs are not immediately available at the start of the game. To toggle Background Music, Sound Effects, and Pokemon Cries, you need to get the Hi-tech Earbuds from Motostoke City to add the functions to the Options Menu.

Hi-tech Earbuds Effect and How to Get It

In order for us to make the best articles possible, share your corrections, opinions, and thoughts about 「Recommended Settings | Pokemon Sword and Shield」 with us!