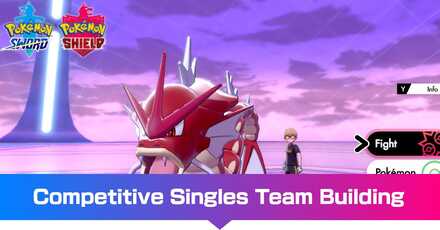 This page discusses the basics of competitive team Singles building in Pokemon Sword & Shield. Read on to learn the basics, such as team synergy and choosing the right EV spread.

Defining the roles your team needs make it easier to choose the right Pokemon to level and train for the competitive scene.

These are the four major roles to consider:

These are Pokemon sent out first at the beginning of the battle. They are either used to scout the opposing team, set up weather or entry hazards, or serve as the frist attacker to establish offensive momentum.

These Pokemon boast high defensive stats, key type resistances, and support moves. Their main role is to take multiple strong hits throughout the battle. Ideally, your team should have both a physical and defensive wall.

These are your primary attackers. Similar to walls, a well-rounded team has both physical and special attackers. These Pokemon are typically fast and have access to moves that hit many types for super effective damage.

These Pokemon can perform a wide variety of roles, and can either support your team offensively or defensively depending on what your team lacks.

This refers to how well two or more Pokemon complement each other through their typing by covering each other's weaknesses.

Gastrodon, on the other hand, has a 4x weakness to Grass-type moves. Corviknight, however, is 4x resistant to that type. Due to how they cover each other's weaknesses, these two make a great defensive core.

This refers to how many types your Pokemon can hit with super effective damage from its moves. Sweepers need good coverage so that they can take down Pokemon that would otherwise resist their main STAB moves.

Hydregion is a potent Choice Specs sweeper well known for its powerful Draco Meteor but it can easily be countered by switching in a bulky Steel-type or Fairy-type Pokemon; the former resisting Dragon-type moves while the latter being completely immune to it.

To counter this, Hydregion always has Flamethrower and Flash Cannon to hit those two types for super effective damage. 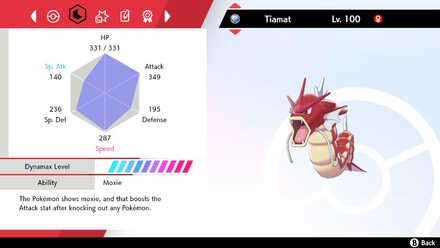 To create an effective EV spread for your Pokemon, you'll have to take a look at its stats and optimize the ones it needs for its role.

For sweepers, EV spreads are often pretty straightforward - with full EV investment on speed and it's primary attacking stat. The remaining 4 EVs are usually invested into HP or either of its defensive stats.

The remaining EVs are placed in Defense because Starmie's typing gives it more resistances to types that predominantly have physical attacks, such as Fighting.

Amoonguss' great mixed defensive stats make it a solid counter to both physical and special sweepers.

The defensive investment is a bit higher because its typing gives it key resistances to types that have predominantly physical attacks and also ensures that the resulting defensive stats are more balanced.

The items your Pokemon hold during battle are just as important as their type synergy and EV spreads. Some held items can drastically increase a Pokemon's stats, provide passive recovery, and even let it survive a guaranteed KO!

Heracross' ability Guts boosts its attack by 50%, while also nullifying the attack drop from burn. Giving it a Flame Orb ensures Heracross will get an attack boost at the end of its turn!

Keep in mind that in competitive battles, you can't have two Pokemon or more hold the same item. This means that while you may have two walls on your team, only one of them can hold a Leftovers.

See more comments (3 Comments)
Opinions about an article or post go here.
Opinions about an article or post
We at Game8 thank you for your support.
In order for us to make the best articles possible, share your corrections, opinions, and thoughts about "Basics of Competitive Singles Team Building" with us!
When reporting a problem, please be as specific as possible in providing details such as what conditions the problem occurred under and what kind of effects it had.