How to Build a Defensive Team | Pokemon Sword and Shield 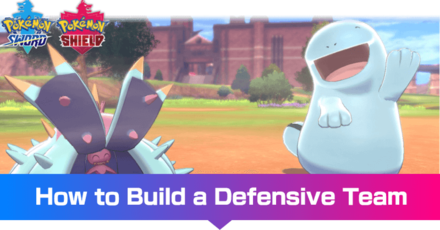 This page explains everything you need to know about defensive teams in Pokemon Sword & Shield. Read on to learn what a defensive team is, what strategies to use with one, and what countermeasures to use against one.

What Is a Defensive Team?

A Team Made Up of Pokemon with High Defenses

This team archetype is made up of Pokemon that can take a lot of attacks and stall out your opponent.

Endure and Win with Defensive Pokemon

To win with this kind of team, you have to stall out your opponent with recovery moves and moves that deal constant damage like Toxic. You also have to look for the gaps in your opponent's armor and strike when the opportunity presents itself.

How to Defeat a Defensive Team

Use These Strategies to Break Past These Walls

You need to build these strategies into your team as it will be difficult to defeat a properly set-up defensive team.

Pokemon That Can Use Taunt

This is a list of Pokemon that can use Taunt.

OHKO moves are effective against defensive Pokemon that try to stall you out as you'll get a lot of chances to hit the move.

This is a list of Pokemon that can learn OHKO moves.

3. Force Choice Items on Them

With moves like Trick and Switcheroo, you can force choice items like the Choice Scarf on opponent Pokemon so that they're locked into one specific move until they switch out.

Pokemon That Can Learn Trick and Switcheroo

How to Win with a Defensive Team

Use Pokemon With High Physical and Special Defenses

When building a defensive team, you need Pokemon that either have high physical defense or high special defense. Some Pokemon can even have both by using moves such as Stockpile.

You can also choose to use an attacker Pokemon with high defenses. Switch out to this Pokemon when the chance to attack appears.

It's very important that you understand the roles of each Pokemon in your team and that you know how to use them in battle.

Make sure that you're always engaging in favorable type match-ups as much as possible. Switch out when needed.

When the opportunity presents itself, make sure to use moves like Calm Mind and Stockpile to raise your defenses as well.

These are examples of moves that deal consistent damage and that work well with defensive Pokemon.

Try getting a grasp of your opponent's strategy. If you still don't know what their approach is, use stalling moves like Protect, Baneful Bunker, and moves that let you recover HP while you figure out their plan.

In cases where your opponent tries to set up, have moves like Haze ready.

5. Get Ready for Your Opponent's Dynamax

A good defensive Pokemon with a favorable type match-up should be able to weather the storm of your opponent's Dynamax turns. During those turns, use defensive moves and moves that restore HP.

6. Only Use Dynamax When Needed

Dynamax when your opponent is Dynamaxed and protect yourself with Max Guard.

Alternatively, you can also Dynamax to put pressure on your opponent and to force them to switch out.

In these cases, try conserving your HP as much as possible as the winner will be the one with the higher party HP percentage.

TOD refers to Time Over Death. If time runs out during a battle, victory and defeat are determined by the higher party HP percentage.

Strategies Used by the Rental Team

Toxapex and Quagsire work very well with each other. Switch between the two in order to create favorable type match-ups.

When your opponent brings out a powerful special attacker, switch out to Alcremie or Hatterene.

In order for us to make the best articles possible, share your corrections, opinions, and thoughts about 「How to Build a Defensive Team | Pokemon Sword and Shield」 with us!