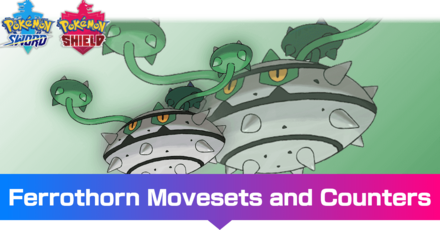 This is a strategy guide for using Ferrothorn in competitive play for the games Pokemon Sword and Shield. Read on for tips on the best Nature, EV spreads, Movesets, Builds, and Held Items to use with Ferrothorn, as well as its strengths and weak points.

How to Learn Ferrothorn's Egg Moves 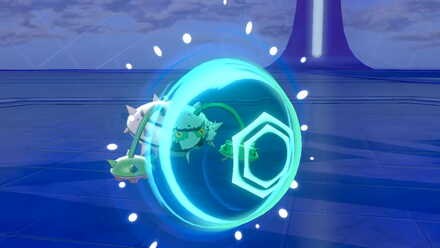 As Ferrothorn doesn't get any recovery moves, it'll be relying on a Leftovers + Iron Barbs strategy to recover indirectly. While using Leech Seed to sap the opponent's HP, it can use Protect to stay on the battlefield as long as possible, cutting down the opponent's HP in the process.

That said, make sure to switch out when you're up against a special Fire-type attacker as Ferrothorn is extremely weak to moves like that. 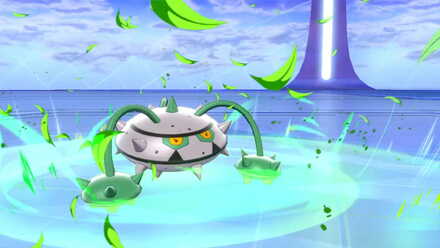 Ferrothorn has a 4x weakness against Fire-types. Therefore, boosting its Attack with Choice Band is an effective way to overwhelm your opponent with Gyro Ball and Power Whip at the start of the battle, especially if your opponent chooses to switch out to a different Pokemon.

How to Use Ferrothorn Effectively

An Ideal Tank for Physical Attacks

Ferrothorn's strongest suit lies in its ability to absorb physical hits. Combined with Leech Seed, it can stack up massive total damage, so in a switch-heavy battle, Ferrothorn proves to be an invaluable asset.

Ferrothorn is a proud member of the Steel type, the Fairy type's great enemy. It's an important Pokemon as an overall counter to Fairy types. As Hidden Power is no more in Sword and Shield, the days where any Pokemon could have Hidden Power Fire and counter him with 4x damage are over, and Ferrothorn stands strong in their wake.

A Great Attacker Under Trick Room

With its incredibly low Speed of 20, the normally last-to-move Ferrothorn becomes a silver bullet under the effects of Trick Room. Together with Gyro Ball, which becomes stronger the slower the user, Ferrothorn comes into its own as a physical sweeper.

Kill It with Fire

With a 4x weakness to Fire, Ferrothorn can be quickly handled with Fire attacks. Any of the Fire-types listed below are easy to use in Ranked Battle and even besides being great Ferrothorn counters, will be a welcome addition to your team.

I'd say a curse + gyro ball build should be here. Increased attack and defense with lowering speed makes gyro ball a beast.

Register as a member and get all the information you want. (It's free!)
Login
Opinions about an article or post go here.
Opinions about an article or post
We at Game8 thank you for your support.
In order for us to make the best articles possible, share your corrections, opinions, and thoughts about "Ferrothorn - Moveset & Best Build for Ranked Battle" with us!
When reporting a problem, please be as specific as possible in providing details such as what conditions the problem occurred under and what kind of effects it had.