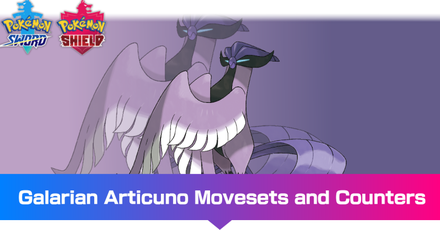 This is a strategy guide for using Galarian Articuno in competitive play for the games Pokemon Sword and Shield. Read on for tips on the best Nature, EV spreads, Movesets, and Held Items to use with Galarian Articuno, as well as its strengths and weak points. 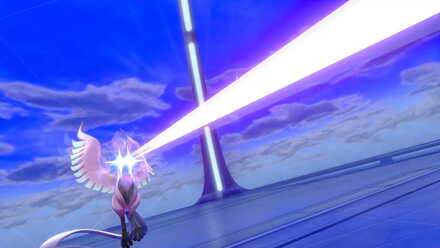 Galarian Articuna has a niche as a sweeper for dedicated Rain Teams, firing off powerful Hurricanes that hit bulky Grass-types, as well as serving as a great check to Toxapex.

Freezing Glare is Galarian Articuno's main STAB move, and has a 10% chance to freeze the target. Hurricane is its secondary STAB move and has perfect accuracy in Rain. It also has a 30% chance to confuse the target.

The remaining moves are for coverage. Shadow Ball hits Ghost-types and opposing Psychic-types like Cresselia, while Ancient Power hits opposing Flying-types. The latter also has a 10% chance to raise all of Galarian Articuno's stats by 10%.

We're using a simple special attacking EV spread with full investment in Special Attack and Speed, with the remaining EVs placed in Defese to round off its bulk.

Competitive is Galarian Articuno's only ability, raising its Special Attack by two stages when one of its stats is lowered. This makes it a great check to Intimidate users such as Landorus and Gyarados, as well as Defog users such as Tapu Fini.

Life Orb boosts the power of its moves by 30% at the cost of some recoil damage. This is the better choice if using Articuno as the main Dynamax sweeper.

Choice Specs is a stronger held item that boosts the power of Galarian Articuno's special moves by 50%, but prevents it from switching moves.

How to Use Galarian Articuno Effectively

Galarian Articuno is a great candidate for lead sweeper and Dynamax user for teams. Since most teams lead with Intimidiate users, Galarian Articuno can get a +2 Special Attack boost off the bat thanks to its Competitive Ability and then Dynamax afterwards.

Access to Max Airstream is another reason why it's a good choice to lead with Galarian Articuno as it instantly boost it and its team's speed by one stage.

How to Build a Team with Galarian Articuno

Galarian Articuno is easy to fit in many teams, especially if used as a lead or Dynamax user. It's also a powerful Expanding Force user in Doubles and its Competitive Ability almost guarantees it gets a +2 Special Attack boost.

Counter it with Dark-type Pokemon

Galarian Articuno struggles against Dark-type Pokemon as it doesn't have a reliable way to check them. Some Dark-types even resist Galarian Articuno's secondary Flying STAB and doesn't care much about confusion.

Register as a member and get all the information you want. (It's free!)
Login
Opinions about an article or post go here.
Opinions about an article or post
We at Game8 thank you for your support.
In order for us to make the best articles possible, share your corrections, opinions, and thoughts about "Galarian Articuno - Moveset & Best Build for Ranked Battle" with us!
When reporting a problem, please be as specific as possible in providing details such as what conditions the problem occurred under and what kind of effects it had.