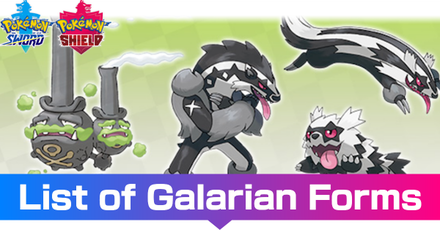 The page lists all the Galarian Forms available in the Galar Region in Pokemon Sword and Shield. Read on for information on Galarian Forms' new types and their unique evolutions.


Differences of the Original and Galarian Forms

The original forms of a Pokemon go through a change in appearance, type, abilities and even the moves they can learn in regional forms.

Some Pokemon get an additional type; some are changed completely. As the type changes, the abilities also change.

In some special cases, regional forms have a third evolution that the original does not. Take Linoone as an example, that has Obstagoon as its evolution. The tables below show comparison between the Orginal and Galarian Forms.

Steel-type could actually be better than the Normal-type Meowth as Steel-type can withstand more Pokemon types.

Galarian Stunfisk, unlike the original, has only one ability, Mimicry, which has the unique effect of changing its type depending on the terrain.

Climate change has affected Pokemon, too, that is why Galarian Corsola is said to have turned into a Ghost-type because it could not survive the effects climate change.

You can find a warning on Galarian Corsola's Pokedex entry in Pokemon Shield.


“Sudden climate change wiped out this ancient kind of Corsola. This Pokémon absorbs others' life-force through its branches.”
Source: Pokemon Shield Pokedex entry

For from its original Fire typing, Galarian Ponyta becomes a Psychic-type Pokemon in the Galar region, gaining a new moveset, abilities and appearance.

Expanding on its pre-evolution Galarian Ponyta, Galarian Rapidash becomes increasingly useful through its acquisition of a Fairy secondary typing, allowing it to resist Bug and Dark-type moves.

Weezing is now a dual-type Pokemon in the Galar Region, gaining a Fairy typing in its Galarian form in Pokemon Sword and Shield.

Galarian Yamask is a dual-type Pokemon in the Galar Region, gaining a Ground typing in addition to its original Ghost type. Galarian Yamask also has a different evolution in the form of Runerigus.

The Galarian version of Slowpoke retains its Own Tempo ability but has its Oblivious ability replaced by Gluttony, which makes it consume the berry it is holding early. Galarian Slowpoke also changes its type coverage from losing its Water attribute.

Galarian Slowbro becomes a Poison/Psychic type while also changing its ability completely to Quick Draw, which might probably be tied to Galarian Slowbro using its shell as a hand-cannon.

Post (0 Comments)
Opinions about an article or post go here.
Opinions about an article or post
We at Game8 thank you for your support.
In order for us to make the best articles possible, share your corrections, opinions, and thoughts about "List of Galarian Forms" with us!
When reporting a problem, please be as specific as possible in providing details such as what conditions the problem occurred under and what kind of effects it had.