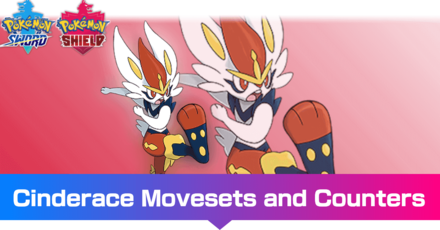 This is a strategy guide for using Cinderace in competitive play for the games Pokemon Sword and Shield. Read on for tips on the best Nature, EV spreads, Movesets, and Held Items to use with Cinderace, as well as its strengths and weak points.

How to Learn Cinderace's Egg Moves 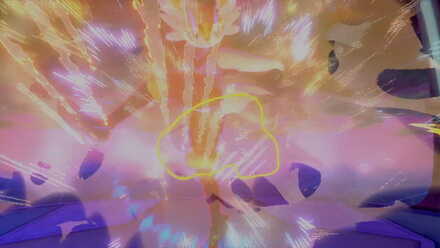 One of Cinderace's many strengths is the increased power of its moves since it always receives STAB thanks to Libero. When used in tandem with a Life Orb, its attacks essentially receive a 1.95x damage multiplier. Partnered with its versatile moveset and great offensive base stats, Cinderace is a threat to be reckoned with.

Pyro Ball is a strong 120 BP move that may also leave the target with a burn. When Dynamaxed, it can be used as Max Flare where it becomes a 140 BP move while also setting up the sun, further strengthening the power of this Fire-type move. Alternatively, if Gigantamaxing Cinderace, Pyro Ball will become G-Max Fireball, a 160 BP move that ignores its enemy's ability like Mimikyu's Disguise.

After Dynamaxing, Cinderace can use moves like Max Knuckle (from High Jump Kick) and Max Airstream (from Bounce) as STAB moves, while using their effects to raise its Attack and Speed and further enhance its sweeping potential.

Sucker Punch is a good priority move for dealing damage to faster sweepers who may try to outspeed and take Cinderace out. This is especially useful if you haven't raised your speed from Max Airstream yet.

This build utilizes as a standard physically offensive spread with the rest of the EVs invested into Sp.Def.

Advantages of Jolly vs. Adamant

This moveset anticipates going up against other Cinderaces, so we've used a Jolly Nature here. That said, an Adamant Nature has the potential to take down a HP/Def-focused Snorlax in one hit with High Jump Kick, so it's worth considering as well.

Still, as Snorlax builds frequently run Protect, play carefully to make sure your High Jump Kick doesn't backfire on you.

Libero gives Cinderace the power to use all of its attacks as STAB moves, and thanks to its wide movepool, this allows it to handle itself against a wide range of opponents. This also allows Cinderace to be very flexible defensively since it can change types at will.

How to Get Libero Cinderace

A free Scorbunny with the Libero Ability is available via Pokemon HOME. Learn how to get all three Galar Starters with Hidden Abilities and transfer them to Pokemon Sword and Shield with our guide below:
How to Get & Transfer Hidden Ability Starters from Pokemon HOME

Together with its new Hidden Ability, Libero, it can use a Life Orb to further boost its attacking power. 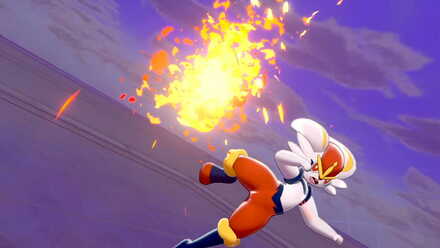 As an alternative to the Libero moveset, this build takes advantage of the boost from Blaze. It may not give STAB on the moves anymore, but Cinderace's versatile moveset can still help in this regard.

Pyro Ball is a strong 120 BP move that may also leave the target with a burn. When Dynamaxed, it can be used as Max Flare where it becomes a 140 BP move while also setting up the sun, further strengthening the power of this fire-type move.

After Dynamaxing, Cinderace can use moves like Max Knuckle (from High Jump Kick) and Max Airstream (from Bounce) as STAB moves, while using their effects to raise its Attack and Speed and further enhance its sweeping potential.

Sucker Punch is a good priority move to deal damage to faster sweepers who may try to outspeed and take Cinderace out. This is especially useful if you haven't raised your speed from Max Airstream yet.

This build utilizes as a standard physically offensive spread with the rest of the EVs invested into Sp.Def.

After Blaze has taken effect, it can take advantage of its high base Attack to deal reliably heavy damage from then on, making this set a viable alternative standing in contrast to the Libero moveset.

This set uses Blaze together with a Focus Sash to survive a hit from max HP and hit back hard with Blaze's damage boost.

Similar to the Singles build, Pyro Ball, Bounce, and High Jump Kick are intended to be used when Cinderace is Dynamaxed, with Max Flare setting up sunlight and thus further powering up Pyro Ball and Max Airstream and Max Knuckle boosting Cinderace's Speed and Attack respectively.

U-turn can be used in cases where your opponent will switch in with a Pokemon that will counter Cinderace, allowing to safely go back to your party while dealing damage.

Life Orb is still held to synergize with Libero's effects that allows Cinderace to have STAB on all of its attacks.

This build aims to turn the tables on teams stacking up hazards against your Pokemon.

Court Change reverses any hazard setups done by your opponent to your side of the field, thereby transferring Stealth Rock or Toxic Spikes from your side to the opposing team.

Additionally, you can also use Court Change if your opponent has set up Reflect and Light Screen or Tailwind, wasting their turns and allowing you to utilize their setup.

U-turn can be used to safely switch out Cinderace, while Bounce can be used as Max Airstream to boost Cinderace's Speed if it is Dynamaxed.

With Cinderace being initially a Fire-type before any Libero changes happen, your opponents will try to deal with it by setting up Stealth Rock.

Let it hold Heavy-Duty Boots to ignore any hazard effects and damage, which also allows it to safely switch in and out anytime while Stealth Rock is still present on your side of the field.

How to Use Cinderace Effectively

Use any attack with 1.5x damage

With its Hidden Ability Libero, Cinderace is able to change its type to match any move directly before using it. This has the effect of giving all moves the same-type attack bonus (STAB), which increases the moves damage to 1.5x its standard amount.

With a wide movepool to choose from, Cinderace can change its build to match its party, and can even cut out Fire-type moves without losing STAB. This makes it all the more malleable and harder for opponents to predict its moveset.

Cinderace's quickness and variety of attacks make it easy to attack first and deal damage to a wide range of opponent types.

Cinderace's special attack, Pyro Ball, deals the same high damage and has the same Burn effect as Flare Blitz, without the downside of recoil.

Can take on the previously banned Zacian

Cinderace takes half damage from both of Zacian's Fairy and Steel-typings as well as having the ability to OHKO it with Pyro Ball. It can also change its typing to Dark or Pyshic with Sucker Punch or Zen Headbutt to decrease or eliminate damage from Shadow Rider Calyrex or Eternatus.

Cinderace is quick and powerful, but its HP and Defense are relatively low. To survive against opponents with type and attack advantages, team up with these Pokemon to switch out with using U-Turn.

These teammates, including Cinderace, are all within the top 3 tiers for Ranked Battle. By using these Pokemon which can generally handle most opponents, you can eliminate most of the potential threats to Cinderace, leaving only those which it can handle and limiting your opponent's options for switching.

How to Build a Team with Cinderace

Dynamax Attacker in an Offensive Team

Zapdos makes a great partner to Cinderace being able to take Ground and Water-type attacks that may be aimed at Cinderace. With its Static ability, it also serves the function of a paralysis-spreader that can cripple the offensive momentum of enemy teams. Access to Volt Switch helps Zapdos keep the momentum going into favorable matchups when used properly.

Cinderace's access to Fighting-type moves covers Zapdos' weakness easily. As the main powerhouse of the team, Cinderace should take advantage of boosts from Max Airstream and Max Knuckle to be set up for success.

Rillaboom offers some utility for the team, in the form of Knock Off and Grassy Terrain. The health regeneration from Grassy Terrain can help Cinderace's survivability thanks to the provided recovery. Rillaboom's type advantages versus Cinderace's weaknesses helps a lot. 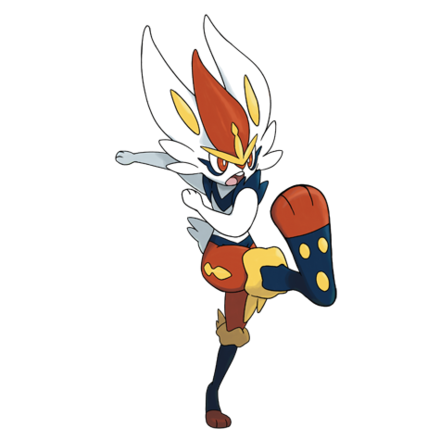 Use Pokemon Whose Weaknesses Are Hard to Strike

Every time Libero Cinderace uses a move, it will become the same type as the move, making it even stronger. To counter this, try to use Pokemon that have the same type as moves Cinderace can't learn. If Cinderace switches to a type that isn't Fire it will also become susceptible to Will-o-Wisp to take down its attack.

Protect Yourself With High Defense

Cinderace is incredibly fast, making it difficult to outspeed, so it's better to use Pokemon that can take hits and aim for its weak point rather than trying to act before it.

Use Counter With a Focus Sash

Since Cinderace is primarily a physical attacker, using a Focus Sash to survive a hit and striking back with Counter is a good way to deal with it. This can work even when Cinderace is Dynamaxed.

See more comments (4 Comments)
Opinions about an article or post go here.
Opinions about an article or post
We at Game8 thank you for your support.
In order for us to make the best articles possible, share your corrections, opinions, and thoughts about "Cinderace - Moveset & Best Build for Ranked Battle" with us!
When reporting a problem, please be as specific as possible in providing details such as what conditions the problem occurred under and what kind of effects it had.