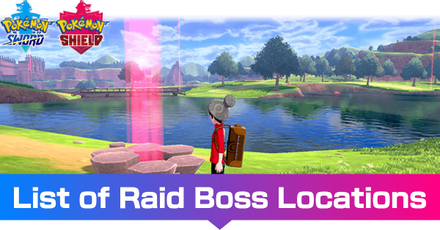 This is a list of Raid Bosses and where they are found in the games Pokemon Sword and Shield. Read on for information on each Raid Boss, whether it has a Hidden Ability, and which versions of the game it is available in. Updated with Dynamax Adventure information!

What are Raid Bosses?

Raid Bosses are the Pokemon encountered in Dens in the Wild Area. When a beam of light comes out of Den, players can find a Pokemon there. Sometimes, a thick pink beam of light will come out of a Den, indicating a rarer or Gigantamax Pokemon; this is called a Rare Den.

Learn more about how to start battles with Raid Bosses and join them with your friends with our guide down below.

How to Start and Join Max Raid Battles

Click a link below to jump to a list of Raid Bosses from each generation and where they appear.

Legendary Pokemon from previous generations appear in the new feature of The Crown Tundra, Dynamax Adventures. Here you can find a list of the Legendaries waiting for you to catch them at the Max Lair!

Post (0 Comments)
Opinions about an article or post go here.
Opinions about an article or post
We at Game8 thank you for your support.
In order for us to make the best articles possible, share your corrections, opinions, and thoughts about "List of Raid Boss Locations" with us!
When reporting a problem, please be as specific as possible in providing details such as what conditions the problem occurred under and what kind of effects it had.