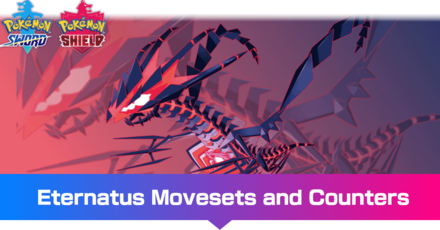 This is a strategy guide for using Eternatus in competitive play for the games Pokemon Sword and Shield. Read on for tips on the best Nature, EV spreads, Movesets, and Held Items to use with Eternatus, as well as its strengths and weak points. 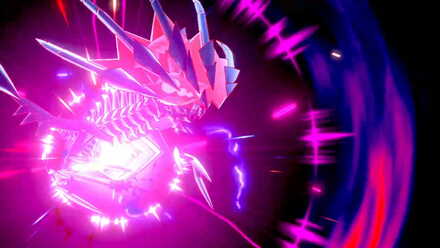 This build focuses on Eternatus' high Special Attack to take out its enemies. With its high speed it can easily get a headstart and hit its foes hard. With Dynamax Cannon dealing two times damage to Dynamaxed Pokemon, Dragon-types will always take massive damage.

Dynamax Cannon and Sludge Wave serve as Eternatus' main STAB moves. Keep in mind that Dynamax Cannon deals double damage to Dynamaxed opponents so be sure to take advantage of that when you can.

Flamethrower serves as a fantastic coverage move to deal with Steel-types who would normally render Eternatus' STAB moves ineffective.

Shadow Ball rounds out the moveset as another coverage move that has the added benefit of having a chance to reduce the enemy's Special Defense.

We're using a simple special attacking EV spread with full investment in Special Attack and Speed, with the remaining EVs placed in HP for a little extra bulk.

Choice Specs is a strong held item that boosts the power of Eternatus' special moves by 50%, but prevents it from switching moves.

Life Orb boosts the power of its moves by 30% at the cost of some recoil damage, a better chocie if you want more move options. 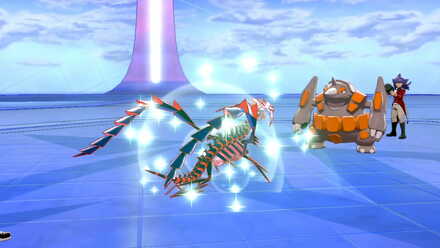 This build relies on Eternatus' ability to stall enemies with Pressure and DoT moves. Due to Eternatus being a Poison-type, Toxic has a 100% accuracy, so it can chip away at enemy Pokemon's HP while bulking itself up with Cosmic Power.

Cosmic Power increases Eternatus' Defense and Special Defense by 1 stage per use so it can withstand attacks. This is supported by Recover, allowing it to heal itself by 50% of its HP, keeping it alive while it buffs itself.

For damage, Eternatus has the 100% accuracy Toxic to slowly take down its foes' HP while boosting its stats and healing itself. Flamethrower is its only direct offensive move, allowing it to hit Pokemon that aren't affected by poison like Ferrothorn.

This EV spread aims to let Eternatus be bulky as possible. We maximize investment on Defense to capitalize on its natural bulk against generally Physical attacking types such as Fighting and Grass-types.

44 Sp.Def is mostly to capitalize on Dragon and Poison's resistances to Grass/Water/Fire/Electric-types.

For this build Eternatus is using Black Sludge which heals1/16 of its max HP every turn.

This Eternatus was used by Japanese competitive player Kamonegi Nabe to reach 18th place in the current Ranked Battle Season.

It's a bulkier attacking set that has enough natural bulk to withstand attacks and enough HP to get great recovery from its Black Sludge held item.

Flamethrower serves as a fantastic coverage move to deal with Steel-types who would normally render Eternatus' STAB moves ineffective.

Toxic allows it to cripple walls such as Chansey and Blissey. It's also a great move to use when you expect a switch.

Substitute is its last move and protects Eternatus from opposing Statuses such as Thunder Wave. When used in conjunction with Toxic, Eternatus can stall opposing walls while still hitting hard with its main attacking moves.

76 HP EVs ensure that it gets as much recovery as possible from its Black Sludge held item, allowing it to easily recover lost health from Substitute in fewer turns.

252 Sp.Atk and 180 Spd EVs ensure that Eternatus still hits as hard and as fast as possible, and can potentially surprise potential checks and counters that are expecting a more defensive Eternatus.

We're giving Eternatus a Black Sludge for some much-needed passive recovery at the end of every turn.

How to Use Eternatus Effectively

Eternatus' signature move, Dynamax Cannon, deals double damage to Pokemon that are Dynamxed. This means that regardless of if a Pokemon is Dynamaxed or not, they will still take the same amount of damage.

As only Steel and Fairy-type Pokemon can resist or negate Dynamax Cannon's effects, there are plenty of opportunities for it to come into play.

In the story, we were shown Eternatus' Eternamax form, but at this time there is no possible way to use that form or Dynamax Eternatus at all in the game.

How to Build a Team with Eternatus

A Pressure Staller in a Defensive Team

Incineroar is this team's pivot and support Pokemon by spreading status through moves such as Burning Jealousy and lowering the opposing team's offenses with Parting Shot and Intimidate. Its typing also lets it cover Eternatus' weakness to Psychic-types.

Celesteela works well as another bulky member of the team to cover Incineroar and Eternatus' weakness to Ground-types. By using Leech Seed it helps maintain survivability for itself and its teammates. It's Steel-typing also offers key resistances against Water, Fairy, and Fighting-types.

With offensive stats lowered by Incineroar and Leech Seed set up from Celesteela, Eternatus' can safely stall out the opponent with status moves and Recover. This entire core will be difficult to take down easily. 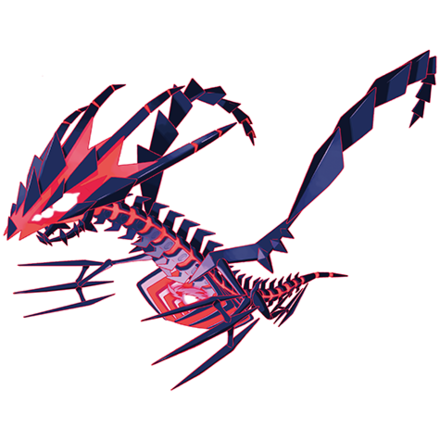 Due to its lack of weaknesses, you will have to resort to Psychic, Ground, or Ice-types to counter it. Aim for its weak points and hit it hard.

Prevent its Actions With Taunt

Against the Pressure Stall Eternatus build, out of its 4 moves only one of them is offensive. Due to this, Eternatus can be taken down a notch by using Taunt with Pokemon strong to Fire-type moves. Pokemon that use its strategy of inflicting status ailments to deal damage over time are also effective.

Register as a member and get all the information you want. (It's free!)
Login
Opinions about an article or post go here.
Opinions about an article or post
We at Game8 thank you for your support.
In order for us to make the best articles possible, share your corrections, opinions, and thoughts about "Eternatus - Moveset & Best Build for Ranked Battle" with us!
When reporting a problem, please be as specific as possible in providing details such as what conditions the problem occurred under and what kind of effects it had.