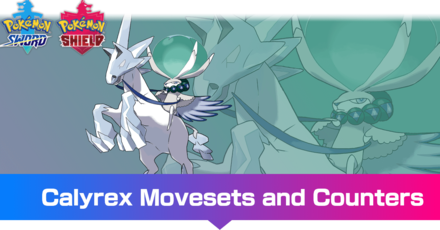 This is a strategy guide for using Calyrex (Ice Rider) in competitive play for the games Pokemon Sword and Shield. Read on for tips on the best Nature, EV spreads, Movesets, and Held Items to use with Calyrex (Ice Rider), as well as its strengths and weak points. 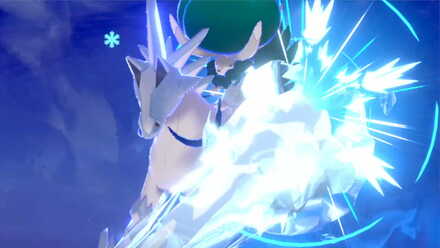 This build focuses on Ice Rider Calyrex's offensive prowess with a Life Orb and Swords Dance while taking advantage of Trick Room. Swords Dance can also be used as Max Guard while Dynamaxed and with Glastrier's Chilling Neigh Ability bundled into Calyrex's As One Ability, it can boost its Attack even further upon KOing an enemy, further strengthening Glacial Lance with its base 130 power.

Glacial Lance is Calyrex's main STAB move that, with a base power of 130, can easily take down bulkier Dragon or Ground-type Pokemon. It can also be used as Max Hailstorm while Dynamaxed to start up hail for an extra bit of damage. High Horsepower is one of our coverage moves, allowing it to strike back at Steel, Rock, or Fire-types that threaten its Ice-typing.

Seed Bomb is another option for coverage against Rock and Ground-types that can set up Grassy Terrain when used as Max Overgrowth.

Swords Dance is how Calyrex will buff its Attack power in order to sweep the enemy team, as well as its way to protect itself with Max Guard if necessary.

We're going with full investment into HP and Attack to capitalize on Calyrex's offensive ability with the last 4 into Defense for a bit more bulk.

As One is Calyrex's only Ability, mixing Calyrex's default Unnerve Ability with Glastrier's Chilling Neigh Ability. Not only can enemies not eat berries, but each time Calyrex KO's an opponent, it will get another Attack boost.

The main choice for this build is a Life Orb to give Calyrex a 30% boost to its Attack right from the get-go at the expense of some recoil damage.

Calyrex can also take advantage of a Weakness Policy to buff itself when taking super effective hits from Pokemon like Cinderace, an Assault Vest to protect it from special attackers, or a Lum Berry to heal itself of an Attack crippling burn.

How to Use Calyrex (Ice Rider) Effectively

Due to its incredibly low base Speed stat, Calyrex's Ice Rider form is best used in a Trick Room party. Its signature move, Glacial Lance, has a base power of 130, making it powerful even without Dynamaxing. With its high Attack and durability it can continue to beef itself up with Max Steelspike or Max Quake, making it great when Dynamaxed as well.

Calyrex can either pair itself up with a fast Pokemon like Mimikyu with its Disguise Ability to set up Trick Room or use it itself.

Where to Get Trick Room (TM70)

How to Build a Team with Calyrex (Ice Rider)

Calyrex's Ice Rider form's low speed stat is mitigated somewhat by its immense bulk, allowing it to withstand even super effective attacks despite its multiple weakness.

As a result, it's best used as a Bulky Attacker with Weakness Policy. With its many weaknesses, it's often guaranteed to get a +2 Attack boost!

Calyrex can take advantage of its Ice Rider form's many weaknesses to get a Weakness Policy boost, while Dynamax gives it great bulk and survivability.

Calyrex fills the role of a powerful Dynamax Lead, first boosting its Attack with Swords Dance, and then Dynamaxing to unleash powerful Max Moves.

Slowbro is a great defensive pivot for Calyrex as it resists Fire and Steel-type moves that its weak to. It also has Slack Off and Regenerator to stave off Hail Damage from Calyrex's Max Hailstorm.

Heatran rounds off this team by providing strong Fire and Steel-type STAB moves, while also deterring Fire-types that may want to take advantage of Calyrex's weaknesses.
How to Build an Offensive Team

Trick Room remedies Calyrex's low speed, turning it into a powerful and speedy physical attacker that's hard to stop once it gets a Swords Dance boost.

Thanks to Dusclops' Eviolite-boosted defenses, it has great survivability and can set Trick Room throughout prolonged matches. With Trick Room in effect, Calyrex can then set up with Swords Dance and unleash powerful Glacial Lances at the opposing team.

Reuniclus rounds off this team by providing special coverage, and it can also fill the role of a backup Trick Room setter. 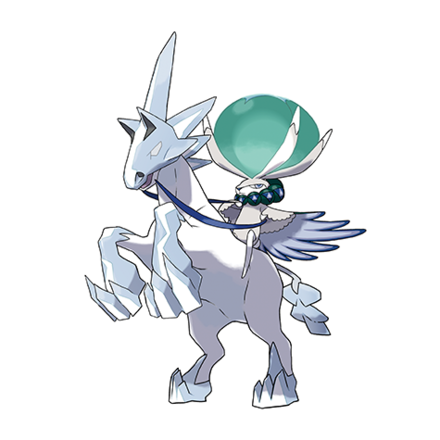 Outspeed It with a Powerful Attacker

With its Speed being as low as it is, your best option for taking out Calyrex is to hit it fast and hard. If Calyrex is using a Weakness Policy, it's best to not target its weakness first until you can safely one shot it to prevent it from getting buffed. Against a Dynamaxed Calyrex, use Pokemon that don't have any weaknesses to its attacks.

In order for us to make the best articles possible, share your corrections, opinions, and thoughts about 「Calyrex (Ice Rider) - Moveset & Best Build for Ranked Battle | Pokemon Sword and Shield」 with us!