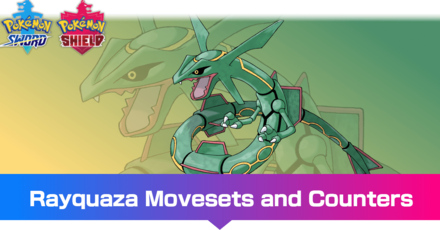 This is a strategy guide for using Rayquaza in competitive play for the games Pokemon Sword and Shield. Read on for tips on the best Nature, EV spreads, Movesets, and Held Items to use with Rayquaza, as well as its strengths and weak points. 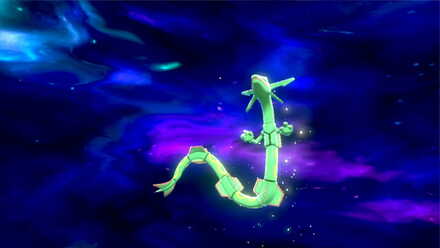 Access to a boosting move and a strong Flying-type STAB makes Rayquaza one of the best Dynamax Leads in the current Series 8 Metagame, and is very difficult to switch into thanks to its great coverage moves.

Outrage is Rayquaza's secondary STAB move but locks it into the attack for 2-3 turns before inflicting confusion. It's best used during Dynamax where it becomes Max Wyrmwind, which lowers the opposing Pokemon's Attack by 1 stage.

Dragon Dance is its last move, boosting Rayquaza's Attack and Speed by 1 stage. It's best used when you're expecting a switch, such as when you're facing a Pokemon that can't do much against Rayquaza. It also becomes Max Guard during Dynamax.

We're using a simple physical attacking EV Spread with a Jolly Nature, with full investment in Attack and Speed so that Rayquaza hits as hard and as fast as possible. The remaining 4 EVs are invested in HP to round off its bulk.

Air Lock is Rayquaza's only Ability. This negates the effects of weather and prevents Pokemon from getting secondary effects from weather, such as the Special Defense boost from Sandstorm.

Rayquaza has several items that it can use for this build.

Life Orb boosts the power of Rayquaza's movest by 30% at the cost of some recoil damage.

Focus Sash prevents Rayquaza from getting knocked out by a strong super effective move, leaving it with 1 HP. 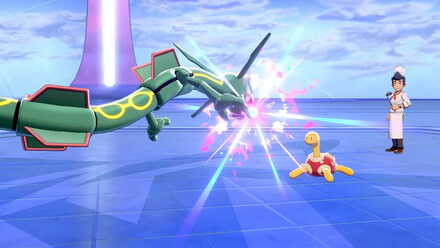 Although it doesn't have the same offensive presence as the physical attacking variants, a special sweeping Rayquaza is just as threatening - boasting a great special movepool that lets it hit its usual checks and counters.

Hurricane is Rayquaza's strongest STAB move and has a 30% chance to inflict confusion. Since Air Lock prevents the effects of Rain Dance, this move is best used during Dynamax where it becomes a strong Max Airstream that boosts Rayquqza's speed by 1 stage.

Draco Meteor is its secondary STAB move and provides strong neutral coverage, although the move decreases Rayquaza's Special Attack by two stages. It's best used during Dynamax where it becomes Max Wyrmwind, which lowers the opposing Pokemon's Attack by 1 stage.

We're using a simple physical attacking EV Spread with a Timid Nature, with full investment in Special Attack and Speed so that Rayquaza hits as hard and as fast as possible. The remaining 4 EVs are invested in HP to round off its bulk.

Rayquaza has several items that it can use for this build.

Life Orb boosts the power of Rayquaza's movest by 30% at the cost of some recoil damage.

Focus Sash prevents Rayquaza from getting knocked out by a strong super effective move, leaving it with 1 HP.

How to Use Rayquaza Effectively

A Powerful and Versatile Dynamax Attacker

Rayquaza is a powerful attacker that can run both physical and special movesets. It's also an attractive Dynamax Pokemon for a team as it has access to Max Airstream, which allows it to boost its Speed by 1 stage every time it uses the move.

This makes the Sky High Pokemon very difficult to switch into or outspeed, especially if it's accumulated enough boosts. Access to several coverage moves also makes it very unpredictable, and it can even beat its usual checks and counters if it's carrying the right move!

Rayquaza's Air Lock Ability prevents the secondary effects of Weather, such as the Special Defense boost from Sandstorm, Speed boost from Chlorophyll and Swift Swim, and the accuracy boost Blizzard gets from Hail - to name a few.

This has its own advantages and disadvantages; while Rayquaza can put a stop to Swift Swim and Cholorphyll sweepers by just entering the match, it also doesn't get any accuracy boosts from its own Hurricane or Blizzard.

Air Lock also prevents the secondary effects of its Max Moves, such as Max Geyser, Max Flare, and Max Hailstorm.

How to Build a Team with Rayquaza

Rayquaza's ability to turn the tide of the battle through its offensive presence and Air Lock Ability makes it a great Dynamax Pokemon for more balanced team compositions, as well as offensive-oriented parties going up against Weather-based teams.

Use it as a Lead Dynamax for Offensive Teams

Both Physical and Special variants of Rayquaza are a great choice for Lead Dynamax in a hyper offense team as it can establish early game offensive momentum with Max Airstream.

Rayquaza has great synergy with Steel-types such as Heatran as both complement each other's typings - with Rayquaza switching into Ground-types while Heatran covers the Sky High Pokemon's Fairy and Ice-type Weakness.

Galarian Darmanita fills the role of a late-game cleaner and revenge killer with Choice Scarf, and is used to handle faster Dragon-types such as Dragapult. It also has great synergy with Heatran. 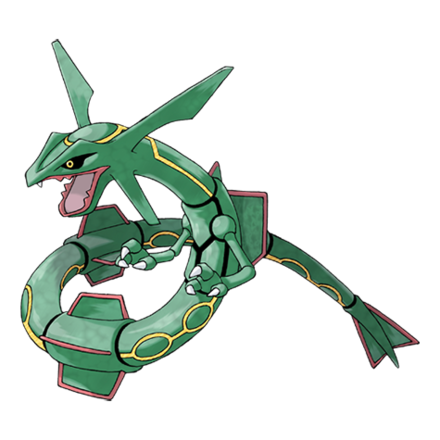 Overpower it with Ice-type Moves

Rayquaza's glaring 4 x Weakness to Ice-type moves and mediocre mixed defenses make it very vulnerable to revenge killers that caryy Ice-type coverage moves, especially ones that are naturally faster or are holding a Choice Scarf.

Check it with a Bulky Steel-type Pokemon

Rayquaza also has trouble handling bulky Steel-types, with some even shrugging off its Fire-type coverage moves. These Pokemon can take a hit from Max Airstream upon switching and can then force Rayquaza to switch with their coverage moves.

Register as a member and get all the information you want. (It's free!)
Login
Opinions about an article or post go here.
Opinions about an article or post
We at Game8 thank you for your support.
In order for us to make the best articles possible, share your corrections, opinions, and thoughts about "Rayquaza - Moveset & Best Build for Ranked Battle" with us!
When reporting a problem, please be as specific as possible in providing details such as what conditions the problem occurred under and what kind of effects it had.