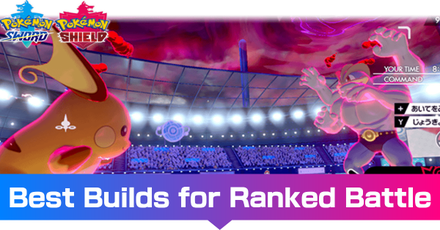 The guides below contain information for the Movesets and best Builds for each Pokemon, including the best Natures, EV spreads, recommended Held Items, and our tier list for how they fare in competitive online play. Read on for the latest advice on how to craft the perfect team for Ranked Battle.

Which Meta Do You Build For?

Series 11 allows players to use two Legendary Pokemon per team for competitive play. These include the following:

Our full list of Pokemon most used in Ranked Battle, broken down into tiers and with detailed explanations of their usefulness and weak points.
Pokemon Tier List for Ranked Battle

Post (0 Comments)
Opinions about an article or post go here.
Opinions about an article or post
We at Game8 thank you for your support.
In order for us to make the best articles possible, share your corrections, opinions, and thoughts about "Movesets & Best Builds for Ranked Battle | Best Competitive Pokemon" with us!
When reporting a problem, please be as specific as possible in providing details such as what conditions the problem occurred under and what kind of effects it had.