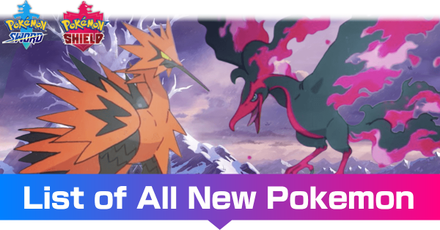 This page lists all New Pokemon from Generation 8, the latest generation of Pokemon introduced in Pokemon Sword and Shield, as well as its DLC expansions The Isle of Armor and The Crown Tundra. Use this page for building your team and filling out your Pokedex!

List of New Pokemon in the Expansion Pass DLC

New Pokemon in The Crown Tundra

New Pokemon in The Isle of Armor

Zarude is a Mythical Pokemon obtainable via preorder tickets for Pokemon the Movie: Coco. Currently, no Western event or release date has been announced for Zarude.

Generation 8 introduced Galarian Forms of previously-introduced Pokemon, which often have completely new Types, Abilities and Moves from their original form.

Pokemon Sword and Shield features Gigantamax forms of some its new Pokemon, allowing them to use a new G-Max Move unique to them.

List of Gigantamax Pokemon and How to Get Them

Post (0 Comments)
Opinions about an article or post go here.
Opinions about an article or post
We at Game8 thank you for your support.
In order for us to make the best articles possible, share your corrections, opinions, and thoughts about "New Pokemon (Crown Tundra Updated) | List of Generation 8 Pokemon" with us!
When reporting a problem, please be as specific as possible in providing details such as what conditions the problem occurred under and what kind of effects it had.