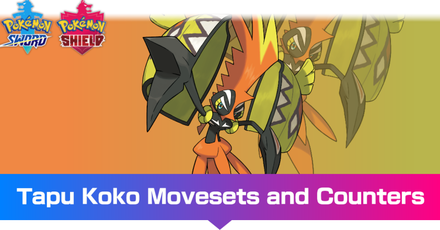 This is a strategy guide for using Tapu Koko in competitive play for the games Pokemon Sword and Shield. Read on for tips on the best Nature, EV spreads, Movesets, and Held Items to use with Tapu Koko, as well as its strengths and weak points.

Thunderbolt is Tapu Koko's main STAB. Dazzling Gleam is its secondary STAB that also hits both opposing Pokemon in Doubles.

We're using a straightforward special attacking EV spread with full investment in Special Attack and Speed. The remaining EVs are placed in Special Defense to round off its bulk.

Electric Surge is Tapu Koko's best ability, instantly setting up Electric Terrain as soon as it switches in. It also boosts the power of Tapu Koko's electric moves and prevents all grounded Pokemon from falling asleep.

Tapu Koko has a lot of options for held item.

Focus Sash lets it survive a super effective hit, while Life Orb boosts its damage by 30% at the cost of residual damage.

Choice Specs lets it hit harder, boosting its special attacks by 50% but restricts it to using only the initial move it used for the turn. Finally, Choice Scarf lets it outspeed its usual checks and counters.

Tapu Koko can forgo an attacking set and fill the role of a support Pokemon, with its naturally high speed letting it set dual screens for its teammates.

Light Screen and Reflect doubles the party's Special Defense and Defense stat respectively for five turns, boosting the team's overall bulkiness - especially if Tapu Koko manages to set up both.

Electric Surge is Tapu Koko's best ability, instantly setting up Electric Terrain as soon as it switches in. It also boosts the power of Tapu Koko's electric moves and prevents all grounded Pokemon from falling asleep.

We're giving Tapu Koko Light Clay, which extends the duration of Reflect and Light Screen to 8 turns instead of 5.

How to Use Tapu Koko Effectively

A Fast and Powerful Offensive Pivot

Whether it's running a physical or special set, Tapu Koko is best used as an offensive pivot instead of an outright sweeper. It's high speed and pivoting moves gives its teammates great offensive momentum, making it a popular choice as a member of an offensive core in Hyper Offense teams.

How to Build a Team with Tapu Koko

Tapu Koko is easy to fit into most teams and isn't restricted to pure offensive teams. Although it's a great pivot in Singles, it's best used in Doubles.

Both physical and special variants of Tapu Koko excel as a lead terrain setter in Doubles, and is always partnered with Pokemon that can take advantage of the instant Electric Terrain it sets up.

Hawlucha makes a great partner for Tapu Koko in Doubles. As soon as both switch in and Electric Terrain is set, Hawlucha consumes its Electric Seed. This boosts its defense while also activating Unburden, which doubles its speed and allowing it to outrun virtually anything in the metagame.

Check out our full article below to learn more about the basics of doubles team building.
How to Build a Doubles Team 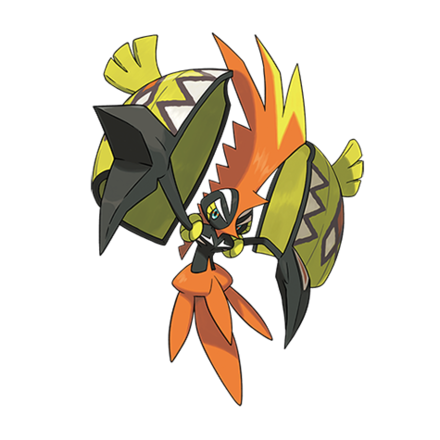 Wall it with a Poison-type Pokemon!

Both variants of Tapu Koko have a hard time overcoming bulky Poison-types. While some of these counters can't outright KO the Electric Tapu, they can put a stop to its offensive pivoting and distrupt overall team momentum.

Register as a member and get all the information you want. (It's free!)
Login
Opinions about an article or post go here.
Opinions about an article or post
We at Game8 thank you for your support.
In order for us to make the best articles possible, share your corrections, opinions, and thoughts about "Tapu Koko - Moveset & Best Build for Ranked Battle" with us!
When reporting a problem, please be as specific as possible in providing details such as what conditions the problem occurred under and what kind of effects it had.