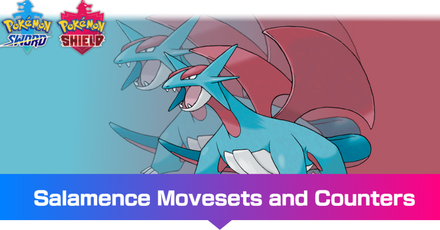 This is a strategy guide for using Salamence in competitive play for the games Pokemon Sword and Shield. Read on for tips on the best Nature, EV spreads, Movesets, and Held Items to use with Salamence, as well as its strengths and weak points. 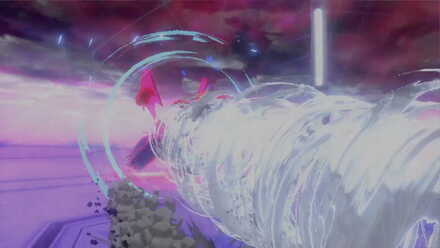 NOTE: when holding Life Orb, it will take 1 extra damage each time it attacks when it has 31 HP IVs. It's best to use a Salamence with 28-29 HP IVs.

Salamence makes a great Dynamax sweeper thanks to its Flying typing, allowing it to use Max Airstream with STAB. It can also decrease the opponent's Attack with Max Wyrmwind, allowing to handle itself in a punch-out with another Dynamax sweeper.

Both of its abilities are potent, with Intimidate granting it effectiveness in switch-heavy battles, and Moxie the better choice for a setup like Stealth Rock + Dynamax sweep.

Dragon Dance boosts Salamence's Attack and Speed by one stage, letting it outspeed its usual checks such as Garchomp. Dual Wingbeat is its main STAB move; not only is it a strong physical Flying-type STAB that breaks Substitute and Sturdy, it also becomes Max Airstream during Dynamax.

Outrage is its secondary STAB, and is a powerful move with good neutral coverage. With one Dragon Dance, it's capable of severely damaging or even outright KO Pokemon that don't have resists or an immunity to it. It's last move is Earthquake, and is an important coverage move that lets Salamence hit Steel-types for super effective damage. 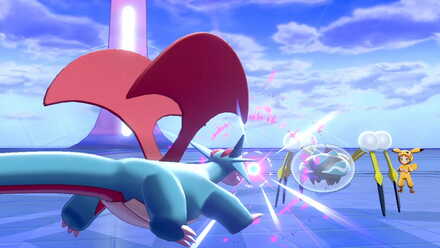 NOTE: when holding Life Orb, it will take 1 extra damage each time it attacks when it has 31 HP IVs. It's best to use a Salamence with 28-29 HP IVs.

The classic Special Attacking Salamence from Generation IV makes a return in Sword and Shield, and is a great alternative to the usual physical attacking sets that can surprise its usual checks and counters.

Due to advantages like its higher base Attack compared to Special Attack and its access to Dragon Dance, Salamence is frequently run as a physical attacker, so this set can break an opponent's expectations.

Draco Meteor is Salamence's strongest STAB move, severely damaging or knocking out Pokemon that don't resist or are immune to it. It avoids the restriction of Outrage, making it a superior choice overall.

Fire Blast hits Steel and bulky Grass-types for super effective damage, while Hydro Pump hits physically defensive Ground-types that often switch into Salamence, such as Hippowdon and Landorus (Therian Forme). Hurricane also has the potential of confusing the target. All these points combined grant Special Salamence a variety of advantages which its Physical counterpart lacks.

Intimidate is the better choice for this build as it lets Salamence switch into physical attackers easier, with its ability softening the blow of their physical moves.

How to Use Salamence Effectively

Like Gyarados, Salamence is an effective lead Dynamax Pokemon thanks to its Moxie Ability and access to Max Airstream. The Dragon Pokemon's higher attack means it has the ability to KO a wide selection of common leads in the Metagame, which can work to your advantage as it gets stronger as it KOs more Pokemon.

Salamence is one of the better mixed attacking sweeper as it has access to one important coverage move - Hydro Pump. This move lets it beat Landorus, the ever-present all-round counter to all physical sweepers.

The mixed attacking set is especially effective at checking Landorus, as it can feint a physical attacking set with Dragon Dance and do chip damage with its physical moves, and then surprise Landorus with a Hydro Pump afterwards.

How to Build a Team with Salamence

Salamance is a staple in Hyper Offense teams, and while it no longer has the top spot for main physical attacker, it's now a popular lead thanks to its newly acquired physical flying move - Dual Wingbeat.

Use it as a Lead Dynamax Sweeper

While it faces some competition from Lead Dragonite, Salamence is better suited for a more direct and aggressive playstyle thanks to its Moxie Ability.

As a Dynamax Lead, Salamance plays an important role supporting its team with a +1 Speed Boost from Max Airstream.

Metagross, in particular, appreciates the speed boost and synergizes well with Salamance as it can threaten Salamance's Fairy checks and counters. 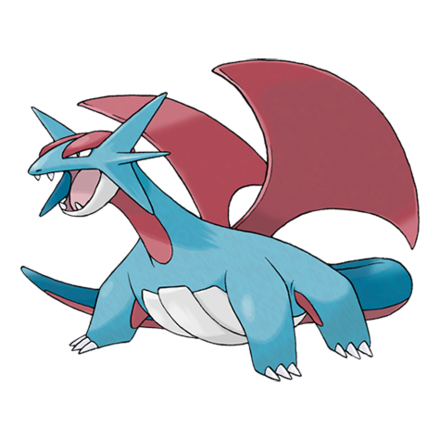 Check it With a Faster Sweeper

Salamance's bast 100 speed seems good on paper, but is relatively mediocre compared to the faster sweepers that are now very common in the current Metagame. Using a faster sweeper, especially Choice Scarf users, forces Salamence to switch or risk getting KO'd.

Counter it With a Fairy Type

Salamence struggles against Fairy-types, especially bulky ones that can survive its coverage moves. These Pokemon, in turn, can threaten Salamence with a KO, force it to switch, or use it as setup fodder.

One possible countermeasure against Salamence is by simply letting it face tanky, durable Pokemon. Salamence cannot learn Taunt, so it will be easy to use status moves.

Post (0 Comments)
Opinions about an article or post go here.
Opinions about an article or post
We at Game8 thank you for your support.
In order for us to make the best articles possible, share your corrections, opinions, and thoughts about "Salamence - Moveset & Best Build for Ranked Battle" with us!
When reporting a problem, please be as specific as possible in providing details such as what conditions the problem occurred under and what kind of effects it had.